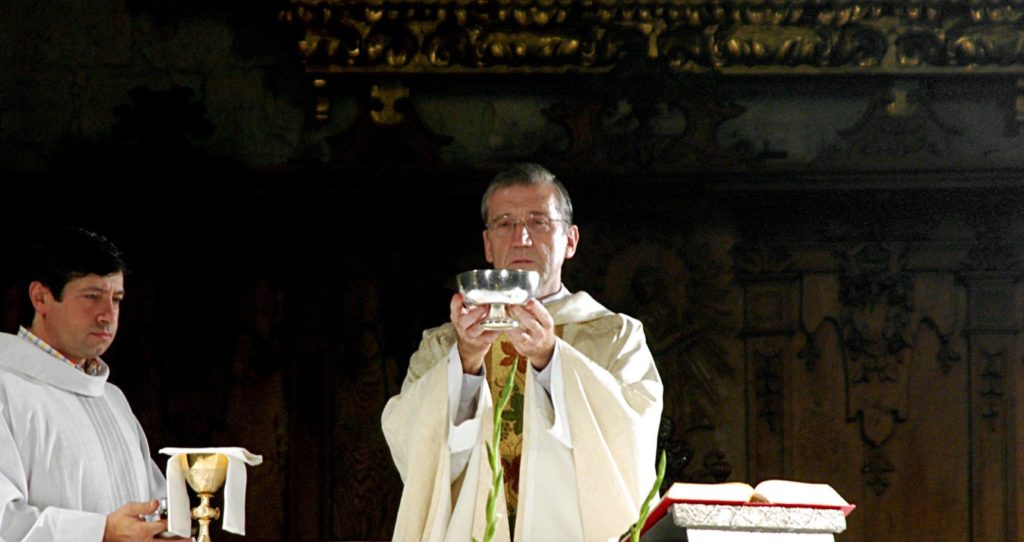 In this series on the Mass we’re aiming to cast light on various movements and aspects of the Mass with the hopes that you will deeply enter in, participate, and get more out of Sunday worship.

You can find the other parts of the series here: The Sign of the Cross, ‘The Lord Be with You’, ‘And with Your Spirit’, The Confiteor, The Kyrie & the Gloria, The Liturgy of the Word and The Creed.

At the Hands of the Priest

In the Liturgy of the Word, God spoke to us in a very intimate way and shared with us the keys and instruction for living to encourage, direct, and comfort us.

Now the entire focus turns from the lectern to the altar. We’re very familiar with altars. In the Old Testament an altar was a place where a sacrifice was made. In Catholic churches the altar is typically very prominent. It’s usually front and center because this is where the most important thing happens at the hands of the priest.

The Liturgy of the Eucharist starts with the Preparation of the Gifts. Typically a family from the church will make their way down the middle aisle with bread and wine. That family represents all of us. They make their entrance, they give to the priest the gifts; not only the bread and the wine but also the financial gifts that were taken in the offering.

All of this will be given to God, and something very special is going to happen: the priest will take the bread and the wine and come back to the altar. They will be placed on the altar, and a series of prayers that will take place there are going to change the bread and wine into the Body and Blood, Soul and Divinity of Jesus Christ.

It’s not a symbol. The Body and Blood are not with the bread and wine. It’s going to literally change. It’s a miracle, and we could only believe this by faith.

The Body and Blood

So as the priest comes forward and begins his series of prayers there’s a couple of things that you will notice and you may not be sure exactly why they’re happening. One of them is that the priest will take a small piece of the bread and he will mix it in the wine.

Then the priest does something very special. Maybe you were an altar boy growing up and you helped with this; the priest will turn to the side and an altar boy will pour water over his hands and he’ll wash his hands as he says a quiet prayer. Anybody who knows about the Bible and sacrifice knows that when a priest washes his hands it means that a sacrifice is eminent.

Then through the words and liturgical prayers that take place, the Eucharistic Prayer, the priest will pray and he will say:

“This is my Blood, the Blood of the new and everlasting covenant.”

When the priest says those words, something happens. The bread and wine are changed into the Body and Blood of Christ. This all comes to a wonderful climax as we all say, “Amen” at the end of the Eucharistic Prayer.

St. Jerome once said that great “Amen” is a celestial thunderclap as heaven says “Amen” to this with us. This is the one and only sacrifice re-presented here on the altar and all altars around the world.

Then after this miracle has taken place, we have the opportunity to commune with the Lamb of God who has given his life for us.

My friends, that grace we receive from the Eucharist is the most powerful thing in the world. It’ll give you strength and power to live out God’s will on earth. It’s a marital embrace that takes place, where the Bridegroom Jesus gives himself to the Bride, the Church. Isn’t that amazing? And that happens on these altars by ordained priests in the Catholic Church all around the world. This is so special. This is intimate. This is powerful. This is what we came for, to be loved.

Then we go back to our seat and contemplate the miracle that has just taken place.

The Parts of the Mass: The Confiteor

The Parts of the Mass: The Kyrie & the Gloria

The Parts of the Mass: The Liturgy of the Word

The Parts of the Mass: The Creed

Suffering and the Mass: The Great Exchange
Jeff Cavins: In Memory of Mother Angelica
A Road Map for the New Evangelization
Jeff Cavins: 'Father Scanlan Guided Me Home'
Has Ascension's free media strengthened your faith?
You can now offer ongoing support for this content with a recurring gift.
Support Ascension