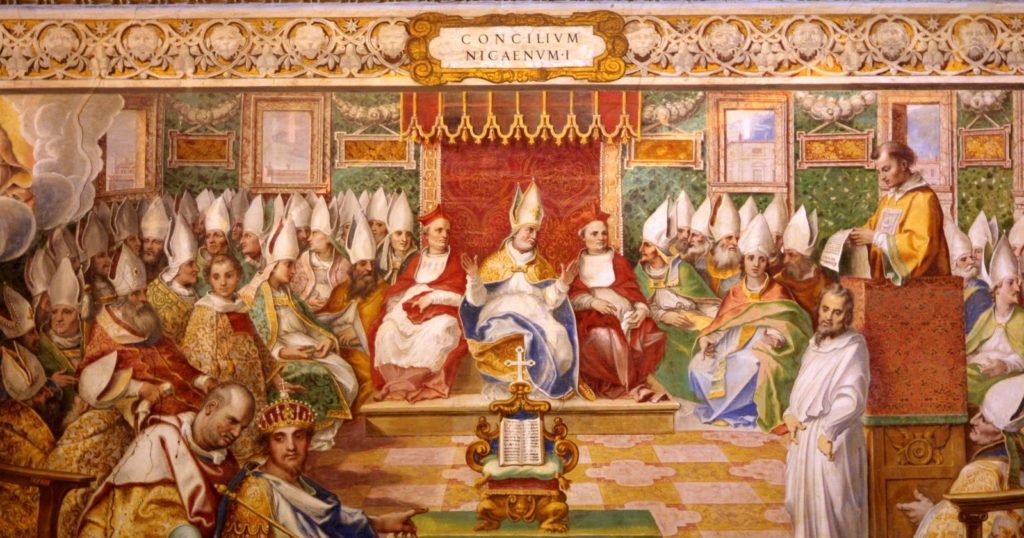 In this series on the Mass we are casting some light on the various aspects and movements of the Mass, with hopes that you will be able to actively enter in and more perfectly participate in this holiest of sacrifices.

The more you put in the more you’re going to get out of it. We’re looking at some of the biblical foundations so that not only you will understand it, but also so you’ll be able to teach your family.

In previous articles we looked at the Introductory Rite, as we prayed “In the name of the Father, and of the Son, and of the Holy Spirit“, and the priest said, “The Lord be with You” and we said, “And with your spirit.” We also looked at how we confess our sins and how we rely on the mercy of God with the Kyrie, and we praise God with the Gloria.

Entering into the Creed

After the homily we end up doing something quite incredible as a congregation. We recite together what we believe. This is called the Nicene Creed. There have been some changes to it, but this is the point where we confess “This is what we believe.”

We’re not the only ones who do that. In the Old Testament, there was a creed for the nation of Israel, from Deuteronomy 6:4, called the Shema:

What It Means to Believe

What does still believing it mean in your life? What difference does the fact that you’re saying four years later, “I still believe it” make in your life? Well, very little if all you’re doing is making mental assent. The Catechism of the Catholic Church tells us the key to understanding the Creed is the word “believe”. This idea of believing has two aspects. (Worthy of note: we used to say “We believe …” but now we say, “I believe … “.)

The first aspect of belief is mental assent. I consciously believe this. I believe what I’m stating. The second aspect of believing, and Pope Benedict XVI brought this out so eloquently in his writings, is this idea that I am entrusting myself to another. Not only do I make mental assent to what I’m saying in the Creed. I’m also entrusting myself to God.

Dr. Edward Sri says so well in his book and program, A Biblical Walk Thorugh the Mass, it’s the difference between math and marriage. You can say 2+2=4, and that’s true. I believe that. Or you can look at your spouse and say, “I believe in you.” That doesn’t just mean I believe my wife exists. It means I’m entrusting myself to her completely, and she’s entrusting herself to me. We believe in one another. I know she exists. I’ve known for forty years that she exists. But I also believe in her.

So when you stand up and say the Creed in Mass you’re not just making a checklist and saying, “I make mental assent to these things. I’m in agreement with the Church, for the most part here.” You’re saying, “Jesus, I’m entrusting myself to you. I give myself to you in all that I state here.”

That’s powerful. There’s a movement of the heart; there’s an act of the will in the Mass when you say the Creed. It’s saying, “I’m all in, Jesus. I just heard you speak to me in your Word, and I want to stand here and confess before all these people I am all in. I will follow you, and trust you.”

That’s the Creed. That’s what we confess.

The Parts of the Mass: The Confiteor

The Parts of the Mass: The Kyrie & the Gloria

The Parts of the Mass: The Liturgy of the Word