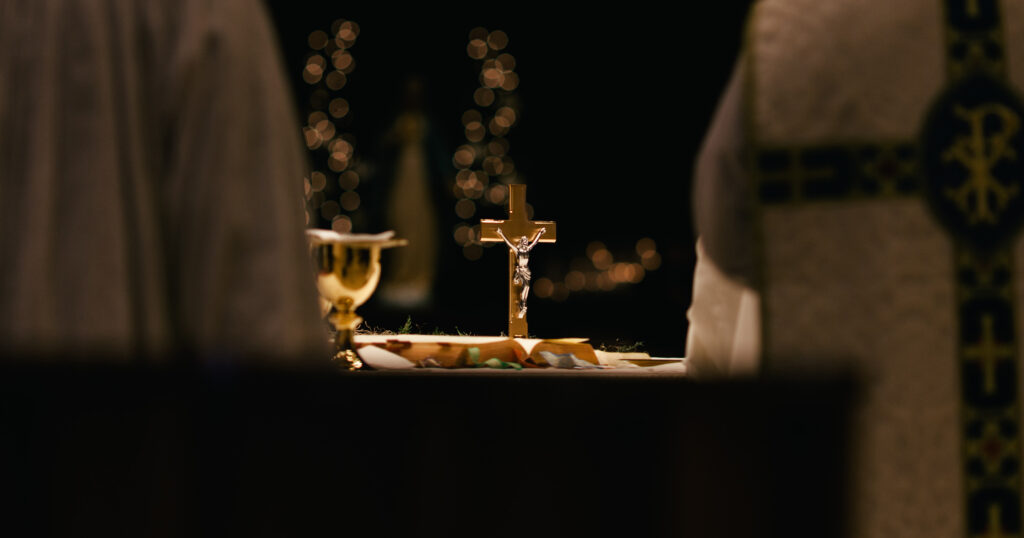 In this series on the Mass I hope to illuminate some of the truths of the Mass and give you some ideas on how you can more actively participate.

At the very beginning of the Mass the priest processes to the sanctuary, and as he does we stand ourselves and he takes his place at the altar. All at once, behind the leadings of the priest, we all say:

That’s how the Mass begins. It doesn’t begin with a “Good morning,” or a “How are you doing today?” but it actually officially begins with the Sign of the Cross.

We Do It All of the Time

We make the Sign of the Cross before meals, before prayers at bed. In my travels, when in an airplane, before we take off I’ll look around and see two or three people making the Sign of the Cross as the airplane makes its ascent into the sky. It’s not because they’re suspicious or scared, but they want to entrust themselves completely to God.

So what are we doing exactly when we make the Sign of the Cross? Well, there’s the action of doing it, and also the words—which are a way of calling upon God. When we call upon God, and call upon that beautiful name of Jesus, we’re present with him. Jesus said:

“For where two or three are gathered in my name, there am I in the midst of them.”

Why We Do It

Just the act of making the Sign of the Cross is very powerful. The Early Church saw it as a prayer in itself. When we make that sign, we are reminding ourselves of several things:

Next Time, Don’t Just Go through the Motions

So saying “In the Name of the Father, and of the Son, and of the Holy Spirit” is imperative. Isn’t it a beautiful thing that God has not kept his name from us? He has not given access to him to just a few people, but he makes himself available to all of us.

So at the very beginning of the Mass, when you say, “In the Name of the Father, and of the Son, and of the Holy Spirit” you are moving from a menial world of problems and headaches out there to a very special time, a very special place in the Mass, kind of a sanctuary in time where you can focus on what’s really important. You can ask God to help you address the problems in your life.

But before you even do that, you need to get to Mass on time, because if you miss that very beginning you’re late. One of the first things we need to do is focus on getting to Mass on time. Then, right during that processional, say to yourself, “I am actively involved. I am engaged. I’m going to put my problems aside, and I am going to take in this moment.

And all of this is “In the Name of the Father, and of the Son, and of the Holy Spirit. Amen.”

What is the priest really saying when he addresses everyone throughout the Mass with, “The Lord Be With You”? Find out in our next installment in this “Parts of the Mass” series.

This article can also be found as a video here.

Photo by Michael Newcomb on Unsplash