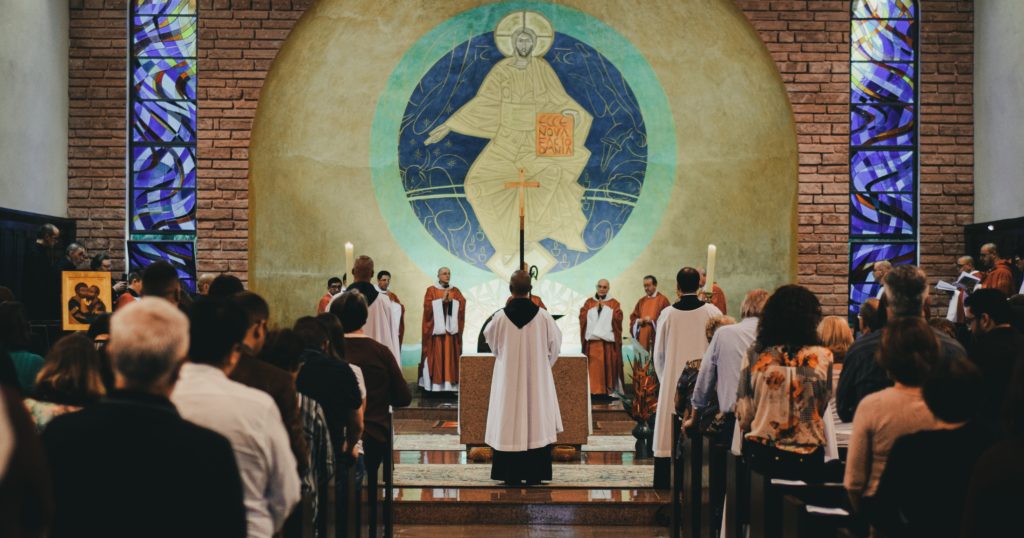 In this series we’re hoping to illuminate various aspects of the Mass and talk about how you can become more actively involved in every aspect of it. In our last post we talked about how the Mass begins with the simple prayer, “In the name of the Father, and of the Son, and of the Holy Spirit.”

Immediately after that, the priest will say to you and to the entire congregation, “The Lord be with you.” We’ve heard those words so many times growing up, and we know exactly what to say after. For years it was, “And also with you.” Now it’s “And with your spirit.”

Sometimes we get into a pattern of saying things in the Mass and we don’t really think about what we’re saying and what it really means. We certainly don’t tend to think much about the biblical foundations of the Mass. We should though because those foundations are tremendous. Every part of the Mass you can find in the Bible and there’s great significance in the Mass, particularly when you know the Bible and its background.

For instance, the words “The Lord be with you” are taken from the Bible. There are a number of cases in Scripture where those words were used. Typically they were directed toward someone who was about to do something really great. God had a big plan for a lot of people in the Bible, and he has a big plan for you. When you come to Mass, God wants to do something in your heart, because when you leave Mass God wants you to do some things out there with your family, at your work, and among your neighbors.

Where to Find These Words in the Bible

The words, “The Lord be with you” said by the priest were heard by people like Gideon, who was the least man from the least tribe and he didn’t think God could use him at all. He was visited by an angel and the words he heard were, “The Lord is with you, you mighty man of valor” (Judges 6:12).

Maybe you feel like Gideon at times, when you don’t have anything going for you at all, and when you hear the words, “The Lord be with you,” that’s powerful. That means God wants to use you. It’s not dependent upon your strengths or your abilities or your wisdom. God wants to do something in your life.

Joshua also heard those words. Moses had died on Mt. Nebo and Joshua was going to take the people to the Promised Land, and God encouraged him with these words:

“as I was with Moses, so I will be with you; I will not fail you or forsake you.”

And who could forget the beautiful story of the Blessed Virgin Mary, when the Angel Gabriel greeted her with the words, “Hail, full of grace. The Lord is with you” (Luke 1:28)? We have many examples in the Bible where people were reminded that God is with them.

What Makes Us Different

I want to encourage you when you hear those words in the Mass, take heart. Maybe you came in with a bunch of problems and obstacles in your life. Know this, O Gideon, God is with you, and if God is with you that makes all the difference in the world. That is what the priest is telling us. Not only is God going to do something here today in the Mass. He also wants to do something in your life. When you hear those words, “The Lord be with you”, in the back of your mind just say to yourself, “I accept that. God is with me. I’m not alone. I’m not abandoned, I’m not an orphan. God is with me.”

Back in the Old Testament it made a difference. The children of Israel were coming out of Egypt as a stiff-necked people. At one point God said to Moses, basically, “I’m going to send an angel with you, and that angel will take you to the Promised Land. If I stay with you I’m going to have to kill you.” Moses said something very important in response. He said, in essence, “God, it’s your presence among us that makes us unique. If you’re not going to go with us, we’re not going. Come with us. Be with us.” And of course God did.

Here is the passage:

I will send an angel before you, and I will drive out the Canaanites, the Amorites, the Hittites, the Per′izzites, the Hivites, and the Jeb′usites. Go up to a land flowing with milk and honey; but I will not go up among you, lest I consume you in the way, for you are a stiff-necked people.”

When the people heard these evil tidings, they mourned; and no man put on his ornaments. For the Lord had said to Moses, “Say to the people of Israel, ‘You are a stiff-necked people; if for a single moment I should go up among you, I would consume you….

Moses said to the Lord, “See, thou sayest to me, ‘Bring up this people’; but thou hast not let me know whom thou wilt send with me. Yet thou hast said, “I know you by name, and you have also found favor in my sight.” Now therefore, I pray thee, if I have found favor in thy sight, show me now thy ways, that I may know thee and find favor in thy sight. Consider too that this nation is thy people.” And he said, “My presence will go with you, and I will give you rest.” And he said to him, “If thy presence will not go with me, do not carry us up from here. For how shall it be known that I have found favor in thy sight, I and thy people? Is it not in thy going with us, so that we are distinct, I and thy people, from all other people that are upon the face of the earth?”

And the Lord said to Moses, “This very thing that you have spoken I will do; for you have found favor in my sight, and I know you by name.”