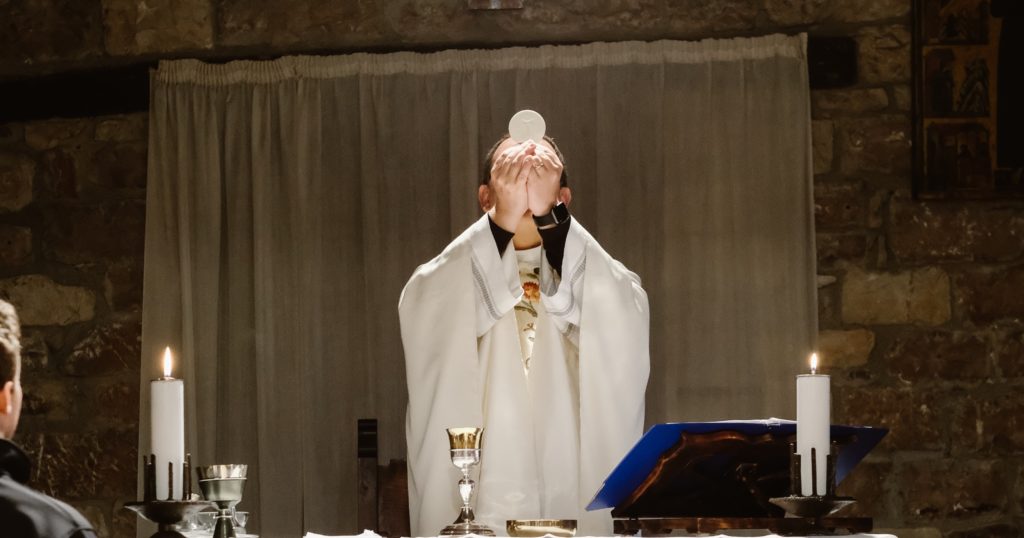 In this series we look to illuminate the various aspects of the Mass, those parts we hear and say so often but may not stop to think what they mean.

Click below for the previous parts in the series:

In our last article we talked about the words the priest says, “The Lord be with you … ” and how the Lord is with us in such a unique way. Any time God used those words in the Bible it meant he wanted to use someone. He was preparing them for something great, and if they didn’t do those great things we wouldn’t have the great story that we call the Bible.

Today, in the modern world, God is saying once again to people (and you, in the Mass!), “The Lord be with you.” God wants to do something great in your life. We have to know and have to accept that so we can do something with that knowledge when we leave Mass. It doesn’t mean we have to do something big necessarily, but many things—if they’re in obedience to Christ, whether it’s loving someone or caring for someone, a word of encouragement, or prayer, or just raising your family—are great things.

More than Just a Response

But keep in mind the response of the laity. Once the priest says, “The Lord be with you,” everybody collectively says, “And with your spirit.”

Wow! What does that mean? We’re actually addressing the spirit of the priest as a congregation. Why would we say that to Father? He’s been through seminary, he’s taken all these classes, he’s probably had a lot of experience, he’s trained, he’s wearing vestments. Who are we to say, “with your spirit”?

As people of God, I’m not and most likely you’re not a part of the clerical priesthood. But we do share in the priesthood of Christ as laity, so we have active participation in the Mass at different points. When we are speaking to the priest and saying, “And with your spirit,” we’re reminding the priest that what he is about to do is so magnificent, so powerful, so miraculous you need the spirit of God moving inside of you. We are telling him to do what he is ordained to do, and that is to bring Christ to us in the Eucharist.

As much as I would like to and as many times as I could try, I could never turn bread and wine into the Body and Blood of Christ. I don’t have that charism or gift. The Holy Spirit will not work inside me that way. I’m not ordained, I’m not a part of that. But Father is, and we’re reminding him of that.

So Much in One Phrase

When we say “And with your Spirit” as a congregation, we are speaking to the most intimate aspect of that priest, his spirit, and saying, “Father, be a priest to us. Be who you are to us. Bring Christ to us.”

It’s kind of an affirmation of his priestly calling, and it’s also a wake-up call for us that what is about to happen in the Mass cannot just happen with anybody. It happens with an ordained priest.

I’m reminded of what Zachariah said:

Some things in life cannot be accomplished by might or power, or my strength. God has to do it. The only way we can receive Jesus Christ, his Body, Blood, Soul, and Divinity, is through the action of the priest.