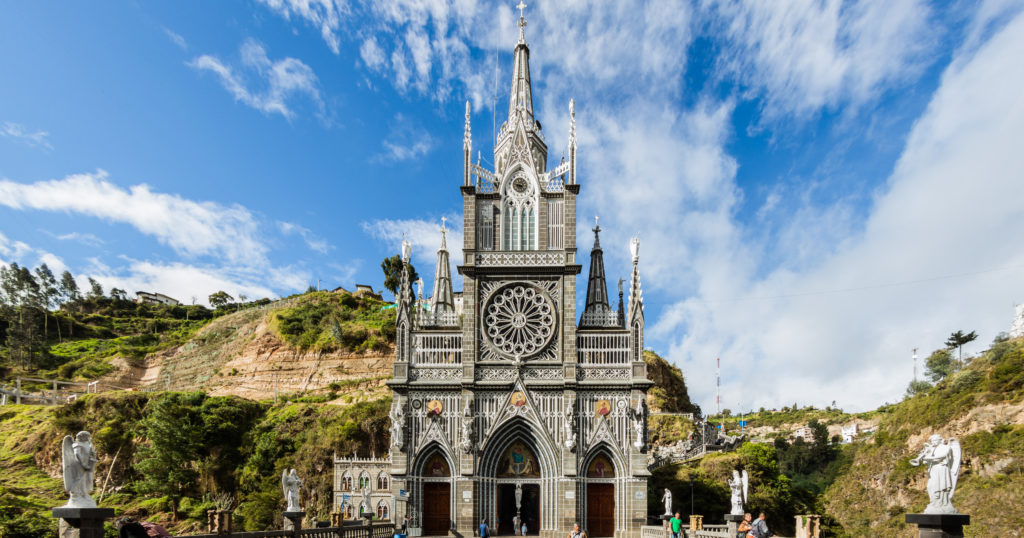 In my last pilgrimage post, I talked about spiritual and practical tips for visiting holy places. Today I am excited to share three lovely pilgrimage destinations from around the globe.

There are literally thousands, if not millions, of places to which you can make a pilgrimage. One of the beautiful things about having so many holy places is that we can study them, and learn more about our faith in different cultures.

I sincerely hope you get a chance to make a pilgrimage soon! Until then, here are three of my favorite pilgrimages.

Sanctuary of the Virgin of Las Lajas (Nariño, Colombia)

This pilgrimage site commemorates a Marian apparition from the eighteenth century. An indigenous woman, Maria Meneses de Quiñones, was caught in a terrible storm near a bridge over the River Guáitara. She cowered in a small cave to hide from the storm and felt a hand on her shoulder. When she turned, no one was there.

A few days later, Maria returned to the cave with her daughter, Rosa, who was deaf and mute. Maria sat on the big stones (or “las lajas”) at the cave entrance. Suddenly, her formerly mute daughter began to shout, “Mama! Look! A lady in white with a little child!” Maria could not see anyone, so she grabbed her daughter and fled.

Rosa continued to insist that a lady in white was calling her whenever they passed the cave. One day, Maria realized that Rosa was missing. She remembered her child’s fascination with the cave and went to look for her there. When she came into the cave, she saw a woman in white and a small child playing with Rosa on las lajas. Maria fell to her knees because of the beauty of the woman and child. She and Rosa kept the cave a secret as best they could.

A few months later, Rosa fell sick and died. Maria was desperate for a miracle. She carried her daughter’s body to the cave, laid her on las lajas, and begged Our Lady to ask her son to bring the little girl back to life.

Maria was filled with joy, and ran to the village with her child to tell them what he had done for her. The villagers came en masse to see the cave where the miracle had happened. They arrived at dawn.

Awesome lights began to come out of the cave, and when they had dispersed, a beautiful image of Our Lady was left on the wall of the cave. Some claim that scientists have since determined that the image is not a painting, but part of the rock itself.

This story was preserved in oral tradition for decades before it was written down, and has a few versions (I have used the one that the sanctuary supports). Villagers built a rustic church to pray their thanksgiving for the miracle. Later, a beautiful cathedral overlooking the River Guáitara was added, declared a minor basilica in 1954. The sanctuary has been a place of devotion for centuries.

One of my favorite North American pilgrimage destinations is the Canadian Martyrs Shrine.

The Canadian Martyrs Shrine honors the eight Jesuit saints who lived and died in the area 350 years ago. They evangelized the local Native Americans, some of whom were martyred with them, which should make them saints, too.  We credit these Jesuit saints with bringing the Faith to Canada, thus strengthening the Church across the continent.

The shrine is located near where St. Jean de Brébeuf, St. Gabriel Lalement, and Huron captives were ritualistically tortured and martyred. The relics of the two saints are inside the chapel. The site also links to a fifty-five mile Pilgrim Route that the faithful can walk.

I mentioned in my last post that I love Lisieux. The basilica, Les Buissonnets, Carmel—all of it was pleasant to see, and a memory that I treasure.

What I didn’t mention is that my sister worked as a tour guide in Lisieux, and said that many of the pilgrims she met had a similar experience to mine: decidedly un-flashy. It’s rare to have overwhelming experiences of grace there. But many pilgrims notice a special kind of peace, defined by the quieting of something inside you that you hadn’t realized until it’s quiet. And if you pay attention, the whole place is humming with the presence of the Martin family of saints.

Sts. Zélie and Louis Martin both wished to enter religious life but were not able to do so. Having their vocation denied could have made them bitter, but they both remained convinced that God had not given up on them. They knew he had a plan. They met in the Norman town of Alençon and married a few months later in 1858. Their love, and their confidence in God the Father’s love, is the means by which they headed a family of saints.

Zélie tragically died in 1877 of breast cancer, leaving Louis to raise their five living daughters (four other children had died in infancy). Thérèse was only four and a half years old.

Louis moved his little family to the nearby village of Lisieux, where his brother-in-law was a pharmacist. The Martins lived in a house called Les Buisonnets. Thérèse was shy and, traumatized by the early loss of her mother, found herself unable to cope with the normal trials of childhood. Then her eldest sister, who had served as a surrogate mother, left for the convent. Then her second eldest sister left. Thérèse had always suffered from scruples, but they became much worse. She began to cry excessively and had to be pulled from school.

Everything changed after Midnight Mass on Christmas 1886. Thérèse describes this as the moment she went from being a child to an adult, all at once.

After Mass,  Thérèse came home expecting to see her shoes filled with presents by one of her older sisters. She was really too old for this tradition, but she loved it anyway. On this night, though, she happened to hear her father say, “Thank goodness it’s the last time we shall have this kind of thing!” Thérèse’s sister braced herself for Thérèse’s tears. But Thérèse surprised her by swallowing her tears, and joyfully opening her presents with her family. It was the first time since her mother died that her tears had not consumed her.

In her autobiography, Story of a Soul, Thérèse wrote of this night:

“On this glorious night the third period of my life began. It has been the loveliest of them all and the one richest with heavenly graces.”

Those graces carried Thérèse through her own entrance to Carmel (which she had to petition the pope for!), many small trials throughout her life, and the illness that finally took her life in 1897. She made many small choices to bring Christ into the world, just like she had that Christmas night when she accepted the grace not to cry during her family’s Christmas celebration. Nearly all the stories from her life are simultaneously profound and anticlimactic. A pilgrimage to Lisieux usually reflects this.

A Spiritual and Practical Guide for Your Next Catholic Pilgrimage

Highlights from a Pilgrimage to Rome

Melissa is a writer, editor, and content strategist based in St. Louis. She has been writing weird things that Catholics seem to like since her freshman year at Benedictine College in Atchison, Kansas, where she graduated with degrees in communications and foreign languages in 2012. Melissa then took her oddball talents to the Fellowship of Catholic University Students (FOCUS), where she helped found the Digital Campus. She has worked on award-winning multi-media stories for the Archdiocese of Denver and contributed to The Catholic Hipster Handbook before moving back home to St. Louis, where she helped parishes start support groups for the bereaved and the divorced and separated.