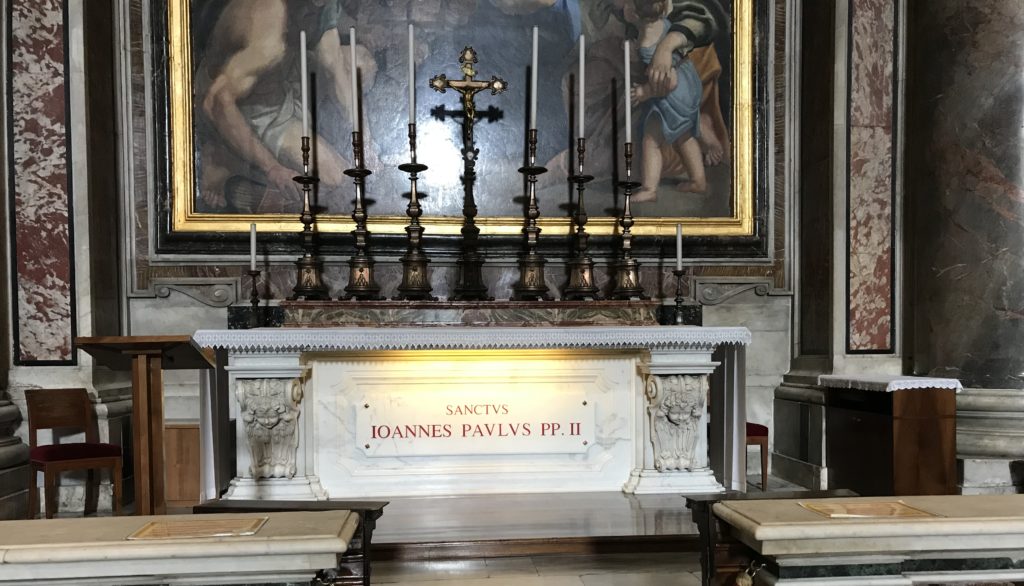 In my mind, there are three clear motivations for a pilgrimage: (1) to visit a place of some clear historical importance (to recall, relive, and reflect upon something that happened there); (2) because a certain saint is buried there (or some sacred relic); and (3) the beauty of the architecture or a famous painting (this is especially profound when one can clearly see the biblical catechesis presented therein). I confess reasons one and two move me the most. But happily, all three often coincide together in the Eternal City of Rome.

San Clemente is one of my favorite places in the whole world. First, the twelfth-century church is beautiful, with a glorious image of Christ and the vines behind the altar ( “I am the vine, you are the branches …” John 15:5). Further, it had always been known that this church was built over the remains of an earlier church, a tradition which was confirmed in the mid-nineteenth century when they discovered the remains of the fourth-century church built by Constantine. One can go down a set of stairs and visit this fourth-century church today.

But it gets even better. In the fourth century, Constantine—after winning the Battle of the Milvian Bridge—and promulgating freedom of religion (he did not make Christianity the official religion of the empire)—set out right away to help build houses of worship for the Church. These churches weren’t built just anywhere: they were built over the remains of the apostles (e.g., St. Peter’s), or over the remains of earlier house churches, some going back to the first century.

San Clemente takes its name from St. Clement, who became the fourth pope toward the end of the first century, that is, the third successor to Peter (after Linus and Cletus). In the current church today, not only can one go down to the fourth-century church—one can also travel down further stairs bringing one in the presence of first-century structures! And part of these first-century remains are believed to be those of a house Clement resided in and where first-century worshippers gathered to celebrate the Eucharist. Hence, this is the reason Constantine built the fourth-century church here, because it was formerly a first-century house church.

What makes this even more moving is that the Colosseum is literally within eyeshot of San Clemente—something like three hundred yards away. Just imagine first-century worshipers singing praises to Jesus and knowing full well the danger that lay just a short distance away! Going to a place like that and praying where first-century Christians prayed is why I love to go on pilgrimage.

Fittingly, the remains of Sts. Clement and Ignatius of Antioch are under the altar of the main church.

The picture below is from outside San Clemente; in the distance one can see the Colosseum, giving one a sense of their proximity.

St. John Lateran is a marvel for a number of reasons. An inscription at the entrance reads: “Ecclesiam Omnium Urbis Et Orbis Ecclesiarum Mater Et Caput,” which translates as: “Of all the churches in the city and the world, this is the mother and head.” St. John Lateran was the first church built by Constantine, begun in 313, and it was the seat of the pope and most important church in all the world for about a millennium. To this day, it is the cathedral church of the pope as bishop of Rome (cathedral comes from “cathedra” meaning “chair”—the cathedral church is where the chair of the bishop resides).

Massive bronze doors adorn the entrance of the church. These doors were taken off of the Roman Forum after the empire in the west fell; they had formerly opened onto the Senate chambers. The likes of Caesar Augustus, Vespasian, and Titus walked through these doors!

As one moves inside, one passes through the main aisle with statues of the apostles on both sides, each depicted in some way to recall their death or something distinctive about them. For example, Thomas is presented with his finger out, signifying his touching of the risen Jesus Christ. Bartholomew, who was skinned alive, is depicted with a knife and holding a piece of his flayed skin.

Further, St. Lateran houses a few very sacred relics: behind the bars above the altar are the heads of Peter and Paul; and the wood in the picture (behind the gold) is said to be taken from the table of the Last Supper.

Finally, St. John Lateran etches in stone the biblical catechesis and typology that has marked the Catholic faith from the beginning. Going down the main aisle above the statues of the Apostles are further statues depicting an Old Testament scene on one side and a New Testament scene on the other. For example, about half way down the aisle, one sees a statue of Jesus carrying the Cross and directly opposite is Isaac carrying the wood for his near sacrifice with Abraham (see Genesis 22).

The amount of saints and relics gracing the city of Rome is truly breathtaking. Just down the road from St. John Lateran is a church called Santa Croce, so named because of the sacred relics therein. As one passes into a side chapel, one beholds some of the very instruments of our salvation. In the middle of the picture below are relics of the true Cross. On the top left is Thomas’ finger encased, the same one that touched the risen Jesus! And on the bottom left are two Roman nails believed to be from the crucifixion. The top right are thorns from the crown of thorns and the bottom right is the plaque that hung on Jesus’ cross, designating the accusation: “Jesus of Nazareth, King of the Jews” (the Latin abbreviation of which is I.N.R.I.). The wood on the far left is said to be part of the cross of St. Dismas, the Good Thief.

Another instrument of the passion is found in a church called Santa Prassede. In a side chapel, one beholds the pillar on which Jesus was scourged!

The famous basilica, St. Paul Outside the Walls, houses under the altar the remains of the apostle. The thought of praying before his tomb gives me chills every time. The second picture below is from the Mamertine prison, which is where Peter and Paul spent the last nine months of their life, undergoing torture and awaiting their eventual martyrdom at the hands of Nero.

And finally, one of my heroes lies in St. Peter’s:

Fittingly, St. John Paul II’s tomb is situated between the Marian statue of Michelangelo’s Pieta and the Eucharistic adoration chapel—just the way I’m sure he would have wanted it.

As I’ve said in an earlier post, the deep Jewish and Catholic tradition of pilgrimage make sense given the Incarnation and God’s continual acting in space and time throughout history. Of course, Jesus is present in every church, in every tabernacle in the most profound of ways. But when the opportunity presents itself, it is uplifting to be in the very spots where the saints walked before us, where sacred and salvation-historical events actually took place.

The important thing is to recognize God’s constant presence among us. We have to overcome the deistic temptation to see God as distant and not really in direct communication with us. With the eyes of faith, we can recognize and practice an awareness of God’s ongoing contact with us, and pilgrimages can help us a great deal in this regard.

How can we better see, with the eyes of faith, God’s loving presence in our midst this very day?

Making Sense of Relics and Pilgrimages

Divine Mercy Sunday & St. John Paul II
Inspiring Moments from My Poland Pilgrimage
Making Sense of Relics and Pilgrimages
What Does the Church Say about Capitalism?
Has Ascension's free media strengthened your faith?
You can now offer ongoing support for this content with a recurring gift.
Support Ascension