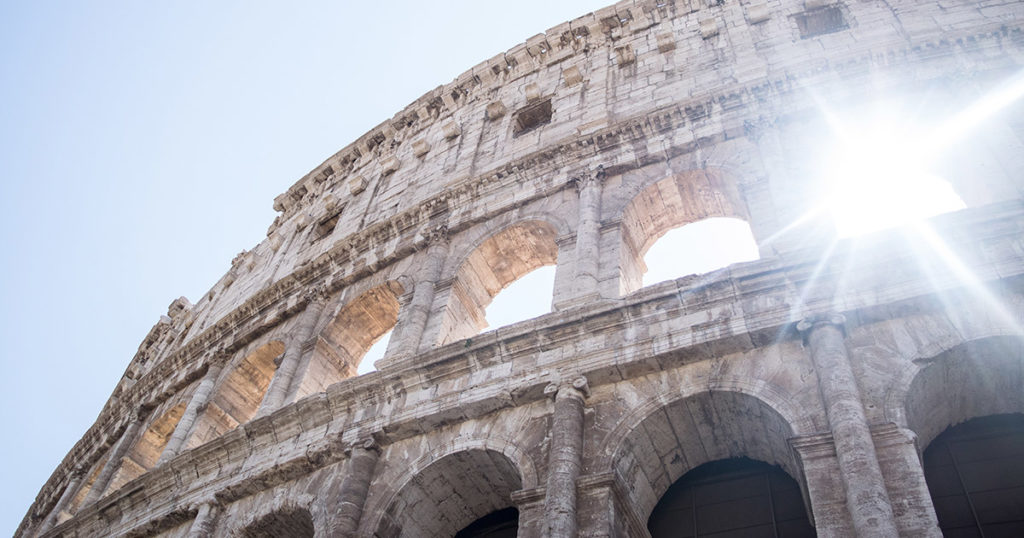 Imagine you are in the Roman Colosseum, circa 100 AD. You’ve just taken your seat as the gates in the middle of the arena have opened. Stepping out into the sun scorched dirt is a small group of men, looking shabby and unkempt, yet strangely calm and collected. The sun bares down on the charred ground as the crowd gets to its feet and begins to roar, as they know full well what’s coming. But you don’t get up with them. You stay in your seat and continue to look on among these strange men, which people around you are starting to call “Christians”.

The bloodthirstiness in the eyes of those around you is most disturbing, but when looking upon the men on the arena floor, you feel a strange sense of serenity. Just who are these men? A moment later, the gates open again, and the lions make their move, and it becomes clear what their prey is. A few minutes later, the sun scorched ground is soaked with blood. The blood of the martyrs. Most of the crowd is in a frenzy, but for you, something is different. Something has taken root in your heart. As these men cried out to someone named “Jesus”, you begin to wonder why they so calmly met their demise. And this is why we can rightfully say that the blood of the martyrs is the seed for the Church.

When St. Ignatius of Antioch was approaching his own martyrdom in the Colosseum, he knew what he was getting into, but he had no fear. Much like St. Stephen the Protomartyr, he knew that he would be with his Lord soon:

“Now I begin to be a disciple of Christ. I care for nothing, of visible or invisible things, so that I may but win Christ. Let fire and the cross, let the companies of wild beasts, let breaking of bones and tearing of limbs, let the grinding of the whole body, and all the malice of the devil, come upon me; be it so, only may I win Jesus Christ.”

Cruelty Toward the Innocent

Witnesses like these were numerous, and it led many people to become Christians. There are many accounts of Roman soldiers and citizens who converted on the spot when seeing the zeal of the martyrs before them. Oftentimes, these Romans were then martyred alongside the Christians, and even came to be venerated as saints themselves.

One of those is St. Aglaius (or Eutychus), one of the forty Martyrs of Sebaste. In the year 320, a group of Christians were left to freeze in the winter air as they were not willing to offer sacrifice to the Roman gods. One of the men apostatized, leaving the group at an uneven thirty-nine. By God’s grace, and by seeing the witness of the other thirty-nine men, devoted to their God, St. Aglaius tossed aside his cloak, proclaimed that he was a Christian, and joined the other martyrs as they sang hymns, awaiting their heavenly reward. For his courage, St. Aglaius, along with the other brave martyrs, are now venerated by the whole Church and commemorated every year on March 10.

From stories such as this, it’s clear why we say that the witness of the martyrs gives life to the Church. It was Tertullian, one of the Early Church Fathers of the second century, who really coined the term “the blood of martyrs is the seed of the Church.” He drives the point home hard in his Apologeticus, directly addressing the Roman Empire:

“We are not a new philosophy but a divine revelation. That’s why you can’t just exterminate us; the more you kill the more we are. The blood of the martyrs is the seed of the church. You praise those who endured pain and death – so long as they aren’t Christians! Your cruelties merely prove our innocence of the crimes you charge against us…

And you frustrate your purpose. Because those who see us die, wonder why we do, for we die like the men you revere, not like slaves or criminals. And when they find out, they join us.”

Blood of Martyrs Regenerates the Church

Tertullian knew full well that the desired effect the Romans wanted to see from the Christian persecution was not happening. The Romans wanted the Christians to be “good citizens” and offer tribute to the false gods. So, by their logic, they figured making an example of Christians by executing them would dissuade others from becoming Christian. But as Tertullian pointed out, the number only increased. The witness of the martyrs made people wonder why the Christians would put their lives on the line, all for not offering a pinch of salt to Zeus. So we can truly say that the blood of those that died for Christ gave birth to even more Christians. For every person the Romans killed, at least two would be converted. This is why Christianity was able to rise so steadily during the first four centuries A.D.

In Christ Our Pascha: Catechism of the Ukrainian Catholic Church (CUCC), this witness is described beautifully, particularly in one of the hymns sung during Vespers for the Feast of All Saints of Rus-Ukraine:

“Copiously bedewed with the blood of many martyrs, the Church in our time reaps the grace-filled fruits of the holiness of her children. Martyrs and confessors are those who, for the sake of the glory of the age to come, sacrificed themselves in this present age. Their contribution to the future of the Church is beyond measure, because it is the gift of one’s entire life, ‘even to death upon the cross.’

“[From the hymn at Vespers:] May the supplications of the ancient righteous ones of the land of Ukraine and the sufferings of our confessors of the holy Gospel rise as fragrant incense before the throne of the Most High; for it is by their sacrifices that the Church of Christ is regenerated and strengthened in the midst of our people” (CUCC 326).

The Church is “regenerated” by the sacrifice of the martyrs. They don’t die for nothing. For one thing, their witness has led to even more Christians walking the earth. Secondly, the intercession of these saints, now reigning in heaven with Christ the King, are able to pray for us. Believe it or not, those prayers are even more powerful than their witness here on earth. Their prayers strengthen and fortify us so that we may have the courage to lay down our lives for God.

Now let’s take note of what the CUCC mentions. Notice how they talk about the martyrs of Ukraine. There were many in the last century under Communist rule. This shows us that martyrdom has not stopped. It is not only limited to the second and third centuries. Nor did it end in the twentieth century. Martyrdoms are still happening today, in the twenty-first century, and the witness of these martyrs should continue to embolden us. Sadly, however, many Christians in the West, specifically us as Catholic Christians, are largely unaware of the suffering that is still being endured by our brothers and sisters.

Probably the most well-known case of present day martyrdom comes from Egypt. In 2015, twenty-one men were martyred for their faith by ISIS. They were beheaded one by one for their faith in Jesus Christ. One of these martyrs, Matthew Ayairga, was not a Christian when he was captured. When asked by his executioners if he rejected Jesus Christ, he was moved by the faith he witnessed from the others and said, “Their God is my God”, accepting Christ there on the spot. Isn’t this the baptism of desire the Catechism of the Catholic Church speaks of? Or at the very least, the baptism of blood the same Catechism tells us about? Surely, Matthew Ayairga should serve as a great example for us as Catholics in keeping an unwavering faith even in the sight of certain death. He also is much like St. Aglaius. He saw the faith of the Christians, he saw their conviction, and he decided to die with them.

The martyrdoms haven’t stopped since then. Despite many areas of Iraq being liberated from ISIS control, many of our brothers and sisters (specifically those in the Chaldean Catholic Church and in the Syriac Catholic Church) have nowhere to live and nowhere to worship. The problem is not only with ISIS. Some areas are still under Muslim control, and Christians to this day are being dragged out of their homes and martyred for their faith. Just because the mainstream media will not report on these things does not mean such events are not happening.

May Their Witness Strengthen Us

The Patriarch of the Syriac Catholic Church, Ignatius Joseph III Yonan, lamented that many Catholics are still scared to return to their homes after so many died at the hands of ISIS. Many are now refugees in Lebanon. Some of these Catholics that have been murdered recently are already having their cause for their sainthood opened. One of those men would be Chaldean Catholic priest Rev. Ragheed Ganni. He was declared a Servant of God earlier this year. In 2007, on the Feast of Pentecost, he was gunned down with three other men outside his parish church in Mosul, just after celebrating Mass.

Martyrdom has always been with the Church, and it always will be, for as our Lord said:

While we may not be persecuted physically for our faith here in North America (at least at the present moment), many of our Catholic brothers and sisters are suffering for their faith. They are dying for the faith just as the early martyrs did in the Roman Empire, as they did in Protestant England in the sixteenth century, and as they did in Communist Russia in the twentieth century. Being a Christian means dying to self, and sometimes, it means dying for our Lord. But through that blood that has been shed, the Church will continue to grow. The witness given by our brothers and sisters that have gone before us strengthens us, and the prayers that they offer to God now in his presence will fortify us for the rest of our sojourn on this earth.

What If We Just Wrote About What We Believed?

15 Things To Do In the Midst of Suffering

Making Sense of Relics and Pilgrimages