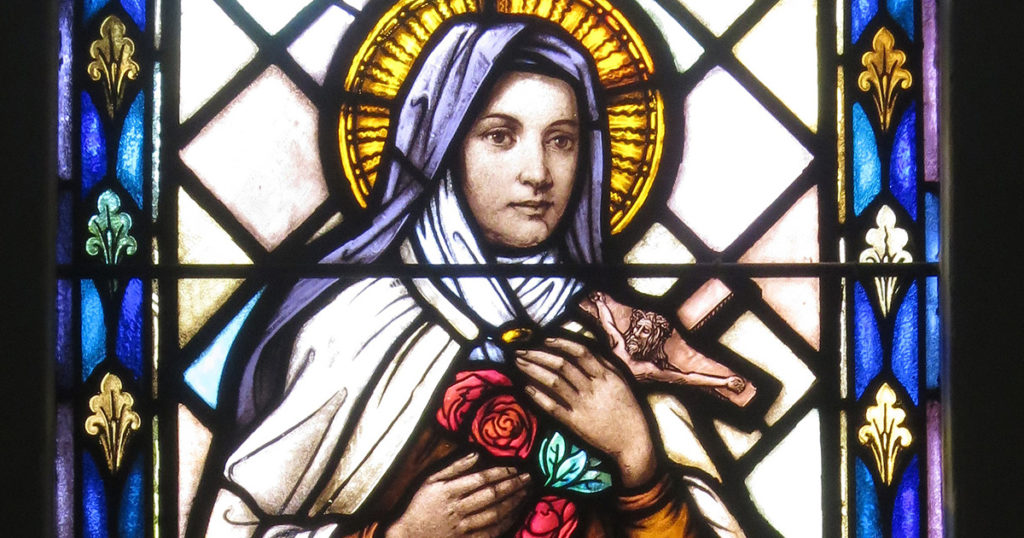 Editor’s Note: The following is a collection of short fragments about St. Thérèse of Lisieux, her Little Way, and her family originally written as Facebook posts during the novena leading up to St. Thérèse’s feast day, September 30.

Her Little Way is such a positive influence on those who are striving for holiness, it’s appropriate to share these words in the days following her feast day and leading up to All Saints Day, as a reminder that sainthood is obtainable for everyone.

When she was fourteen, Thérèse Martin decided to pray for the conversion of a notorious and stubborn murderer she had read about in the newspaper.

She did this for two reasons: first, she believed unquestionably in the agency of prayer, and second, she saw in Pranzini a precious son of the God she called Father. And if they shared a Father, the killer was worthy of her efforts and of mercy.

She was sure that because this man had been made by God, he was loved by God still. She said: ‘My God, I am quite sure that You will pardon him because I have such confidence in Your unbounded mercy.’

There is no crime that could tear away a man’s identity as God’s beloved, no terrible deed that could destroy hope for his salvation.

The Little Way calls us to aim no desire at others—even those who disgust or hurt us—except that they go to heaven.

Like the rest of the world, Léonie Martin read Story of a Soul for the first time after her sister Thérèse’s death.

After a lifetime of struggle as an outsider labeled by teachers and neighbors as “difficult,” after several unsuccessful attempts at entering religious life, after watching all her charming and beautiful sisters transition seemingly effortlessly into their own vocations while she kept failing, Léonie became the very first disciple of her younger sister’s Little Way, illustrating exactly how powerful that way is and who it is truly for: those who battle the great lie of comparison.

We can learn as much from Léonie’s practice of the Little Way as from its original author. It’s not a pretty or precious way, a way strewn with roses and sweetness, but a sharp knife that cuts through the thorns a path to wholeness. The Little Way is not mostly about small acts, but about the enormous—often crushing—task of crossing the chasms of doubt and fear that God’s love is in some way conditional.

Léonie is the first triumph of the Little Way: one who would never “shine,” as she herself said, but one who pierced the darkness with her tenacious hope in God’s love for her. Léonie had nothing to offer Jesus but who she was, and this she did with all her heart. That, in the end, is the one thing necessary! Pray for us, Ven Léonie Martin!

How do you raise a saint? By being a saint yourself: the Little Flower did not materialize from nothing, but grew up and grew holy within a family.

Louis and Zélie Martin are saints in their own rights. Although canonized together as a couple, they are one particular man and one particular woman who each gave a particular yes to God.

This particular woman, Zélie Guérin, endured a childhood devoid of her own mother’s affirmation and warmth. She suffered from this so deeply that she called it “abuse.” She might have protected herself against more pain by becoming bitter, closed, wary, suspicious. She might have become jealous of her brother, whom their mother adored as much as she ignored Zélie. She might have tried to fill the ache with approval and worldly acclaim. She might have chased after emotional satisfaction instead of commitment. She might have allowed her faith in God to fade to just going through the motions.

And who would have blamed her? Many today would have even encouraged her, “You just do you” or “It’s OK to be selfish” or “You gotta make yourself happy.”

But Zélie Guérin had a tenacious heart, and a clear intellect, and a determined will, and she ran after something deeper and more beautiful than defense or comfort.

She prayed, discerned her vocation to the best of her ability, took action to pursue it, and, when doors closed, she refused to believe that God had forgotten or ignored her. She very practically prayed again and kept watch for the door that would open.

Where did Thérèse first learn her famous confidence in love?

From a particular woman who had every excuse to be stifled and frozen, but who resolved first to believe in love and then to choose it.

Sanctity blooms not in some ethereal and elusive place that only a few can find, but in flesh and blood. Thérèse Martin is a woman of fierce clarity: the one thing necessary is love.

When we choose them every day, the straws of little ordinary sacrifices and self-gifts are never trivial. When we choose love instead of self, these straws become a bonfire of refinement that lights up the darkness. She taught us:

“In order that love be fully satisfied, it is necessary that it lower itself to nothingness, and transform that nothingness into living fire!”

Pray for us, St Thérèse!

How St. Thérèse Can Help Lead You to Heaven

Teach Us to Pray

Aimee MacIver is co-author of Power and Grace: A Guide to the Catholic Sacraments, TOB Teens Middle School, and The Parent and Sponsor Guides for Chosen: Your Journey Toward Confirmation. She is a graduate of the Franciscan University of Steubenville and teaches at St. Scholastica Academy. She lives in Covington, Louisiana with her husband Colin and two children, Leo and Zelie.