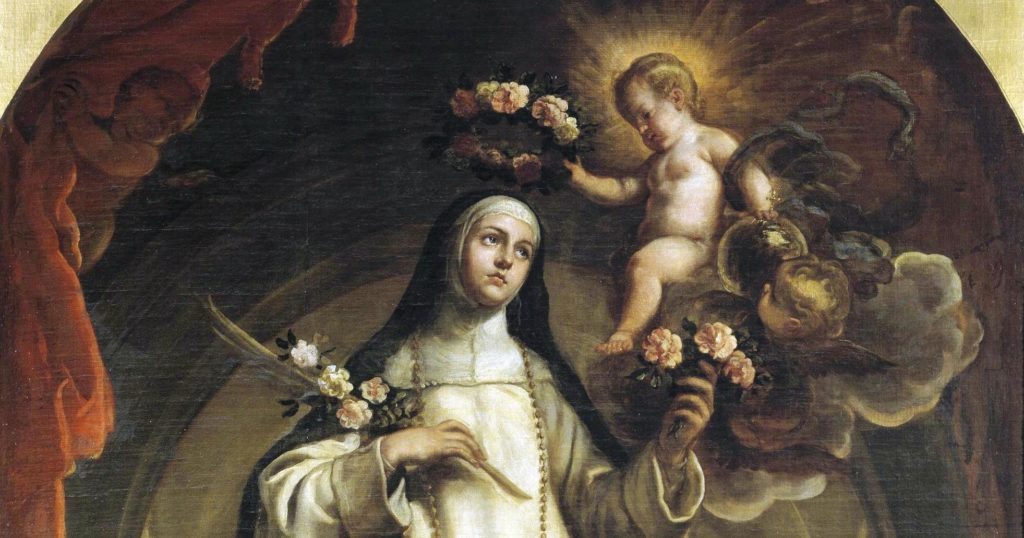 St. Rose of Lima is the first canonized saint to be born in the Americas. Despite holding this honor, her life was really quite simple. Many aspects of her life are encouraging to those of us trying to become saints today. I would like to focus on three of those aspects.

1. How She Grew Her Piety

St. Rose of Lima was born Isabel de Flores y del Olivia in 1586 to Spanish colonial parents. She was nicknamed “Rose” by a servant who had a vision of her face turning into a mystical rose. She was a beautiful child, and the name caught on. Isabel therefore took “Rose” as her confirmation name when St. Turibius de Mogrobejo confirmed her.

Rose was a devout child. She incorporated daily prayer and Communion into her life. She also became intensely interested in the life of St. Catherine of Siena, and took her as a special patron. She had a special love for Dominican spirituality, and Our Lady of the Rosary.

All of these practices—daily prayer, frequent Communion, spiritual reading, and love for Our Lady—are things we can all practice today, and are actually what many of the saints recommend. (The fact that she received permission from her confessor to take a vow of perpetual virginity at the age of five might be harder to imitate.)

After a bad investment, Rose’s family became quite poor. She worked obediently to help their survival, growing flowers to sell during the day, and working on fine embroidery and lace making by night. She still found time for her prayer and Mass attendance in the midst of these personal upheavals.

Despite her hard work, her beauty only increased as she grew older. Rose’s family often encouraged her to vanity. While there’s certainly nothing wrong with appearing well-groomed, her family would go to the extreme of dressing her in finery and trying to push her in front of possible suitors.

Rose refused because she knew that she was called to a life of perpetual virginity. She eventually began to wear thorns under the flower crowns her mother would make her wear, so that she could imitate Jesus. She even cut off all of her hair to discourage vanity and marriage. In fact, there is only one non-related male with whom we know she had a close relationship, which brings me to the second element of life to which I want to call our attention.

Pope Francis reminded the young people of Lima that “Peru is a land of saints” during an apostolic journey in early 2018. This was also true in St. Rose of Lima’s day. I’ve already mentioned that St. Turibius de Mogrobejo confirmed her, but Lima was home to three other saints during Rose’s lifetime. I suppose this isn’t surprising, given the holiness of their archbishop.

St. Turibius was known for studying Native American dialects so he could better communicate with the indigenous members of his flock. He founded hospitals, schools, churches, and the first seminary in the Americas. Despite all this, he was not popular with the elite or the clergy because he criticized the former’s treatment of the indigenous people and the latter’s lack of discipline.

St. Martin de Porres is the non-related male I referenced above. He was the illegitimate son of a Spanish knight and a freed Panamanian slave. The fact that he was mixed race should have made him a pariah, but Rose became friends with him upon his acceptance as a lay Dominican brother when he was fifteen and she was nine. His chapel was the one she attended for daily Mass.

Martin was a mystic, and received the gift of bilocation and aerial flights. He also did many good works, including founding an orphanage and ministering to the African slaves. Rose assisted him with her prayers and penances, and they are now interred together at the Convent of Santo Domingo in Lima. Despite his fame today, St. Martin de Porres only ever held menial offices in his order, much like his good friend John.

St. John Massias was born in Spain to a wealthy family, but was orphaned at a young age. He became a Dominican lay brother in Lima and primarily worked as a doorkeeper. His humble job belied his rich spiritual life. He had a supernatural connection to the Apostle John, who would often visit him and mystically transport him. St. John Massias was also devoted to helping the souls in purgatory.

Finally, St. Francis Solano arrived in Lima in 1601, when Rose was fifteen. He was a Spanish Franciscan priest fleeing his enormous popularity, and was sent to Peru to help protect the indigenous people and recall the conquistadors to their baptismal duties and promises. In short, he was exactly the sort of missionary Archbishop St. Turibius wanted to have around.

These relationships are crucial to understanding Rose because no saint becomes a saint in isolation. Even the most austere hermit had disciples and visitors, and in our age of loneliness, learning how to foster genuine friendships is crucial.

Although I couldn’t find definitive proof that Rose interacted with St. Francis Solano or St. John Massias, they were part of the quintet of future saints working to sanctify a single city. How incredible would it be if future generations looked back at you and your group of friends like these saints? Do you think it’s likely, and if not, what can you do to change that?

Sts. Rose, Turibius, Martin, John, and Francis were united in their mission to bring Christ to their city. The priest and lay brothers lived in the world, following their archbishop’s example of helping the poor and demanding the rich act like the Christians they claimed to be. Rose supported them through her prayers, penances, and the third element of her life I want us to observe.

3. Her Acceptance of God’s Will

When Rose initially rejected her parents’ desire for her to marry, she intended to become a nun. She faced intense persecution from her family and friends because of this. When her parents finally resigned themselves to her choice, she applied to enter the monastery at Santa Clara.

Her brother accompanied her on her way to settle in the monastery. On the way, she stopped in a Church and began to pray in front of Our Lady of the Rosary. She began to pray, and felt herself become as heavy as led. Neither her brother nor the sacristan could lift her. It wasn’t until she promised not to enter the monastery that she was able to move again.

Rose became consecrated to Jesus through the Third Order of St. Dominic, like her patroness, St. Catherine of Siena. Her brother built her a small shack in the family’s yard. She moved into it to live a life of penance and prayer. Her mystical life came to full fruition, and she became mystically espoused to Jesus, again like St. Catherine of Siena. Jesus himself said to her, “Rose of my heart, be my spouse.”

She continued to have frequent dialogues with our Lord. At one point, religious who were jealous of her connection turned her over to the Inquisition, who found her to have attained the highest peaks of holiness.

She also suffered terribly. At first, she pushed the sufferings on herself to better understand the agonies our Lord went through*. Over time, though, the agonies became spiritual, as she entered a fifteen-year dark night of the soul.

Jesus comforted her during this time by saying:

“Let all men know that grace comes after tribulation … that without the burden of afflictions it is impossible to reach the height of grace … that the gifts of grace increase as the struggles increase. Let men take care not to stray or to be deceived. This is the only true ladder to paradise, and without the cross, there is no other way in which to ascend to heaven.”

Every one of her hagiographies I read mentioned her intense inner agony and feelings of abandonment. Her outer life never mirrored her internal upheaval, although it came close when a fleet of Dutch Protestant ships sailed into Lima’s harbor and defeated the Peruvians.

Due to the Reformation, the desecration of Catholic churches seemed imminent. Rose ran to the Dominican chapel she shared with St. Martin and St. John, prepared to die defending the Eucharist. But she didn’t get to die a glorious martyrs death, as the ships left without an attack on the Church.

In fact, her own end was rather anti-climatic: Her health began to fail in her late twenties, so two government employees took her in. She died at the age of thirty-one (or thirty-two—no one seems to agree on this), and her last words were, “Jesus, Jesus, be with me always.”

We don’t get to pick the kind of holy God wants us to be. We are simply allowed whether or not we’ll embrace it, and be pleasantly surprised as we become more fully ourselves. As the Americas continue to struggle spiritually, we can learn from our first saint how to approach such times with holiness.

Saints in Art by Rosa Giorgi and Stefano Zuffi

Saints of the Roman Calendar: Including Feasts Proper to the English-Speaking World by Enzo Lodi

Melissa is a writer, editor, and content strategist based in St. Louis. She has been writing weird things that Catholics seem to like since her freshman year at Benedictine College in Atchison, Kansas, where she graduated with degrees in communications and foreign languages in 2012. Melissa then took her oddball talents to the Fellowship of Catholic University Students (FOCUS), where she helped found the Digital Campus. She has worked on award-winning multi-media stories for the Archdiocese of Denver and contributed to The Catholic Hipster Handbook before moving back home to St. Louis, where she helped parishes start support groups for the bereaved and the divorced and separated.

*Harsh penances like this should always be done under the supervision of a fully trained spiritual director. If done alone, one runs the risk of irreparable physical and/or mental damage, as well as the spiritual damage of thinking one can earn one’s salvation alone.