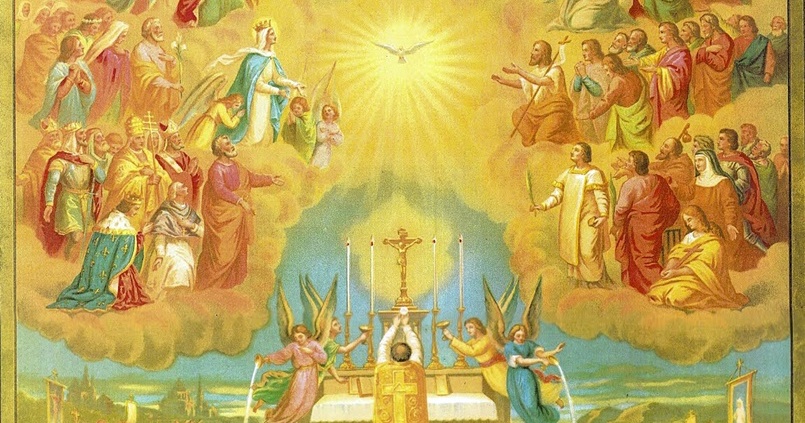 After discussing Mary’s place in Scripture in a previous post, we continue here our series on answering common objections to the Faith. We turn now to the communion of saints.

In our American culture, in contrast to many ancient and traditional cultures, we put a high premium on individualism. There are positives to this aspect of modernity (for example, emphasis on human dignity and human rights); but there are negative ones as well. A lack of solidarity and commitment to the relational bonds of the generational family and neighbor come to mind.

Theologically, this modern individualism can taint how we view what God has done for us. For many Protestant Christians, it’s simply a matter of “me and Jesus.” In reality, however, the biblical view of salvation is covenantal—that is, God creates family bonds. And in the New Covenant, death does not sever this bond. Therefore, the saints are still part of the family bond God created through the New Covenant.

We don’t worship the saints. We honor them as heroes in the Faith who have gone before us (We also honor Abraham Lincoln and Martin Luther King, Jr. for the pivotal role they played in our own country.) The honor given to the saints does not compete with God’s glory—rather, it manifests it. By honoring the saints, we ultimately honor the great work God has done in their lives. We honor God for his natural creation, such as a mountain, ocean, or sunset. Should we not also honor God for his supernatural creation? In honoring the saints, we praise God for making holy people out of fallen human beings like you and I.

Hence, the saints are not dead, but alive. They love us—as we are called to love them, because we are all part of God’s family in Christ Jesus.

What Does the Old Testament Say?

This notion of the communion of saints and their intercessory power has precedent in the time before Jesus. For example, in 2 Maccabees 12, Judas Maccabaeus sees a vision of a certain Onias (who had died earlier) who is praying with outstretched arms for the Jews (2 Maccabees 15:12). Onias, the former high priest, had been murdered (see 2 Maccabees 4:30-38). In Judas’ vision, this Onias speaks further, describing how the prophet Jeremiah (who had died centuries earlier) “prays much for the people and the holy city” (2 Maccabees 12:14).

The Protestants reject 1-2 Maccabees from the canon of Scripture. Despite that fact, these two books indicate what some Jews believed at the time. They give two examples of deceased people interceding in prayer for those still on earth: Onias and Jeremiah. Maccabees was written 100-200 years before Christ. At that time, there was apparently no need to argue for the intercession of the deceased since it wasn’t controversial.

Not Just in Maccabees

There is another passage about intercession in Jeremiah 15. At this point in Jeremiah’s ministry, it had become clear that the people’s hearts had hardened against his preaching, making the coming exile at the hands of Babylon all but inevitable. In this context, God says the following:

“Though Moses and Samuel stood before me, yet my heart would not turn toward this people” (Jeremiah 15:1).

While this text is hypothetical (i.e., even if Moses and Samuel interceded for you, your fate would not change), based on their intercessory power during their earthly ministries (see Exodus 32:11-14; 1 Samuel 7:9), there still does seem to be a sense that they could intercede even now, even though they had been dead for several centuries at this point.

Another relevant passage also comes from Jeremiah, especially since it was understood by later Jewish tradition as a reference to the power of Rachel’s ongoing intercession:

“Rachel is weeping for her children; she refuses to be comforted for her children, because they are not. Thus says the Lord: ‘Keep your voice from weeping, and your eyes from tears; for your work shall be rewarded, says the Lord, and they shall come back from the land of the enemy” (Jeremiah 31:15-16).

If Rachel, Why Not Mary?

Rachel, the matriarch, had died back in Genesis (Genesis 35:16-21), over a thousand years earlier. According to Jewish interpretation, Jeremiah expresses here the fact that Rachel’s sorrowful intercession moves God’s heart and becomes the catalyst for the people’s return from their exile. That is, the long-deceased matriarch appears to be interceding for her people (and this is why Matthew quotes this passage with reference to the Holy Innocents, seeing in Mary is a new sorrowful mother, in Matthew 2:18).

“That is why I can find in Mary a Christian, a Catholic Rachel, whose prayers count when the prayers of great men, fathers of the world, fall to the ground …. No wonder that, when Rachel weeps, God listens. How hard, then, can it be for me to find in Mary that sympathetic, special friend that Catholics have known for 2,000 years! Not so hard at all. So, yes, if Rachel, then why not Mary?” (Brante Pitre, Jesus and the Jewish Roots of Mary, 183).

What Does the New Testament Say?

Immediately after recounting these heroic examples of faith and martyrdom, the author writes:

“Therefore, since we are surrounded by so great a cloud of witnesses, let us also lay aside every weight, and sin which clings so closely, and let us run with perseverance the race that is set before us” (Hebrews 12:1).

The word for “witness” here in Greek is martus (i.e., “martyr”); in other words, the author is here saying that the martyrs—in this case the Old Testament saints who have gone before us—surround us since we are in the New Covenant. It’s as if we’re playing a home game: the saints surround us and cheer us on—because they are invested in God’s continued work on earth.

“You have come to Mount Zion and the to the city of the living God, the heavenly Jerusalem, and to innumerable angels in festal gathering, and to the assembly of the first-born who are enrolled in heaven, and to a judge who is God of all, and to the spirits of just men made perfect, and to Jesus, the mediator of a new covenant” (Hebrews 12:22-24).

Notice that the New Covenant family of God—the Church—encompasses angels and spirits of just men made perfect (i.e., the saints who have gone before us). Death does not sever our bonds in the New Covenant.

The reference here to “spirits of just men made perfect” points initially back to the Old Testament heroes of Hebrews 11, as can be seen by comparison to the end of Hebrews 11:

“And all these, though well attested by their faith, did not receive what was promised, since God had foreseen something better for us, that apart from us they should not be made perfect” (Hebrews 11:39-40).

These Old Testament saints have been perfected in Christ—that’s why they’re now called “spirits of just men made perfect” (Hebrews 12:23). They are now part of the New Covenant family of God, a family united in Christ—that same family which death does not sever.

The Saints’ Concern for Earth

One objection against the Catholic doctrine of the communion of saints is the suggestion that the saints in heaven are so focused on God that they are oblivious to what’s going on here on earth. But as is apparent here in Hebrews, this is not how the New Testament describes the interaction between the saints of heaven and the wayfarers on earth. For example, in the parable of the Lost Sheep, Jesus speaks of the radical joy in heaven over one sinner that repents (Luke 15:7).

Furthermore, in the parable of the Lost Coin, Jesus speaks of the joy of angels over one sinner turning back to God:

“Just so, I tell you there is joy before the angels of God over one sinner who repents” (Luke 15:10).

Indeed, the eyes of heaven look attentively upon the happenings of earth with eager love and concern.

Prayers of the Saints

Further, when John sees the vision of the heavenly liturgy, he describes the “prayers of the saints” (Revelation 5:8; 8:3).

In Revelation 6:9-10, the heavenly scene becomes clear—the martyrs are interceding vigorously on behalf of the Church on earth:

“I saw under the altar the souls of those who had been slain for the word of God and for the witness they had borne; they cried out with a loud voice, ‘O Sovereign Lord, holy and true, how long before you will judge and avenge our blood on those who dwell upon the earth?” (Revelation 6:9-10).

In this passage, clearly these “souls” are dead—since they are martyrs; and they are clearly pleading and interceding for their brothers and sisters on earth.

Getting Closer to Jesus

This communion of saints—this union of all those who are in Christ, in heaven and on earth—was tangibly felt by the early Church. The following is an example from the Martyrdom of Polycarp, a manuscript of the Church Fathers on the bishop of Smyrna who died around A.D. 155:

“We worship [Christ] as the Son of God but we appropriately love the martyrs as disciples and imitators of the Lord on account of their unsurpassable affection for their king and teacher. May we become fellow partakers and disciples” (chapter 17).

In the Old Covenant, the earthly imitates the heavenly—for example, the earthly Tabernacle and Temple liturgy imitate their heavenly counterparts (see Exodus 25:9, 40). In the New Covenant, the Church participates in the heavenly reality now (see Hebrews 12:22-24; Revelation 1:10; 4:1-5:14; 19:7). In and through Jesus’ Risen Body, he has united heaven and earth (see Revelation 21:22).

How can we better appreciate the full reality of salvation in the family of God that Christ has so graciously died to give us?

Mary and the Saints, Our Powerful Intercessors

Can Souls in Purgatory Pray for Us?

The Importance of Christian Community

Keep an eye out for Dr. Swafford’s latest project with Ascension, a new Romans study which will arrive in the summer of 2019.