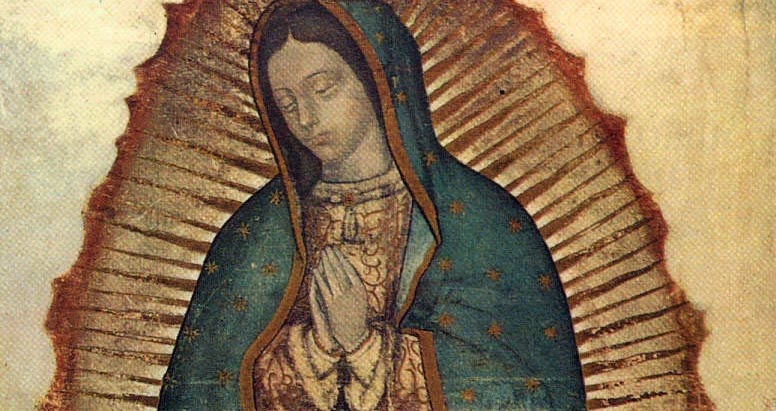 On this feast day of Our Lady of Guadalupe, like many Hispanic Catholics, I am especially proud to celebrate my cultural heritage and its special place in our faith history! Here in Santa Fe, New Mexico, where I am an eighteenth-generation native, batches of the bizcochitos and empanaditas we are perfecting for Christmas come out of the oven early, friends gather around, and little gifts are presented to children that remind them of the extraordinary happenings in 1531 that are still manifest today.

The Tilma of Guadalupe

We re-tell the story of how the Franciscan bishop of Mexico City, troubled over the mistreatment of native peoples by Spanish political powers, prayed for a sign—a rose of his native Castille in winter. The faithful visionary St. Juan Diego, an Aztec Catholic, delivered to him a message from Our Lady along with those roses, hidden in his roughly woven tilma, or cape. When he unfurled the cape, the image of Our Lady—the only icon painted by the hand of heaven, we might say—was impressed there as perfectly and impossibly as it remains now.

It is a fine, detailed image on cactus-fiber fabric, with no means of holding pigment, which should have biologically degraded centuries ago. It maintains a human body temperature of 98.6 degrees. It heals where it is cut and stood unharmed in the blast zone of a bomb planted during the persecutions preceding the Cristero war. It depicts Our Lady, pregnant in the days just before Christmas, bringing Christ’s presence with her to a new continent, with the stars on her mantle showing precisely their arrangement in the Mexican skies at the time of her apparition.

“Am I not here, who am your mother?” Our Lady spoke assuringly to Juan Diego, and through him, to all of us who would bear the Catholic Faith in the Americas. How powerfully she has been our mother indeed, and what loyal children she has preserved. This year, her feast day reminds me to reflect on the faith of the people she came to comfort and strengthen in their Catholic Faith.

There is a narrative that exists today which, if we are not careful, can eclipse the inspiring heroism of such faithful Catholics—a narrative that says that Christianity in the New World was always and everywhere an imposition on the native population. Certainly, wherever fallen humanity clashes politically and culturally, great tragedies are bound to occur. The European conquests of the Americas were no exception.

Here in Santa Fe, however, we are faced with a visible reminder of a different facet of Catholic history. We see evidence that many souls were grateful to be liberated from the demands of Mezoamerican religious practices. The most onerous reality of these was the astonishing degree and regularity of human sacrifice.

On the way to the downtown Plaza in Santa Fe, a visitor will pass the oldest church in the United States in which Mass has been continually celebrated.  (Florida claims an older Church building, but it has not remained in continual use.) It’s called San Miguel Mission, and it was built by a forgotten but influential group of people—the Tlaxcalans of central Mexico.

The Story of the Tlaxcalans

The Tlaxcalans were a sophisticated, if small, cultural group who spoke Nahuatl, the same language in which Our Lady of Guadalupe addressed Juan Diego. They lived on the edges of the Aztec Empire. They were extremely gifted warriors for a singular reason.

The Aztec religious aristocracy, being practical, wasn’t interested in depleting its own population for the purpose of human sacrifice, if this could be avoided. So, they sent their military might to hunt others. Their nearest neighbors were hounded.

When the Spanish arrived, the first local people who came to embrace a Catholic missionary presence were the Tlaxcalans. Sometimes I try to meditate on what the gospel would have sounded like to Tlaxcalan ears. I wish I could experience the same joy and relief and profound, visceral understanding that must have pervaded the souls of those weary warriors.

For the first time, they heard that not only was the serpent-god—who demanded to drink the blood of their still-beating hearts—not the True God, but that the True God loved them so enormously that he gave his own Body and Blood to them. His Sacred Heart was laid open for them, rather than their hearts for a cruel and false god. In short order, the Tlaxcalans became the first native Catholics in Mexico.

It was the Tlaxcalans’ Catholic faith that made them quick allies with their Spanish in military matters. The Tlaxcalans could teach the Spanish the fighting strategies of their Aztec enemies, and the Spanish could equip the Tlaxcalans with horses and steel. It can be argued that the fall of the Aztec Empire depended on this alliance.

The Spanish themselves attributed so much of this victory to the Tlaxcalans that they were made hidalgos under Spanish law—a title of nobility that most Spanish officers would never themselves attain. After the war with the Aztecs, as new compatriots and brothers in Christ, the Spanish and Tlaxcalans ventured further north together.

By 1610, they stopped in the place they named Santa Fe, or Holy Faith. A previously abandoned pueblo settlement near a river and between mountains, the geography was reminiscent of the Santa Fe outside of Granada—the site of the final Christian victory against the Islamic rulers of Spain. Victorious warriors themselves, the Tlaxcalans believed that God had rewarded them with a home far from the dangers they once faced.

Before beginning to build even their own permanent houses, the Tlaxcalans started an ambitious project. They wished their first act to be the construction of a church dedicated to St. Michael. They took St. Michael as their special patron because they believed that with the help of the archangel who had cast down the serpent, they had defeated the serpent-like false god of the Aztecs in its reign of terror over their lives.

San Miguel Mission became ground zero of the Pueblo Revolt of 1680—a rebellion led by local native religious leaders against the foreign Catholic presence of the Spanish and Tlaxcalans in New Mexico. The first arrows of the conflict were fired onto the roof of the mission. While the adobe walls held firm, the wooden roof gave way to flames.

Trapped inside and barred from escape were those who had gathered to pray. These included innocent Tlaxcalan and Spanish families who held to their faith amidst violence and died among the first martyrs on the soil of this country. These were true sons and daughters of Our Lady of Guadalupe. It would be from the seeds of faith like theirs that Catholics of a future generation would march under the banner of Our Lady of Guadalupe in the Cristero War.

It is striking how this story is repeated in many times and cultures. As we return our thoughts to our Advent preparations, we are reminded how even that warm and innocuous tradition of the Christmas tree takes up the theme. The life of St. Boniface includes a legendary account of how he felled Thor’s Oak amidst a pagan crowd on the verge of a child sacrifice. Like the miraculous appearance of Our Lady of Guadalupe, this was said to happen at this very time of year, as the winter solstice approached, and as Catholics prepared for the birth of the Son.

With a mighty swing of his axe, St. Boniface proved to the crowd that the child sacrifice was unnecessary and that the pagan god was false. He saved the child and a people. (The delighted crowd took up the tradition of felling trees and bringing them into their homes to celebrate that no false god lived in them to take vengeance!) Similarly, he was later martyred with many of the followers he converted, thus planting the seeds of great faith among a once-pagan people who would become staunch defenders of Catholic truth in future generations.

Our Ladyof Guadalupe, Pray for Us

It is interesting in this context to meditate on Our Lady of Guadalupe under the especially apt, even prophetic, titles given her by Pope St. John Paul II—Empress of the Americas and Protectoress of the Unborn. The scale of human sacrifice that existed in the Americas prior to the arrival of the Spanish was unparalleled elsewhere in its time. It made the sacrifice that Boniface prevented, at least in numerical terms, seem almost mild.

Today, however, our need to invoke Our Lady’s protection against the sacrifice of innocents exists on a scale more stunning than even the ancient Mezoamericans could have envisioned. In this season of Advent, when we await the birth of the Christ Child, may we ask her intercession especially for those most vulnerable little ones in the womb.

Our Lady of Guadalupe, pray for us.

A Guide to 5 Key Marian Apparitions (#3 Is Hardly Known)

Our Lady of Guadalupe image sourced from Wikimedia Commons