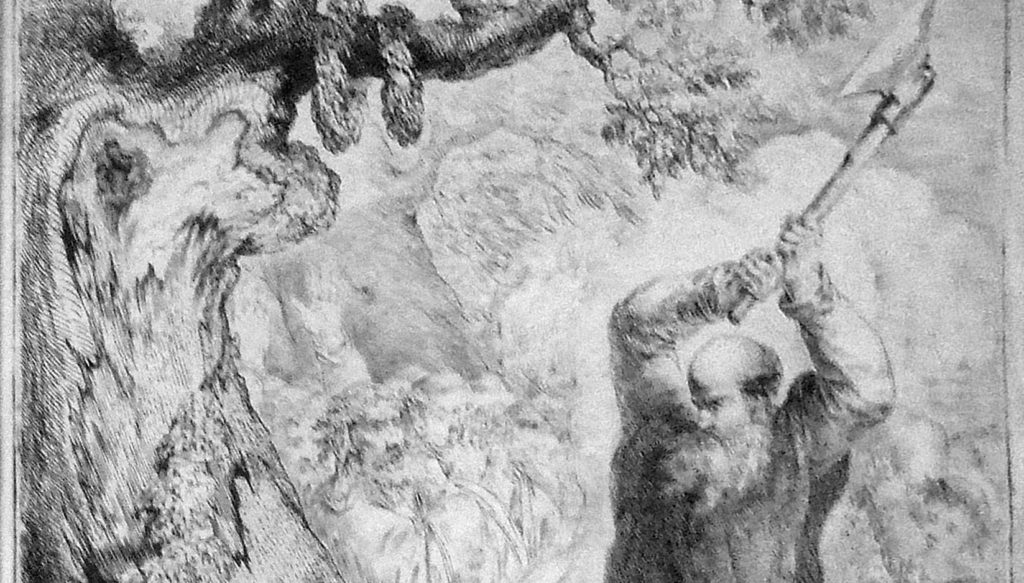 A missionary and spiritual father to Germany, whose feast we celebrate today, may shed light upon a few things that were once well understood, but we now for the most part take for granted.

St. Boniface, martyr and patron saint of Germania, traveled from England to Frisia and Bavaria, or modern day Germany, in the seventh century to evangelize the mostly pagan tribes there, and organize the region’s scattered community of Christians. The paganism practiced by the locals was known for worshiping Thor, the “God of Thunder”. However, this wasn’t the Thor we know who fights galactic villains in comic books and on silver screens. This Thor demanded human sacrifice.

In a winter ritual that took place under the “Thunder Oak” tree that the pagans dedicated to this “God of Thunder”, the pagans would often sacrifice a child.

During one such ritual in the winter of 722, St. Boniface came to the site of the sacrifice with a gospel message that shocked the pagans. He chopped down the great oak tree with an axe before they could make their sacrifice. This in itself surprised them because, being so closely associated with a deity, they believed the tree could not be chopped down and even boasted that Boniface’s God could not destroy the tree of Thor.

After the great oak tree fell, St. Boniface replaced it with a small fir tree and told the pagans about the child Jesus. Many people today have good reasons to believe these words of his, referring to this young fir, are the origins of the Christmas tree tradition:

“This little tree, a young child of the forest, shall be your holy tree tonight. It is the wood of peace… It is the sign of an endless life, for its leaves are ever green. See how it points upward to heaven. Let this be called the tree of the Christ-child; gather about it, not in the wild wood, but in your own homes; there it will shelter no deeds of blood, but loving gifts and rites of kindness.”[1]

My knowledge of Thor is limited to the movies and what I learned about mythology in middle school. I know he is a son of Odin, that he is literally The Man Who Was Thursday (since the weekday was actually named after him), and that his weapon of choice is a hammer only he can wield, and that’s all I know.

But even this elementary knowledge of Thor is enough to appreciate the way St. Boniface evangelized these pagans who worshiped the “God of Thunder”. St. Boniface came to Germania with a mission to spread the gospel of Jesus Christ in a pagan society, and he appealed to them through a demonstration of physical strength that contested that of a god. The story about St. Boniface and the Thunder Oak testifies so powerfully to the absolute superiority God gave to the saints over belief in pagan gods. God would let nothing stop these saints in their mission to lead the tribes of Europe to the truth of Christianity. Sure, we can look back today and say that it was probably just an overgrown oak tree, but suspend your empirical mind for a moment and imagine what this act meant to these Germanic people to see that tree fall.

There are many stories like this from Medieval Europe, but few are such a potent symbol for the uprooting of paganism and the establishment of a Christian society in Germany, and the fact that it is connected to Christmas is so fitting. Christmas has been an iconic celebration in Northern Europe since Christianity first came to the region, since the region was already rich in history, traditions, customs, and mythology. Furthermore, the region’s enchanted forests and vibrant age-old folk culture made it ripe to receive the gospel, and these features continues to make Northern Europe the ideal backdrop for such a holy day as Christmas. And yet, in the midst of all the celebrations associated with the holiday, St. Boniface gets little if any attention despite his contribution to the way Christ’s birth is commemorated today.

It’s About More than Christmas

At this point you may be wondering why I am giving so much attention to a holiday that’s six months away. After all, it is June and we should be talking about our beach plans and summer vacations. Well, aside from giving St. Boniface the recognition he deserves, I think this patron of Germany is more relevant today than a Christmas tree story can explain. Just a few days ago, Pope Francis honored St. Boniface’s legacy in an indirect way when he upheld transubstantiation in Germany.

The Vatican recently rejected a proposal from the German bishops to offer Communion to Protestants who are married to Catholics. The logic of the German bishops is that by not offering Communion to these Protestant spouses of Catholics, the Church is working against any efforts to achieve full communion with them. Whether or not the Protestant spouse believes that the Eucharist is the Body and Blood of Jesus seems to be at most an afterthought for them.

In blocking the German bishops’ adverse attempt at ecumenism, Pope Francis and the Vatican acted as the barque of Peter that stood against the pounding waves that would try to sink it. In St. Boniface’s’ time, those waves would have been the paganism of the Germanic tribes. Today, the waves are more like a syncretism that reveres other religions like so many pagan gods. St. Boniface would be proud. With this proclamation blocking intercommunion, perhaps the German bishops will take heed, embrace the fullness of the Faith, and remember their country’s patron saint, who said:

“Let us preach the whole of God’s plan to the powerful and to the humble, to rich and to poor, to men of every rank and age, as far as God gives us the strength, in season and out of season.”[2]

This is the stalwart, unmoving faith that makes the saints heroic, and it is the type of heroism our culture needs. Imagine a scene on the silver screen where Marvel’s Thor looks on as St. Boniface chops down the tree dedicated to the pagan god. The way Marvel depicts Thor in movies today, he is an admirable, virtuous character; but it’s interesting to see our Christian history clash with this pagan mythology today. We watch movies with an intrinsic desire to experience something heroic. If only popular culture would more openly embrace the stories of the saints, I think we would find much more complete and real examples of heroism, like St. Boniface.

For more on this saint, read Steve Weidenkopf’s article, St. Boniface and the Christmas Tree.

A Quick Primer on Transubstantiation