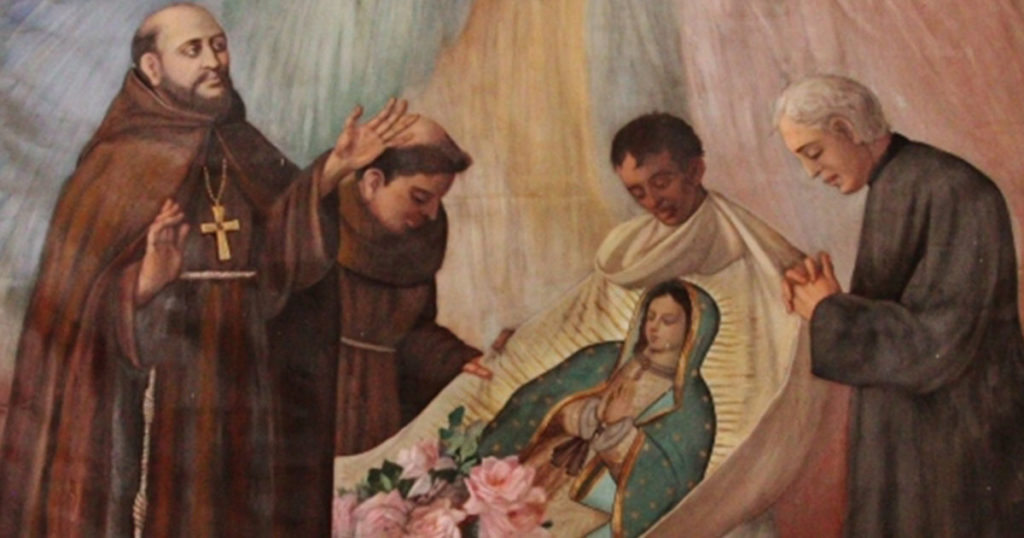 Every weekend, Juan Diego walked nine miles to the nearest church to attend Mass and learn more about his faith. He lived during the Aztec Empire, which practiced human sacrifice to keep the gods happy. When the Spanish arrived, they brought missionaries to convert the people to Christianity but had limited success.

However, Juan and his wife were baptized into the Catholic Faith. They were one of the first Catholic married couples in the New World.

On one of those journeys, December 9, 1531, an apparition of the Virgin Mary appeared to Juan Diego. His devotion to her and her request led to his canonization in 2002 and the conversion of countless people. As Juan Diego travelled near Tepeyac Hill, he heard an unusually beautiful birdsong. As he reached the top of the hill, a voice called his name and he saw before him a beautiful woman shining like the sun. She told him she was Mary, the mother of the true God as well as his own compassionate mother. She asked him to deliver a message to Friar Juan de Zumarraga requesting the construction of a temple on Tepeyac Hill.

The Virgin’s request for a temple was meaningful. As Carl Anderson and Msgr. Eduardo Cavez Sanchez say in their book, Our Lady of Guadalupe: Mother of the Civilization of Love:

“So central was religion to indigenous culture that the temple was seen as the foundation of society. Historically, the construction of a new temple marked the inauguration of a new civilization” (Anderson, Sanchez 9).

Juan Diego took the request to the friar, but the friar was skeptical and sent him away. Friar Zumarraga was working hard to combat the idolatry of the time and was reluctant to believe the humble Juan Diego.

When he returned to Tepeyac Hill and saw Mary for the second time, he begged her to find someone more respected and important to give the message to the Friar. he said:

She replied that she wanted him to relay the message and ordered him to return.

At the second meeting, Friar Zumarraga asked for proof that Juan Diego is in fact carrying a message from the Virgin Mary.  Juan Diego left, confident he could get the evidence needed. When he returned home he found his uncle was very sick and in need of a priest for his final confession. On December 12, Juan Diego set out, wrapped in a tilma to keep warm, and as he passed Tepeyac Hill, he remembered he had to go see the Virgin Mary again. He took a different path, hoping to avoid her but she appeared anyway. He explained that his uncle was dying and promised to return after he found a priest.

The Plain Tilma of Peasants

Mary comforted him and reminded him of her love.  She told him not worry about his uncle’s illness. She directed him to the top of the hill where he would find flowers to take to the friar as proof. Despite the cold winter weather and the rocky ground, he found the flowers. He gathered them and brought them to Mary who arranged them in his tilma. In his culture, flowers were a symbol of truth.

He returned to the friar but the servants would not let him in. Curious, they asked what he held in his tilma and when he showed them, the flowers suddenly appeared as if someone painted them onto the tilma. The servants then let him in and when he opened the tilma to show the friar, the flowers spilled out and revealed an image of the Virgin Mary on the fabric. The Friar realized that this was truly a message from God.

It was through Juan Diego’s tilma that Mary gave “a new and elevated dignity to the common person and especially the Indian” (Anderson, Sanchez 19). In that time, only those who were wealthy and noble had decorated tilmas. The peasants wore plain ones.

While Mary was giving the flowers to Juan Diego, she was also visiting his uncle. She healed him from his illness and told him to call her “Holy Mary of Guadalupe.”

On December 26, less than a month after the first apparition, the locals finished building the temple on Tepeyac Hill. Many people, after seeing the tilma in the temple, requested baptism. Often they came from places missionaries had not yet visited.

The tilma has remained intact for 487 years despite nitric acid being spilled on it in 1785 and a bomb exploding near it in 1921. For the first 116 years, the tilma was displayed without any protection, exposed to the saltpeter in the air, humidity, dust, incense smoke and pilgrims touching and kissing it.

In March of 1666, experts received permission to study the tilma. They could not explain how such a detailed image could be painted on such a rough surface. They determined only God could do this. Later that month, a group of chemists studied the tilma and could not explain how it survived the humidity and the airborne saltpeter. They also noted that the image itself was soft to the touch yet the material was rough and coarse. In the late 1700s, pilgrims made several replica tilmas and placed them near the original. It wasn’t long before they became discolored and fell apart.

As technology developed, experts performed more studies. In 1956, someone took a photograph of the Virgin’s eyes and revealed that the image’s “coloration not only depicts her pupils but also depicts the types of images one would see reflected in the eyes of a living human being – in this case, the reflected images of people” (Anderson, Sanchez 30).

“Even as science has advanced … it has become increasingly clear that there is no natural explanation for the phenomenon of the image of Our Lady of Guadalupe on Juan Diego’s tilma” (Anderson, Sanchez 30).

The One True Son

In addition to the tilma’s extraordinary physical qualities is the message embedded in the image itself that would be meaningful to the Aztecs. The blue green cape with stars represents heaven and the flowered dress represents earth. Together they represent the universe. An angel under the moon has eagle wings, not dove wings as is common to European depictions of angels. The eagle was a sacred bird to the Aztecs. Juan Diego’s birth name translates to Talking Eagle.

The angel is holding the cape (heaven) in his right hand and the dress (earth) in his left which tells the Aztecs that the one true son has united heaven and earth, bringing them in harmony.  The black ribbon above her stomach indicated Mary was pregnant, but her hair is worn straight as was customary for virgins in the Aztec culture—reaffirming the virgin birth of Christ.

Scholars have recently discovered the importance of the flowers. The flowers are symbols or glyphs in the Nahuatl language of the Aztecs. The four petaled jasmine represents the fifth sun god to the Aztecs. On the tilma it is just below Mary’s black pregnancy band indicating that her son, Jesus Christ, is the one true Son.

Additionally, “the flower symbols or glyphs do not follow the folds of the Virgin’s tunic, as it would if the pattern were merely a design on the tunic, but rather the floral glyphs overlie the tunic area, leaving the glyph lines undistorted and entirely visible” (Anderson, Sanchez 46).

We learn from St. Juan Diego that Mary is a loving mother and her desire to bring us closer to her Son Jesus is great. We can imitate his trust. Mary brought beauty to a plain tilma and flowers from a desolate countryside. With the help of a simple peasant, many converted to the Catholic Faith. Juan Diego’s obedience and trust changed the world.

A Guide to 5 Key Marian Apparitions (Hardly Anyone Knows #3)

The Annunciation: ‘Greatest Event in Our History’

Merridith Frediani’s perfect day includes prayer, writing, unrushed morning coffee, reading, tending to dahlias, and playing Sheepshead with her husband and three teenagers.  She loves leading small faith groups for moms and looking for God in the silly and ordinary. She blogs and writes for her local Catholic Herald in Milwaukee.