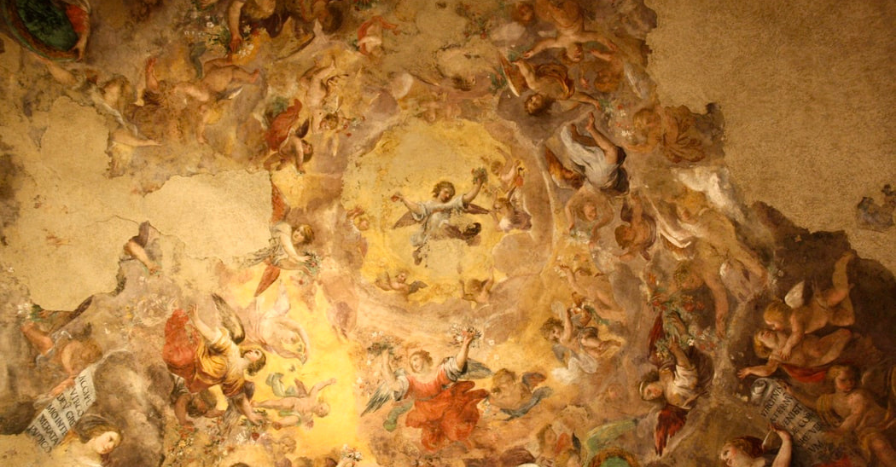 “For he will command his angels concerning you to guard you in all your ways.” – Psalm 91:11

Angels are a fundamental part of our Catholic Faith. While they are often depicted in fantasy and fiction, angels are just as real as Jesus himself. They have been created by God, and they enjoy beholding his face in heaven.

As the Catechism of the Catholic Church (CCC) states,

With their whole beings the angels are servants and messengers of God. Because they “always behold the face of my Father who is in heaven” they are the ‘”mighty ones who do his word, hearkening to the voice of his word.” As purely spiritual creatures angels have intelligence and will: they are personal and immortal creatures, surpassing in perfection all visible creatures, as the splendor of their glory bears witness.

Angels hold an important role in serving God as his messengers—and as our protectors. Since we are made in God’s image and enjoy a unique and irreplaceable position as his sons and daughters, angels help us journey toward salvation.

In the Catechism, we are told the following about the guardian angels:

From its beginning until death, human life is surrounded by their [angels] watchful care and intercession. “Beside each believer stands an angel as protector and shepherd leading him to life.” Already here on earth the Christian life shares by faith in the blessed company of angels and men united in God.

So the Church affirms the presence of a unique angel assigned to keep each of us safe. A common prayer parents can say at the bedside of their children before they go to sleep is: “Angel of God, my guardian dear, to whom God’s love commits me here.Ever this day, be at my side, to light and guard, to rule and guide. Amen.”

As a child, I went through a phase of affirming the presence of an “imaginary friend” who followed me everywhere, even demanding a seat at the dinner table and space next to me at Mass. But our guardian angels are not imaginary; God gives one to each of us.

Besides our guardian angels, the Scriptures confirm by name the existence of three archangels sent from God to aid in helping humanity—St. Michael, St. Gabriel, and St. Raphael.

St. Michael is God’s warrior. His name in Hebrew means “who is like God?” This is not mainly a statement about Michael being “like God” but a response to the angel Lucifer, who desired to be “like God.” In defense of God’s honor, Michael battles Lucifer and his followers. This battle is depicted in the book of Revelation 12:7-9:

Unlike Lucifer, who desires to be more than he was made to be, St. Michael understands his place in God’s kingdom and his role in serving the one who created him. He is a protector of truth and justice—and of each of us as God’s children. While Lucifer desires power and prestige,Michael desires obedience and honor of all things good and holy. He is a strong example for us in remembering that each of us has been created by God for a purpose—and that we should use the gifts he has given us for the good of others.

St. Michael is also mentioned twice in the book of Daniel. In Daniel 10:13, we read, “But the prince of the Persian kingdom resisted me for twenty-one days. Then Michael, one of the chief princes, came to help me, because I was detained there with the king of Persia.” Later, Daniel 12:1 tells us, “At that time Michael, the great prince who protects your people, will arise. There will be a time of distress such as has not happened from the beginning of nations until then. But at that time your people-everyone whose name is found written in the book-will be delivered.”

Michael is also mentioned in Jude 5:9, in a dispute with Satan over the boy of Moses: “But even the archangelMichael,when he was disputing with the devil about the body of Moses,did not himself dare to condemn him [the devil] for slander but said, ‘The Lord rebuke you!’Yet these people slander whatever they do not understand.”

St. Michael is the prince of the angels. He protects God’s people from the wickedness of their enemies, including the devil. The following prayer is often invoked for St. Michael’s protection:

Saint Michael the Archangel, defend us in battle. Be our protection against the wickedness and snares of the devil. May God rebuke him we humbly pray; and do thou, O Prince of the heavenly host, by the power of God, cast into hell Satan and all the evil spirits, who prowl through the world seeking the ruin of souls.

The second archangel named in the Bible is Gabriel, who appears both to Zechariah and Mary, foretelling the births of their sons, John the Baptist and Jesus, respectively. In the Gospel of Luke, Gabriel appears to Zechariah, a man on duty with his division of priests at the temple.

The angel said to him, “Don’t be afraid, Zechariah! God has heard your prayer. Your wife Elizabeth will have a son, and you will name him John. He will be your pride and joy, and many people will be glad that he was born. As far as the Lord is concerned, he will be a great man. He will never drink wine or any other liquor. He will be filled with the Holy Spirit even before he is born. He will bring many people in Israel back to the Lord their God. He will go ahead of the Lord with the spirit and power that Elijah had. He will change parents’ attitudes toward their children. He will change disobedient people so that they will accept the wisdom of those who have God’s approval. In this way he will prepare the people for their Lord.”

Gabriel speaks with clarity and specifics regarding the sort of man John will grow up to be, how he will proclaim the coming of our Savior. He takes God’s intentions and makes them known to man as his messenger. Also in Luke, we see Gabriel appearing again, this time to Mary.

During Elizabeth’s sixth month of pregnancy, God sent the angel Gabriel to Nazareth, a town in Galilee, to a virgin. She was engaged to marry a man named Joseph from the family of David. Her name was Mary. The angel came to her and said, “Greetings! The Lord has blessed you and is with you.”

In connection with the above story, St. Gabriel again serves as God’s messenger and appears to Mary, to explain to her how God’s plans will be revealed through her faith. She accepts God’s plan without hesitation, as the passage reads:

But Mary was very startled by what the angel said and wondered what this greeting might mean. The angel said to her, “Don’t be afraid, Mary; God has shown you his grace. Listen! You will become pregnant and give birth to a son, and you will name him Jesus. He will be great and will be called the Son of the Most High. The Lord God will give him the throne of King David, his ancestor. He will rule over the people of Jacob forever, and his kingdom will never end.”

St. Gabriel instructs both Zechariah and Mary not to be afraid, as he is God’s messenger and is there to bring them good news, not bad.

The third angel named in Scripture is St. Raphael, in book of Tobit.

Tobit and his son Tobias are traveling the road to a foreign city when they encounter who they think to be another traveler who helps direct them. On the journey, this traveler cures Tobit’s blindness and casts demons out of a woman named Sarah, whom Tobias is planning to marry. It is not until the traveler reveals his true identity that the two men come to see who he truly is:

Now I will reveal to you the full truth and keep nothing back [says Raphael]… God sent me to cure you and to rescue your daughter-in-law, Sarah, from her troubles. I am Raphael, one of the seven angels who stand in the glorious presence of the Lord, ready to serve him. Tobit and Tobias were terrified and fell to the ground, trembling with fear. But Raphael said to them, Don’t be afraid; everything is all right. Always remember to praise God. He wanted me to come and help you; I did not come on my own. So sing God’s praises as long as you live. When you thought you saw me eating, I did not really eat anything; it only seemed so. While you are on this earth, you must praise the Lord God and give him thanks. Now I must go back to him who sent me. Write down everything that has happened to you. Then Raphael disappeared into the sky. Tobit and Tobias stood up, but they could no longer see him. They began to sing hymns of praise, giving thanks for all the mighty deeds God had done while his angel Raphael had been with them.

Continuing the trend that Michael and Gabriel began, Raphael tells those he meets not to be afraid. He speaks of God’s praises and how he was sent to them. He also shares that angels have no need to eat, affirming that they are spiritual beings who have no need of sustenance. We also come to know that there are specifically seven angels who stand before the throne of God, but only these three are given a name and place in Scripture.

We should give thanks for the angels God has sent for us. We should not hesitate to call to mind our own guardian angel whom God has commanded to aid us in safe passage through this life, so we may enter into the life to come. It is through the mercy and power of God that we are blessed by these heavenly companions, who are working wonders in our lives even now.

St. Michael, St. Gabriel, St. Raphael, and all our guardian angels, pray for us!

All About Guardian Angels [CFR video]

What Angels Really Are and What They Did in Loreto