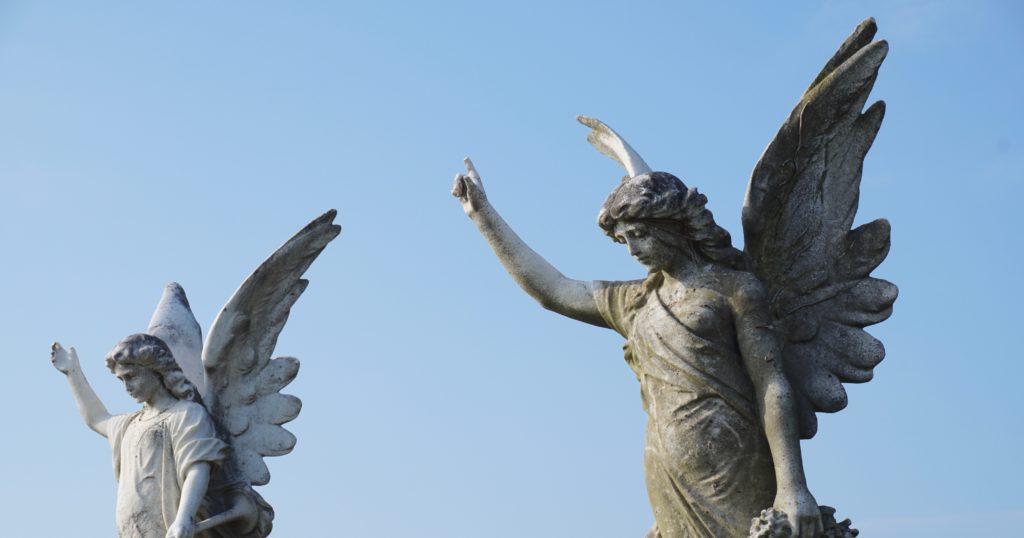 When I was little I imagined my grandfather was my guardian angel. He died several months before I was born and it was comforting to think he was up in heaven taking care of me. I know now we do not become angels when we die but my grandpa is probably watching over me anyway.

As an adult I had what I consider my own angelic encounter one morning. While walking I was engrossed in a phone conversation and had stopped paying attention until a car sped just a few feet in front of me. I realized I was standing in an intersection and I had quite possibly crossed against a red light. I was shook up when I realized how stupid and how close to being injured or killed I’d been. Sure, I could chalk it up to sheer dumb luck but I believe my guardian angel was at work.

In the Bible there are plenty of references to angels in both the Old and New Testament.  An angel prevented Abraham from killing Isaac (Genesis 22:12), announced God’s plan to Mary to bear his son (Luke 1:26-38), and broke Peter out of jail in Acts. 12:6-19.

There is also mention of angels in the Catechism of the Catholic Church:

“The existence of the spiritual, non-corporeal beings that Sacred Scripture usually calls ‘angels’ is a truth of faith. The witness of Scripture is as clear as the unanimity of Tradition” (CCC 328).

Paragraph 329 of the Catechism states:

Angels have intelligence and will. Each is unique and has made the choice to love and serve God. Angels who have fallen, in other words turned away from God, are demons.

“Some angels sinned. We don’t know exactly what they did wrong, but their ‘fall’ was a result of radically and irrevocably rejecting God and His reign” (EWTN).

There are nine choirs of angels which are classified according to their function as messengers, guardians, or attendants at God’s throne. The highest choirs, Cherubim, Seraphim, and Thrones contemplate God. Dominions, Virtues, and Powers govern the universe. Principalities, Archangels, and Angels are messengers (see also “God’s Army: The Truth about Angels”).

The three we know from the Bible are archangels St. Michael (seen in Daniel, Jude, and Revelation), St. Gabriel (in Daniel and Luke), and St. Raphael in Tobit. These are the only angels whose names we know, and their names have meanings. Michael means “who is like God?”, Gabriel means “God is my strength,” and Raphael means “God has healed.”

In addition, we are all given guardian angels at birth.

“Beside each believer stands an angel as protector and shepherd leading him to life” (CCC 336).

Our guradian angel is responsible for helping us avoid spiritual danger and “may help us avoid physical danger, particularly if this will help the person achieve salvation” (NC Register).

The Angels of Loreto

Catholic tradition tells of a miraculous story of angels moving Mary’s house. In the late thirteenth century, the Holy House of Nazareth, which many people believed was the place where the Annunciation occurred as well as the home of the Holy Family, disappeared. At the time, the Crusades were over and Christian holy sites were being destroyed. Many believe that on May 10, 1291 angels moved the Holy House of Nazareth from Palestine to what is now Trsat, Croatia. The appearance of a house was a surprise and the pastor of the local church, Alexander Georgevich prayed about it. Mary appeared and confirmed in a dream that this was her house. He was then healed of a long illness.

Three years later on December 10, 1294 angels moved the house again. Shepherds said they saw the angels carrying it through the air. It landed in Italy where many pilgrims came to see it and pray. When it was in danger, angels moved it yet again to where it resides now in Loreto, Italy.

Science supports the veracity of this story.  Certain things about the structure in Loreto are notable:

God of the Fantastical and the Impossible

The house is encased in marble in the Basilica of the Holy House and is a shrine visited by many pilgrims. In the sixteenth century a message was inscribed on the wall announcing that this is the home where Mary was born and greeted by the Angel Gabriel. It was moved via angels to Loreto.

Many popes and saints have visited the house including St. John Paul II, St. Francis de Sales, and St. Ignatius of Loyola.

Did the angels really carry Mary’s house through the sky to save it from destruction? There seems to be evidence they did. It comes down to faith. It seems fantastical and impossible but isn’t God the master of both? If faith the size of a mustard seed can move a tree (Luke 17:6) certainly God, the creator of all can move a house.

Angels: The Biblical Story of Our Unseen Allies

Behold the Handmaid: What the Annunciation Reveals to Us

Guardian Angels, Watch over Us

The Annunciation: 'Greatest Event in Our History'
The Extraordinary Story of Loreto
In Attendance with the Angels
Has Ascension's free media strengthened your faith?
You can now offer ongoing support for this content with a recurring gift.
Support Ascension