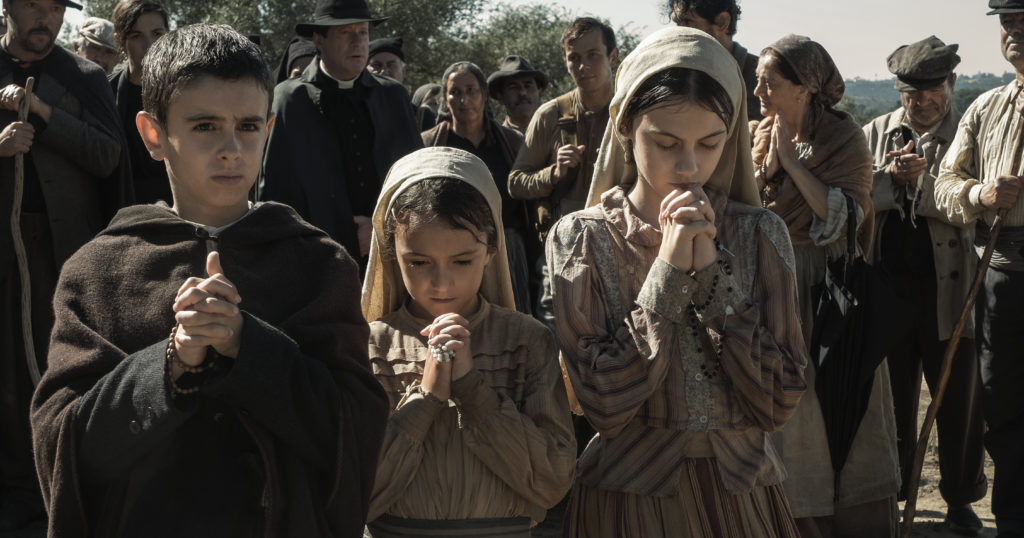 The movie Fatima was just recently released in theaters and drive-ins around the country and is available on just about every streaming service. Many movies have been made about Our Lady’s apparitions at Fatima, Portugal in 1917, and each emphasizes different aspects of the story.

But no movie has done it quite this way before, and I think the producers have touched on something important for our time. While the visions and the message are critical to the story, I believe the objective of this movie is for us to identify with Lucia as she struggles to remain faithful to the truth in the face of persecution.

Culture on the Attack

Lucia lives under a government that is openly atheist and anti-clerical. You hear the mayor extolling secular beliefs and insulting God and the Catholic Faith. People clearly feel threatened and fearful that, if they do or say the wrong thing, they could lose their livelihoods or be sent to prison.

In the U.S. today, while our religious freedoms are beginning to erode, our government still supports the right of free worship. But the culture at large, controlled by mainstream and social media, sends a very different message. As Noam Chomsky famously said,

The media in our day take the place of the government in Lucia’s day, destroying people’s livelihoods and reputations if they dare step out of line of what’s “politically correct.” So extreme has gotten this retaliation against people who dare to disagree with the prevailing views that it has received a name: “the cancel culture.”

People are canceled—slandered, fired, and sued; their businesses are vandalized and their social media accounts are spammed with insults and negative reviews, scaring away customers. People live in fear of saying or doing the wrong thing. It is in this culture that we, like Lucia, experience tremendous pressure to conform to the party line and keep our beliefs to ourselves.

Staying Faithful to the Truth

Because Lucia is the oldest of the three visionaries, she suffers the brunt of the attacks by family, the local church, villagers, and the government. Her mother and her priest worry that she is lying or seeing the devil; this is understandable at first, but it goes on for too long, fueled also by fear of the government. Though many people press upon Lucia to pray for them, some neighbors are jealous and others blame her because the Blessed Mother didn’t answer their prayers. Then as now, people lose their faith because they feel God has failed them.

Lucia sees the suffering that the apparitions are causing her family and is frightened by all the abuse she receives. We see her more than once wanting to change her story, just to stop all the trouble. The poor thing! But she knows the truth. She can’t deny it. And at one point she is strengthened by her friends and an angel. This was, to me, a powerful message—that we must turn to faith-filled friends and our guardian angels to help us remain strong in the face of trials and the pressures of our current culture.

When the children are arrested, the parents try to see them but are stopped by unjust police action. But they do not respond with violence—they respond with a crowd in prayer. Martin Luther King Jr. would have been pleased with this movie’s message here: justice through love, peace through prayer.

Interestingly, the mayor, Artur de Oliveira Santos—who in real life kidnapped the children, put them in prison with hardened criminals, and threatened to boil them in oil—is not presented as a monster in this movie. He is a man who had, sadly, rejected the Faith his mother had taught him and switched allegiance to a secular, atheist message. Therefore, he is blind to the fact that what he is doing is wrong. As G. K. Chesterton warned:

“When men choose not to believe in God, they do not thereafter believe in nothing, they then become capable of believing in anything.”

We see this in this unfortunate mayor, who is not really a bad man, and I think it’s a valuable lesson for us as we struggle in our own lives with people who oppose us. Pray for them, don’t judge them, because they carry a heavy burden of unbelief.

Of course, Our Lady’s messages are a critical part of the story. I loved how the children would turn around and tell the crowd what Our Lady said as she said it! That spoke to me. We have a duty to spread the word, right away, and boldly.

Lucia struggles to understand how to fulfill the messages, but she makes the effort, and soon she is guided by heaven (Our Lady) to know what to do. We, too, must both act and pray.

No movie is perfect, and I was frustrated that Our Lady’s words were paraphrased and that people were still wet after the apparition. This is a serious mistake, since the fact that the ankle-deep mud and the soaking wet clothes were completely dry after the miracle was proof that it was not their imagination.

But Our Lady’s message comes out loud and clear—pray and offer sacrifices for the conversion of sinners and for peace. Do not offend God any longer. War and persecution will come, but we have the power to decrease or even prevent them through prayer and sacrifice.

There was not a single poor performance in this production, and I believe the actresses who played Lucia and her mother deserve Oscars. The movie was filmed entirely in Portugal and the cinematography was stunning.

This movie did take some creative license, particularly with the central theme of Lucia’s older brother being in the war. As far as we know, he was not a soldier, but some of Lucia’s relatives were, and I think this addition helped viewers experience the heightened climate of instability and underlying fear in which the villagers lived, even though they were not in direct danger from the war.

I would warn against bringing young children to the movie. There were a few scenes that made my skin crawl, and the resistance and abuse that poor Lucia experiences made the movie intense and compelling but could upset young children.

But do see it, pray through it, and ask Our Lord and the Blessed Mother to speak to you through it. This movie, I believe, was made for our times and has a message for us all.

How Do We Get Closer to Mary?

Pocket Guide to the Rosary [Book]

The Ultimate Guide to Marian Apparitions