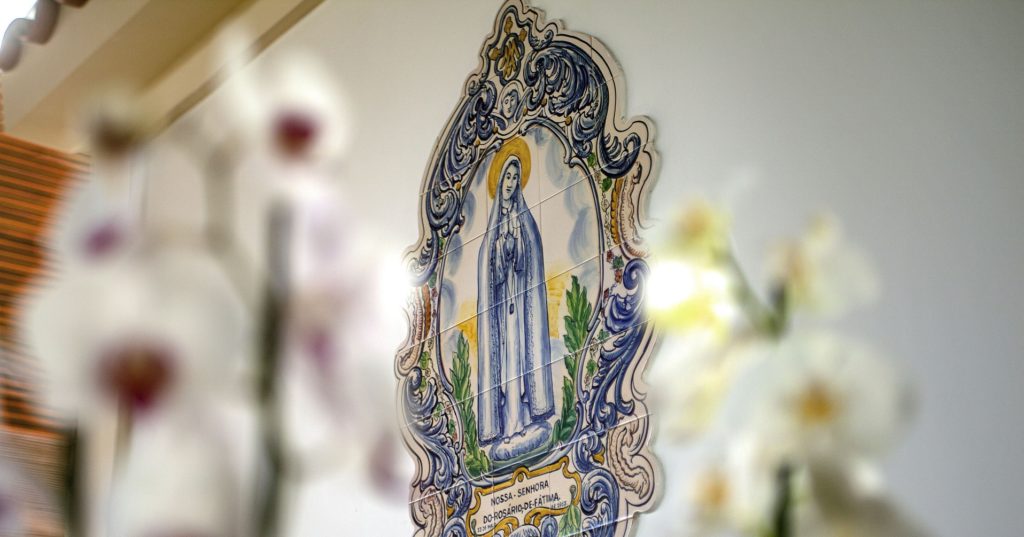 This article was originally published for the 100th anniversary of Our Lady of Fatima’s first apparition.

Exactly one hundred years ago this weekend, on May 13, 1917, an event occurred which set into motion extraordinary occurrences that would change the world and essentially define twentieth-century Catholicism. Meanwhile, 1,100 miles away and at precisely the same time, the Mother of God appeared to three shepherd children.

That story is well known: three children (Lúcia Santos, and Francisco and Jacinta Marto), Portuguese shepherds, had seen a vision of the Blessed Mother in the fields. For the next five months, the Blessed Mother appeared to the children monthly, always on the thirteenth of the month (With the exception of August, when local authorities detained the children before they reached the field to question them about the visions that had sparked such interest. However, Our Lady still visited with them on August 19, after they were released). A recurring theme was for the children to pray the Rosary, asking for peace (this was in the middle of World War I).

The visits culminated October 13, when thousands witnessed the “Miracle of the Sun.” No one but the children saw Our Lady, but others described a sudden appearance of the sun (despite hours of rain), which changed color multiple times, and appeared to move around in the sky. Further, despite the prior drenching, people’s clothes and the ground itself seemed to dry immediately. Present at the gathering were several reporters from different newspapers, who interviewed many witnesses (independent of each other) revealing similar descriptions of the sun.

After October, the monthly apparitions ended. In the following years, Francisco and Jacinta both died in the flu epidemic. Lúcia entered the convent, becoming Sister Lucia, and lived until the age of 97. More on that later.

The Pope of Fatima

While the Catholic world today rightly recognizes the anniversary of the Virgin’s appearance at Fatima, the date also marks the 100th anniversary of the ordination of Eugenio Pacelli as a bishop. Pacelli, who later became Pope Pius XII, intertwines with both Fatima, and his later successor John Paul II, who publicly shared his own devotion to Our Lady in general, and to the appearance at Fatima in particular. The connections began immediately before anyone outside of Fatima had even heard of the first vision. Pacelli’s first appointment upon his ordination was papal nuncio to Bavaria. His first assignment? Deliver to the German empire a papal initiative to end the war. Our Lady’s work for peace was already working on multiple fronts.

In 1919, a small private chapel was built at the location where Mary appeared to the children. The first Mass was celebrated there in 1921. One of the additions to the chapel was a wooden statue of the Blessed Mother carved by José Ferreira Thedim. Despite numerous issues (such as the chapel being destroyed by TNT in 1922), the statue still remains currently outside a rebuilt replica of the chapel, behind glass, resting on a podium at the exact location of the oak tree at which Our Lady appeared for the apparitions.

One of the more interesting, if unknown, Catholic rituals involves the Canonical Coronation of Images. Popes may issue a Bull by which they command that a particular image, statue or other icon be “crowned,” with a physical crown, tiara, or halo of stars. There is actually a book published by the Vatican with instructions on the prayers required when the image is crowned, either by the pope himself or by an emissary sent by him. In 1946, Pope Pius XII authorized a Canonical Coronation of the wooden statue at Fatima carved by Thedim. While a papal legate made the trip to Portugal to actually place the crown on the statue’s head (calling her “Queen of the World”), the pope spoke in a radio address to those gathered, calling Mary “Lady and Queen of Angels and Saints, Patriarchs and Prophets, Apostles and Martyrs, The Confessors and the Virgins; … the Queen of the heavens and the earth, glorious, dignified Queen of the universe: Regina Caelorum.”

So what began on the day of his episcopal ordination continued to play a part in his life twenty-nine years later, and not only then. Pius’ life intertwined with this devotion; he was known as the “Pope of Fatima” with good reason. The coronation may still have been on his mind when he wrote the 1954 encyclical on the Queenship of Mary, Ad Caeli Regnum. However, even six years before the coronation, his 1940 encyclical Saeculo Exeunte was the first occasion in which an official document from the pope referred to Fatima. He met with Sister Lucy on multiple occasions, which was an influence in his 1942 dedication of the whole world, including Russia, to Mary’s Immaculate Heart.

Another event for which Pius XII is known is being the most recent pope to have made an infallible ex-cathedra statement, when he reaffirmed the Assumption of Mary as dogma in 1950. Even this has a tie to Fatima. In the days leading up to proclaiming it, Pius had witnessed on three occasions, in the Vatican Gardens, the same miracle of the sun that was seen in Fatima years before. He took this as validation of the proclamation. As if in confirmation, he saw it a fourth time, a week after making the proclamation, but never again; he admitted to going back into the gardens to see if it would recur.

Just eleven days prior to Pius’ death, one of the last bishops he appointed was ordained. On September 28, 1958, the newly appointed Auxiliary Bishop of Kraków, Karol Józef Wojtyła was ordained. Through most of his life, Wojtyła maintained a deep devotion to Mary, but, though familiar with Fatima, did not feel the same sort of closeness as Pius XII had. That would change, however, about two years after he was elected pope taking the name John Paul II. In 1981, John Paul II was shot in St. Peter’s Square. He survived the attempt, but barely: he lost three-quarters of his blood, requiring 5 hours of surgery. It was not lost on him that the date of the attack was May 13, 1981: sixty-four years to the day after the first appearance at Fatima. From that point forward, he felt a closeness to Fatima, seeing Our Lady as a protecting mother over him, and over the Church. Perhaps this is why, when he visited Fatima in 1991 (on May 13: the tenth anniversary of the assassination attempt), during Mass, he said the “Universal Motherhood” of Mary “is the secure anchor of the salvation of all mankind.”

That was the second of three visits made by John Paul II to the shrine. The other two also contained significant symbols of his love and attachment to Our Lady. When he visited in 1982, he presented the diocesan bishop one of the bullets fired at him the previous year. This bullet now adorns the crown authorized by his predecessor Pius XII. Among the many beautiful jewels set in the crown out of love of Mary sits a piece of lead fired in hate. In the Jubilee year of 2000, John Paul II also visited Fatima. On this pilgrimage, two items of significance occurred. First, he added the May 13 Feast of Fatima to the universal Church calendar. Secondly, he beatified the two deceased shepherd children, Jacinta and Francisco.

One Queen, Many Blessings

Thus we see that two popes were connected, not just to a physical crown, but to all that crown stands for: Mary’s Queenship, of their lives and of the whole world. This link is shown by providential timing. The visions began the same time as Pacelli’s ordination as a bishop. The connection continued when his own life ended just after Wojtyła’s ordination as bishop. And, perhaps as a final sign of God’s providence, John Paul II’s own life ended in April 2005, just weeks after the death of Sister Lucia. God’s providence is seen throughout all of this.

Now, just over twelve years after Pope John Paul II and Sister Lucia died, exactly seventeen years after John Paul beatified the two children, precisely thirty-six years after the assassination attempt, and one hundred years to the day after a bishop was ordained and the Mother of God appeared to three children, another pope arrives. Francis today will visit Fatima. During this trip there will also be a canonization: Pope Francis will complete the process begun by John Paul in 2000 and name Jacinta and Francisco saints.

Forgive that You Might Be Forgiven: Practical Tips on Letting Go

Matt Dunn joined Ascension in 2014. He studied political science, business technology, and business management at Delaware County Community College and Temple University. Writing is not his only creative outlet: when not in the office, he can be found on stage as a member of Stealth Tightrope, a local improvisational comedy troupe, or as a musician. A clarinetist with the Merion Concert Band, Matthew also enjoys playing professionally on occasion.