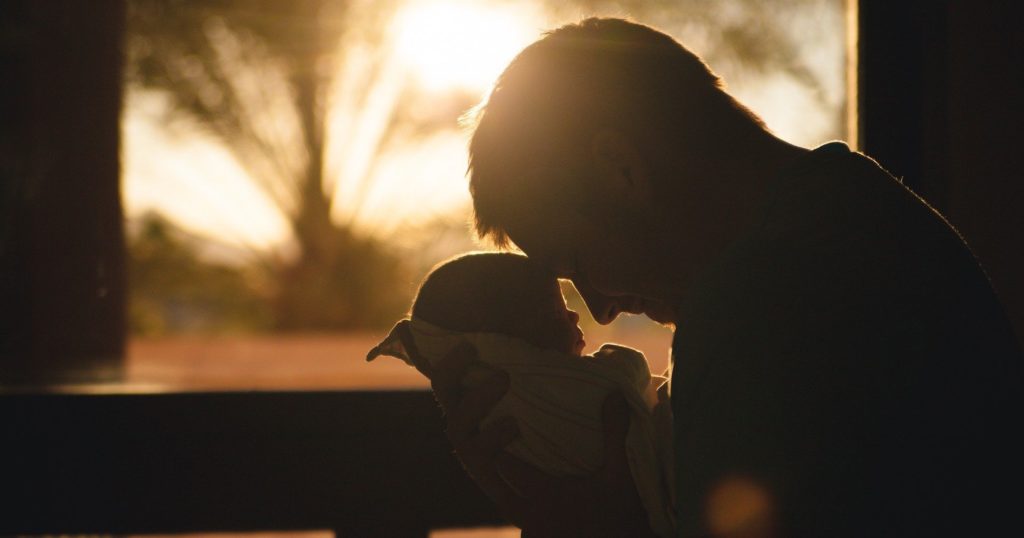 This is my first Father’s Day. My first child, Joseph Anthony, was born just a few weeks ago, and I was asked to write an article from my perspective as a new father.

For years, I’ve been fulfilling various roles of spiritual fatherhood, but now fatherhood is something truly existential for me. From a faith perspective, the role of fatherhood is highlighted even more by the fact that God chose to reveal himself as Father. Earthly fathers are always imperfect, but we must remember that it is not that God is like an earthly father, but rather that earthly fathers are called to be like God. With God as the source of all fatherhood, earthly fathers are but imperfect models of our Heavenly Father. This makes striving to be a good father even more humbling and important. I ask myself: how will my son come to understand God the Father after my example? Will my witness come through without being obscured?

Throughout Scripture, God shows us what it means to be a good father. Scripture shows us that fathers lead, protect, guide, set an example for, provide for, strengthen, affirm, and love their children. In my short time as a new father, my experience has already been that fulfilling these roles provides satisfaction that feels very natural and right.

Fathers provide leadership and initiative. As Joshua said in his role as father:

“As for me and my household, we will serve the LORD.”

Fatherhood is a relation that starts at conception and lasts forever. As soon as my wife and I were aware of the new life conceived, I led by having us join in claiming the baby for God. We were blessed with a healthy baby boy born in May, but I know of so many couples who have suffered miscarriages. Even then, a man becomes a father before God—even if not in the eyes of our society. As the Psalmist writes of the Lord:

“You formed my inmost being; you knit me in my mother’s womb.”

Thus immediately when the moment conception is discovered, there’s a new responsibility and leadership that a father assumes.

Fatherhood carries with it the responsibility of protection. As we read in Matthew’s Gospel:

Pregnancy itself isn’t easy, and accompanying my wife through the experience made me feel for what it must be like for expectant single mothers. My wife didn’t have to go through it alone when things got rough. She didn’t have to go to the doctor’s appointments by herself (at least not until new COVID-19 restrictions!) or worry about anything else on her own.

When my wife went suddenly into very hard labor, that was another natural moment for protection. I was the only one at that moment who could comfort her and get her into that car to go to the hospital in the middle of the night. When we got there, I was the only one who could breathe enough to answer the nurses’ questions. When she had to go into an emergency C-Section a few hours later, I provided for her to receive the anointing of the sick before we all went into the operating room. There was a knot in my stomach going in knowing my wife and child were in danger, but the sacrament brought us peace.

Guide and Set an Example

We read in Proverbs:

“Hear, O children, a father’s instruction, be attentive, that you may gain understanding!”

When our son was brought out of the womb by the medical team, he was crying loudly as healthy babies do. But when I was brought over to him as the nurses were weighing him and stamping his footprints, the sound of my voice was the only one that would calm him down. He recognized my voice from the womb. It reminded me of Jesus speaking of himself as the Good Shepherd:

Children are like sheep, and their parents are their natural shepherds. They naturally look to them for guidance and example, even when it seems they don’t want it. Later when our son was very hungry, he was crying and waving his hands around. I had a bottle of mom’s milk and was lowering it to him, but he pushed it away. When I carefully brought it down again through his waving arms to the tip of his lips, he realized that that was what he really wanted after all and became peaceful again. I thought of how many times God has done that in our lives, even though we push him away.

“What father among you would hand his son a snake when he asks for a fish? Or hand him a scorpion when he asks for an egg? If you then, who are wicked, know how to give good gifts to your children, how much more will the Father in heaven give the holy Spirit to those who ask him?”

In addition to providing monetarily, there are many ways of providing that go unnoticed, from repairs around the house before they get out of hand to taking care of bills and paperwork before they accumulate. There’s something about the connection of Father’s Day to power tools—it feels good to provide for your own through fixing and building.

Scripture calls God a “rock” because he is strong and unmovable—a sure refuge in uncertain times. Fathers are called to imitate God in that way. A crisis in manhood leads to a crisis in fatherhood, which hurts children in their development. A father is meant to be always there and always dependable. This helps his children feel secure. While addictions and selfishness of all kinds can get in the way of this fatherly ideal, children’s needs can be embraced as an antidote to self-centeredness. Sometimes I find it so hard to put those house projects away to help tend to baby’s more immediate needs, but this is part of the path to holiness in marriage—to be led to put your own wants aside for the needs of your wife and children.

The discipline of the LORD, my son, do not spurn;

do not disdain his reproof;

For whom the LORD loves he reproves,

as a father, the son he favors.

God the Father declared to Jesus at his baptism, “You are my beloved son” (Mark 1:11). He provided this critical affirmation of his son, modeling a father who not only challenges but also affirms his son. It’s so important to our self-identity to know we’re loved and accepted by our father.

Above all, a father loves his children, reflecting God’s own love for his children. Even when it goes unnoticed, he is motivated by love in going to work, paying the bills, taking care of the home, or spending quality time with his children. He is called to sacrificial love for his family, as Christ loved the Church and died for her.

St. Joseph, foster father of Jesus, pray for us!

The Challenge of Fatherhood

Michael J. Ruszala is the author of several religious books, including Lives of the Saints: Volume I and Who Created God? A Teacher’s Guidebook for Answering Children’s Tough Questions about God. He holds a master of arts degree in theology & Christian ministry from Franciscan University of Steubenville. Michael is pastoral associate for faith formation & evangelization at St. Leo the Great Parish in Amherst, New York, music director & organist at St. Teresa Parish in Buffalo, and adjunct lecturer in religious studies at Niagara University in Lewiston, New York. He lives outside Buffalo with his wife Kate and young son Joseph. For more information about Michael and his books, visit michaeljruszala.com.

Featured image by StockSnap from Pixabay