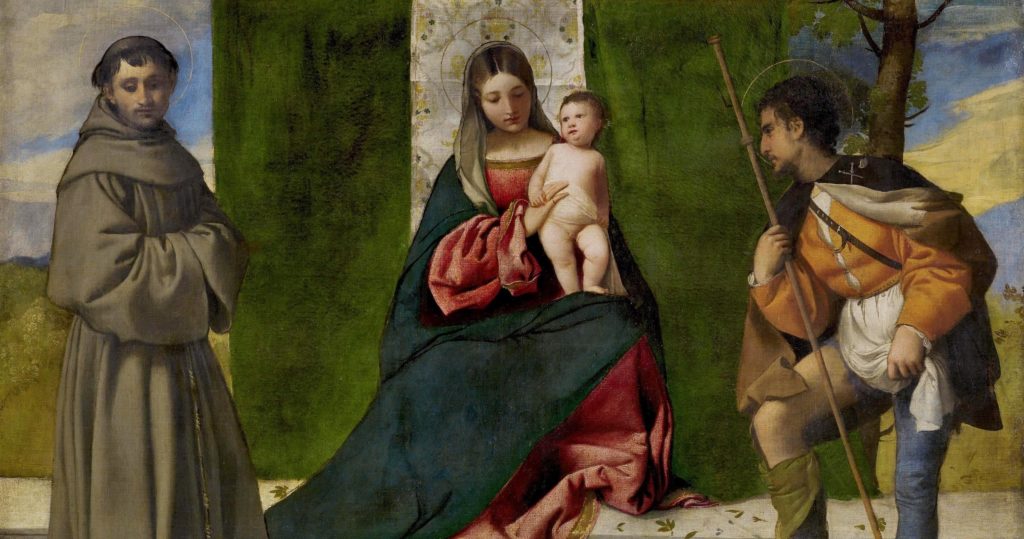 Eloquent preacher. Insightful teacher. Powerful miracle-worker. St. Anthony of Padua is many things to many people, but of all his varied roles, none leaves us with a more powerful example to follow than that of his fervent and humble response to the call that God places on each of our lives—the call to discipleship.

Born in 1195 AD in Lisbon, Portugal, Anthony was originally named Fernando Martins. Though he was born into an affluent family, he found religious life attractive from an early age. At 15, he joined the Canons Regular of St. Augustine in Coimbra, Portugal, where he studied theology and Sacred Scripture.

Eventually, Franciscan monks came to the area, settling outside Coimbra in a small hermitage dedicated to St. Anthony of Egypt. He was intrigued by these monks and their way of life, but what really caught Fernando’s attention was their missionary spirit. When the bodies of the first Franciscan martyrs, missionaries to Morocco, were returned to the city, Fernando felt a stirring in his soul. Receiving permission from his superior, he left the Augustinians and joined his Franciscan brothers, hoping to become a missionary as well. In recognition of this profound change, he took the name Anthony.

Soon after his acceptance into the order, Anthony was indeed sent to Morocco as a missionary—a seeming fulfillment of his dream. But when he arrived, Anthony fell terribly ill. Almost as soon as it had begun, his missionary journey was over, and he was put on a ship destined for Portugal so he might recover.

But the ship never made it home. Caught in a vicious storm, the ship was blown off course and landed on the shore of Sicily, Italy. From there, the party travelled north, where Anthony remained for the rest of his life, in the company of his brother Franciscans.

Anthony’s health having improved, he now served his new community without much notice. But that all changed one night in 1222, when he attended the ordination of a group of Franciscans and Dominicans. The Dominicans, known for their preaching, were expected by the Franciscans to deliver the homily for the evening, but the newly ordained priests insisted that they were unprepared. Anthony’s superior then instructed Anthony to preach, and while Anthony at first resisted, when pressed, he obeyed, delivering a homily so eloquent and beautiful that it perked the ears of the founder of his order, St. Francis of Assisi.

Though typically distrustful of such learned men, Francis understood that if his brothers were to effectively evangelize, they would need to have some basic knowledge of theology. He reached out to Anthony and asked him to become a teacher to the Franciscans, an offer which Anthony humbly accepted.

Though he spent some time teaching in universities in northern Italy, Anthony was best known for his preaching, which was at once brilliantly profound, and at the same time, simple enough that the truths of which he spoke were made accessible to all. He was also characterized by a great love for the poor, and was renowned throughout the region as a miracle-worker.

Though he is the patron saint of sailors, fisherman, and the poor, Anthony is typically invoked to find lost articles, thanks to an event that happened during his years spent teaching the Franciscans. A novice, disenchanted with the monks’ way of life, had decided to leave the hermitage, but before he did, he stole Anthony’s Psalter, a very valuable item in a time before the advent of the printing press. Anthony, upon realizing the book had been stolen, prayed for its return, and the novice not only returned the book, he also returned to religious life.

Another well-known miracle is that of Anthony preaching to fish. While evangelizing in Rimini, Italy, Anthony’s words were falling upon deaf ears. Moved by an inspiration of the Holy Spirit, Anthony went to the seashore and began to preach to the fish, who, upon hearing his words, approached the shore and lifted their heads out of the water in rapt attention. This strange occurrence proved enough to attract the attention of his previously disinterested listeners, who then received his words with an open heart.

By the time of his death in 1231, the 36-year-old Anthony already had a reputation for sanctity. He was canonized by Pope Gregory IX a mere year after his death, which remains the fastest canonization to date. When his body was exhumed in 1263, his tongue was found to be incorrupt, still appearing fleshy and moist, an indication, so exclaimed St. Bonaventure upon its discovery, of the merit that its words had before God.

An Example of Discipleship

While there is much wisdom that can be gleaned from the extraordinary life of this famous saint and Doctor of the Church, perhaps the greatest lesson that Anthony teaches us is that of deep humility. Here are three lessons entrusted to us by this holy man:

St. Anthony of Padua, the Evangelical Doctor, Was a Simple Man

Featured image of The Virgin and Child between Saint Anthony of Padua and Saint Roque (c. 1508), by Titian sourced from Wikimedia Commons