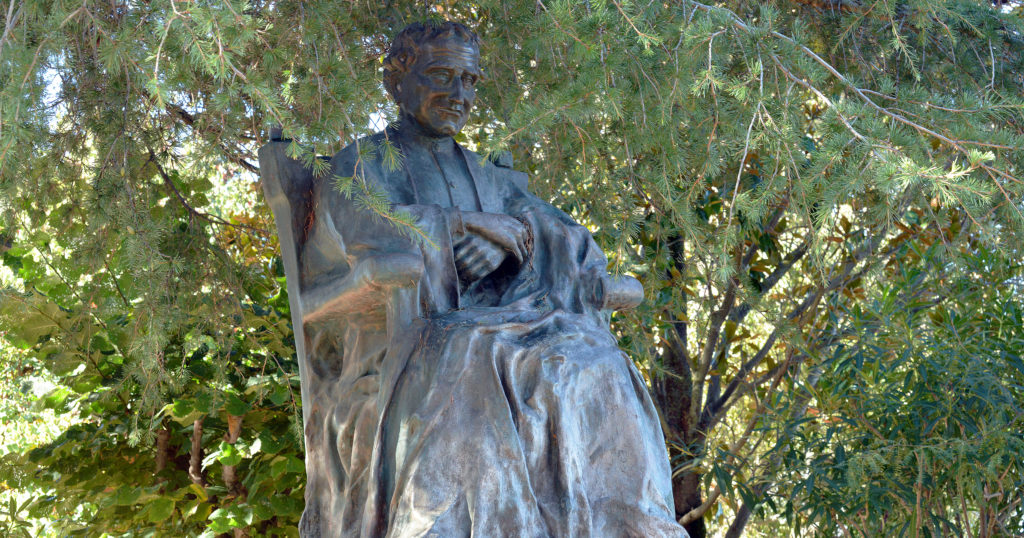 “Discipleship” has been a Catholic buzzword for nearly a decade. We promote it, we recommend it, and sometimes we even practice it. But what does it mean to live a life of discipleship?

I think this might be a term that has to be understood through stories. Discipleship by its nature can’t rely on a rigid set of rules, because each discipleship is as unique as the people in it. If we want to learn how to do it well, we need to learn about people who have excelled at it.

Enter John Bosco. He’s one of our most beloved saints, but also a reminder that Christian relationships should exemplify joy. This is a man who would earn his students’ respect by doing acrobatic tricks, played practical jokes on other priests, and had a life filled with the kind of humor that only an abundance of children in a confined space can bring. He was also deeply in love with Christ and Our Lady, could read souls, had prophetic visions, and founded a religious order that is still pulling in vocations today.

His relationships are what made all this possible.

The first person Bosco learned to imitate was his mother, Venerable Margherita Occhiena. Bosco’s father died when he was only two. Margherita was left to provide for herself, her two sons, and her stepson. The boys learned hard work at an early age on the family farm.

Margherita was uneducated, but clearly did a good job of teaching her children the Faith. They would pray as a family every morning and evening. She would point out God’s beauty in creation, and remind her boys that even though their biological father was gone, they had a Father in heaven. She demonstrated Christian charity by giving to the poor despite her own poverty. She was also fond of Catholic guilt, frequently reminding the boys that God was always watching them even if she wasn’t.

Their home wasn’t necessarily happy. His older half-brother, Anthony, was bad-tempered and frequently caused unhappiness. Margherita treated him like her own son, replying to his anger with kindness. Her example inspired little Bosco, who was noted for his natural joy and cheerfulness his entire life.

When he was nine, he had the first of many prophetic dreams he would have throughout his life. He was in a yard, where a group of boys were playing loudly. Some were fighting while others were swearing. Bosco dreamed that he ran at the boys and began to hit them while screaming at them to stop. Then a dazzlingly beautiful figure in white appeared next to him.

“Not with blows, but with gentleness and charity you must take care of them and win their hearts. Teach them the beauty of virtue and the ugliness of sin,” the figure said.

When Bosco asked the man who he was, he said that he was the son of the woman Bosco’s mother had taught him to salute three times a day. (source)

Bosco was ordained in 1841 at age twenty-six. A local parish wanted him to be their pastor, but Bosco decided he needed more priestly formation first. If you don’t understand why that’s incredible, ask a seminarian how they would feel about having a few years tacked on to their studies before they could go to a parish.

St. Guiseppe Cafasso invited Bosco to join his Ecclesiastical Institute in Turin where Cafasso trained young priests in parish work. “Training” isn’t really a strong enough word to describe the way he formed those young men. Many of them are now  in the process of canonization. They include Blessed Francesco Faà di Bruno, who founded an order and helped unwed mothers and prostitutes; Blessed Clemente Marchisio, who founded an order and created jobs for poor girls; and of course, John Bosco himself. Even Cafasso’s nephew, Blessed Giuseppe Allamano, is on the road to sainthood.

The point of this giant list of saints is this: holiness doesn’t happen in a vacuum. Even the most isolated hermit came from somewhere. Our community will be a determining factor in our discipleship. Some people, like Cafasso, have a gift for helping others to become their truest self, their saintliest self. We all need a Cafasso so we can be a Bosco.

Bosco had met Cafasso briefly in seminary, but now he put himself completely under the older priest’s tutelage. Cafasso was his spiritual director for twenty-five years. True to Cafasso’s nickname as “the priest of the gallows”, the two would visit prisons together. There they saw conditions unfit for human beings. Many of the men were barely adults but lack of education coupled with temptations had resulted in their being sentenced to death.

These visits showed Bosco the importance of giving children a preventative education. He knew that training children in virtue and skilled trades could help them lead holy lives as free men. Cafasso supported his idea.

Bosco began to host weekly meetings for young people while he was still a student at the institute. The number of boys (and the subsequent racket)  grew until he had to find a new place for them, preferably not one filled with studying priests. He gathered people who wanted to help the boys and together they purchased a property. The volunteers helped build a chapel, classrooms and workshops. His mother even cut up her wedding dress to make altar linens.

They called the finished  institute the Oratory of St. Francis de Sales.

Bosco took in orphans, urchins, and children who had come to the city looking for work. All were welcome at the Oratory. Some would work in factories during the day, where Bosco would sometimes visit them. Others stayed to pursue higher studies and eventually become priests or clerks. Each student’s track was decided by their intellectual capacity, not their financial situation or family background.

One of the pupils was St. Dominic Savio. Like Bosco, Savio was known for his joy. He was fun. He would organize games, lead expeditions to the countryside, and lead the others in singing. I’ve found that most biographies of Savio paint him as an overly pious glass doll. Bosco would disagree with that portrayal. He once said:

“Dominic catches more fish with his little games than many preachers with their sermons.”

Savio naturally attracted even the unruliest other boys. He didn’t gloat in popularity, though, and instead organized older boys to help mentor younger ones and do manual labor around the property. All of the older boys in Savio’s circle went on to become the first Salesians.

Bosco poured his heart into all of his boys. However, he was in a position to have rare insights into Savio’s personality (and his ability to read souls didn’t hurt matters). For example, Savio seems to have shared his gift for prophecy and intuition. One time Savio came to Bosco, telling him he was urgently needed and providing no details about the circumstances. Bosco immediately stopped what he was doing and followed his student. He arrived in a tenement just in time to reconcile to the Church a dying man whom he had never met or heard of.

When Savio was dying, his doctor tried to persuade him to go home. He begged to stay at the Oratory. Bosco was present at the boy’s deathbed, reading aloud from Savio’s prayer book.

St. John Bosco, Pray for Us

Savio is the most famous, but Bosco poured himself into hundreds of boys who would have otherwise most likely found themselves in prison. Each of his students felt as though they were the most loved by him. He would frequently say things like, “Come [to confession] whenever you like, whenever you can, my dear children, and you will find me always ready, even in the middle of the night.”

John Bosco was able to love like this because he learned from the best. His saintly mother and Cafasso treated him as someone worth loving. He brought that love to the poorest and most vulnerable members of society. By his intercession, may we do the same.

Adoring the Eucharist Is About Relationship with God

What is a Disciple?
Ascension Roundup May 25-31
10 Points for Effective Parish Ministry
The Missions of Sts. Peter and Paul Passed on to Us
Has Ascension's free media strengthened your faith?
You can now offer ongoing support for this content with a recurring gift.
Support Ascension