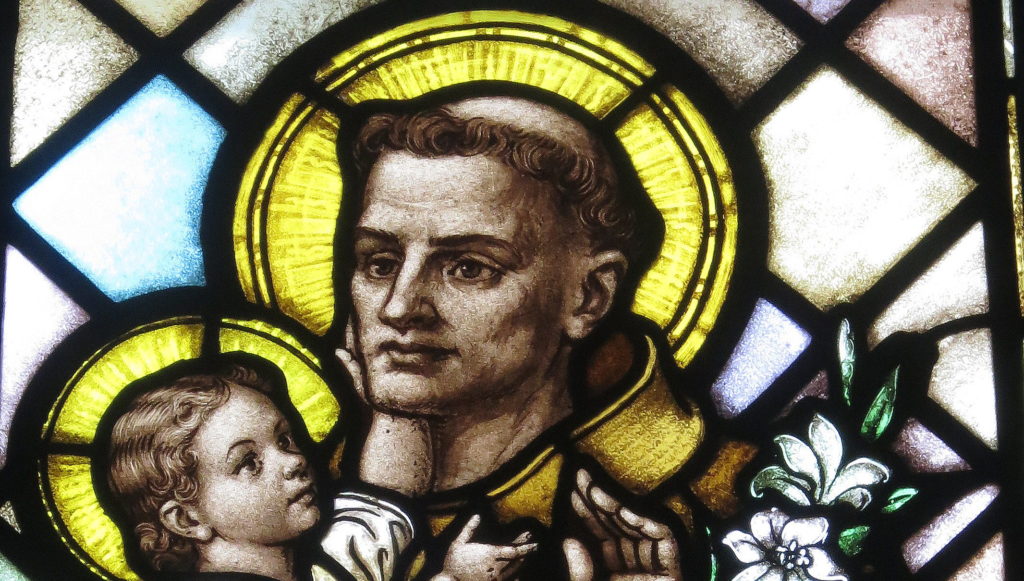 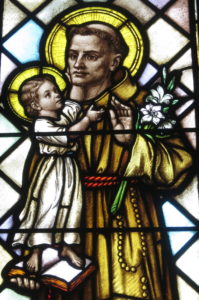 St. Anthony of Padua is one of the most popular and beloved saints. It may be a surprise to some that the finder of lost items is also a doctor of the Church, even given the title of Evangelical Doctor as proclaimed by Pope Pius XII in 1946. His South American devotees, who call him St. Anthony of Lisbon after his birthplace, at first resisted his new title of doctor, fearing that it would disconnect him from the common folk.

St. Anthony—who was born August 15, 1195 and died June 13, 1231—was indeed a learned man of aristocratic birth, but he preferred humility to the appearance of erudition and preaching to the common people over university privileges. Having studied as an Augustinian in Spain and then transitioning to life as a Franciscan in Italy, many of his fellow Franciscans thought washing dishes to be his greatest skill. It was only when St. Anthony was asked to preach for a special gathering that his gifts were discovered. He was sent to teach at the University of Bologna where he received many accolades, but he chose only to remain in academia for a time. He was also entrusted by St. Francis with the formation of the Franciscans.

St. Anthony’s reputation as finder of lost items actually comes from this time, when he prayed and found his book of annotated psalms which had been taken by a wayward novice leaving formation. Not only did the book return, but also the novice to the Franciscan order.

St. Anthony crafted his preaching so that it was just as accessible to the learned as to the unlearned. We read of him in Butler’s Lives of the Saints:

“The learned admired the loftiness of his thoughts, and the strong images with which he painted the most sublime mysteries, and added an unspeakable dignity to the most obvious and common truths of religion and morality; yet a natural simplicity rendered all his discourses no less intelligible and easy to the most vulgar understandings.”

St. Anthony travelled about to preach and thousands would gather to hear him. His preaching was so popular that often he could only preach outdoors.

A collection of St. Anthony’s sermons is preserved to this day. While we cannot hear the inflection of voice or the use of emotion with which he was said to stir the hearts of penitents, we can glimpse some highlights of his thought. He was a biblical scholar. His teaching was centered on Scripture, and especially the gospels. This is why he is called the Evangelical Doctor. He is even quoted saying, “Theology is the science of Sacred Scripture.” Centuries later, the Second Vatican Council would teach, “the study of the sacred page is, as it were, the soul of sacred theology” (Dei Verbum, no. 24). The Catechism of the Catholic Church (no. 117) also reaffirms the spiritual senses of Scripture—moral, analogical (speaking of Christ), and anagogical (speaking of heaven). St. Anthony, following the Church Fathers whom he had studied deeply, immersed his preaching in those mystical and symbolic ways of interpreting Scripture. He saw throughout the Bible a “concordance” of events, as he termed it, which communicates a unified message and culminates in Christ.

St. Anthony draws out the allegorical sense of the prophecy in Isaiah, “For a child is born to us” (Isaiah 9:6). He explains in the most tender of terms how it shows us what Christ is like. St. Anthony preached:

“This God is made a little child for us, is born for us today. There are many reasons why Christ is called a little child; and for briefness’ sake here is just one: if you hurt a child, make him cry, or smack him; but then show him a flower, a rose or something like that, and after showing it give it to him—then he will not remember the hurt, he will put away his indignation and run to embrace you. In the same way, if you offend Christ by mortal sin, or inflict any kind of injury on him, but then offer him the flower of contrition or the rose of tearful confession (‘Tears are the soul’s blood’), then he will not remember your offenses, he will take away your guilt and run to embrace and kiss you.”

Likewise, St. Anthony draws out the moral sense of the passage in which the baby Jesus was wrapped in swaddling clothes and laid in a manger:

“O poverty! O humility! The Lord of all is wrapped in a scrap of cloth! The King of angels lies down in a stable! Blush, insatiable avarice! Be ashamed, human pride!” (The Nativity of the Lord, 7).

St. Anthony is said to have stirred many to repentance. He understood the situations which he entered for preaching, and he did not embarrass or confront sinners directly. Instead, he pulled on the heartstrings and pricked the conscience as if through the backdoor. Above all, he was able to truly witness because he practiced what he preached. He, the humble dishwasher-turned-preacher, possessed the humility to which he exhorted his hearers. We read in Butler’s Lives of the Saints:

“To his other advantages he added that of the most graceful action and accent, by which he knew how to get into the very souls of his hearers by seizing on their senses, having learned that man has as much of a sensible as of a rational creature…. Charity and prudence took off the edge of harshness from his reprehensions, and his very reproofs were not bitter or austere, but amiable and insinuating. While he beat down presumptuous sinners by the terrors of the divine judgments, he at the same time took care to raise and encourage their sinking souls by confidence in the divine goodness and mercy. He opposed the fashionable vices and growing heresies of those times with equal vigor and success. The most obstinate heretics and the most hardened sinners threw themselves at his feet, declaring themselves conquered.”

He was called the “Hammer of Heretics” because of his effectiveness in bringing about the conversion of heretics. St. Anthony likewise opposed popular vices of the day. Once when the heretics were unwilling to listen to him, legend has it that the fishes rose to the surface of the water to hear St. Anthony preach. Pope Gregory IX appreciated St. Anthony’s fidelity to the Church and his gifted preaching, and made him his official court preacher. There, St. Anthony’s preaching came to be dubbed as the “Jewel Case of the Bible.” Pope Gregory himself called St. Anthony the “Ark of the Testament.”

St. Anthony never wrote a work of systematic theology, but his written sermons, expounding on the Bible in its spiritual senses, are themselves a work of biblical theology. In his book St. Anthony of Padua: Doctor of the Universal Church, Very. Rev. Raphael M. Huber, O.F.M. writes:

“he did expound the Sacred Text in such a deeply theological and a clearly mystical manner that these very sermons have become, in a sense, a textbook of dogmatic and moral theology; at least we find in them the marrow and quintessence of every theological tract.”

A Forerunner of Marian Dogma

St. Anthony, in the thirteenth century, was ahead of his times in articulating numerous orthodox theological doctrines. According to Huber, in a time when the Immaculate Conception was not universally understood, St. Anthony taught that the Blessed Virgin was “a throne of God made of pure ivory” and that she was “without the ardor of concupiscence and lily-white in her innocence”. He believed that she must have been preserved from original sin in order to be worthy to bear the Son of God.

St. Anthony also saw the implications of this for her Assumption into heaven. Though the Assumption was not celebrated everywhere, St. Anthony celebrated the Assumption on August 15 and preached on it. He argued from Scripture for the appropriateness of Mary’s Assumption, and drew parallels from various Old Testament passages to make the case. Drawing typology from Esther to Mary, he writes:

“This our glorious Esther is today led by the hands of the angels to ‘the chamber of king Assuerus’, ‘the heavenly bride-chamber in which the King of kings, blessedness of the angels, sits upon a starry throne,’ Jesus Christ, who loved this glorious Virgin ‘above all other women’, her from whom he took flesh, who found grace and mercy in his sight above all women. O immeasurable dignity of Mary! … truly, more excellent still was the grace of blessed Mary, who bore a Son to God the Father; and therefore she has been found worthy of being crowned this day in heaven” (Sermon on the Assumption).

A Defender of the Papacy

St. Anthony also preached on papal supremacy in a time when popes vied with emperors. He taught that Peter “was placed at the head of the apostles and at the head of the Church” and that “to him who had made a profession of Christ’s divinity before all the rest, was also given before all the other apostles the prerogative of the keys.” He also hinted at papal infallibility. In his biography of St. Anthony, Huber quotes St. Anthony, who wrote:

“Yes, indeed, Peter, as a mere man was an ignorant and illiterate person, but sitting upon his cathedra he was most wise” .

St. Anthony recognized that Peter was given a singular gift by God to interpret the true Faith.

St. Anthony, the Evangelical Doctor, was steeped in the prayerful study of Scripture in light of the Church Fathers. His main interest was in stirring hearts to the love of God and his main tool was the witness of his life, which stood to support the unique skill of his teaching and preaching.

The Bible Is Inspired by God
Hail, Full of Grace: The Immaculate Conception Explained
Using Faith & Reason in Scripture Study
The Pope, the Laity, and Christ the King Sunday
Has Ascension's free media strengthened your faith?
You can now offer ongoing support for this content with a recurring gift.
Support Ascension