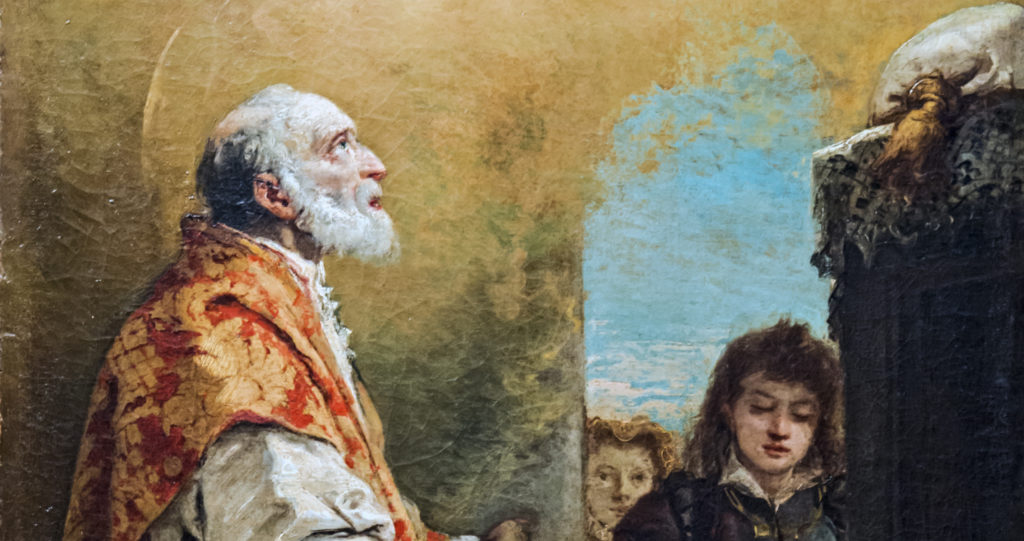 This is for all those who are having an existential crisis about their Lenten fast. Ultimately, your Lenten sacrifice should be something that brings you closer to God but sometimes that can be hard to identify. It’s generally a good idea to look to the saints when you’re confused about a devotion.

St. Benedict of Nursia dedicated chapter 49 of his rule to observation of Lent. He basically recommends doing all the stuff that we should do throughout the year but often forget. This includes private prayer, fasting from some food and/or drink, denying some sleep (health permitting), limiting idle talk and joking, and devoting time to looking forward to Easter. He specifically recommends that each of his monks pick a book at the beginning of Lent and read it each day until they are finished (RSB 48:15).

The second paragraph of his chapter on Lent is worth sharing in its entirety, so that everyone can reflect on how their Lenten sacrifices fit into it:

Everyone should, however, make known to the abbot what he intends to do, since it ought to be done with his prayer and approval. Whatever is undertaken without the permission of the spiritual father will be reckoned as presumption and vainglory, not deserving a reward. Therefore, everything must be done with the abbot’s approval.

Most of you reading this probably don’t have an abbot, and it’s not really realistic for an entire parish to share their sacrifices with their priest. But if you plan on doing something extreme, be sure to talk to a spiritual director or your pastor. It’s easy to fall into pride in these matters.

Blessed Pier Giorgio Frassati: Fasting from sweets and a retreat

I know that hating on fasting from sweets is really popular in Catholic world right now, but if our Homecoming King did it, it can’t be too bad, right?

Pier Giorgio Frassati is a great role model for anyone tempted by scrupulosity, or by overly intense fasts. He was a deeply devout young man who understood that piety and joie de vivre are not mutually exclusive, and in fact are often related.

He was disciplined in his Lenten fast in ways that make sense for us today. He would refrain from eating sweets, restrict his food at mealtimes, and attend retreats (something like this would work if there isn’t a retreat available near you). What I find particularly inspiring is his motivation. He didn’t fast for the personal satisfaction of taking austere pledges; he did it to “better celebrate a holy Easter” (source).

Another Pier Giorgio-themed Lenten resolution would be to do The Pact. This is simply a commitment to pray this prayer and do one act of charity daily. More information is available here.

Servant of God Dorothy Day: Pray daily to give up a vice

Day was a heavy smoker for years. After her conversion, she began to give up cigarettes for Lent. This made her very cranky, to the point where the people she lived with began praying she would just light a cigarette (source).

Then before Lent one year, her regular confessor told her not to give up smoking. Instead, she was to begin praying daily to give up cigarettes. It took several years, but she eventually lost her inclination to smoke.

Philip Neri is distinguished from the hordes of other Italian saints by his joyful nature, utter lack of clericalism, and being one of the few with a watchable biopic. He was also an evangelist to everyone he met—lay people, the sick, beggars, other priests, et al, which is why he has the nickname “the second apostle to Rome”.

Neri would go to public square and begin conversations with complete strangers. While this might sound like the workings of a psychopath to our introverted age, it was effective in helping him understand God’s love and bring that love to others. He would follow up his daily meetings with nightly prayers in the catacomb of San Sebastiano.

To be fair, I couldn’t find evidence that this was a specifically Lenten discipline. However, I think a lot of us could benefit from a Lenten sacrifice that causes us to interact more with the people physically near us. Maybe that means attempting a conversation with one complete stranger for each of the forty days of Lent. Maybe it’s doing something social everyday, or having some form of outreach every day to a loved one who lives out of state. You could follow this up with Night Prayer or an evening Rosary for that person. You could even do it the original Benedictine way if you wanted something a bit more challenging.

Sleeping without a pillow is a Lenten classic, but I didn’t know until writing this that St. Faustina is the possible origin of it (source). She took this on specifically because her health prevented her from making larger sacrifices, which is perhaps bittersweet news for Catholics with ill health.

As with all the saints listed here, she didn’t take on her penances simply to suffer. She mortified herself for the good of sinners and to know and love Christ better. She would also pray a daily Divine Mercy Chaplet for sinners. The DMC is great for people who (like me) struggle to pray a daily Rosary. The Chaplet is fast enough to keep your attention throughout, plus it sounds really pretty when it’s sung, regardless of language.

Do you know of any other things that saints did to observe Lent? Let us know in the comments.

What Do You Want This Lent?

3 Essential Practices for the Lenten Season

The Way of the Cross: Praying the Psalms with Jesus