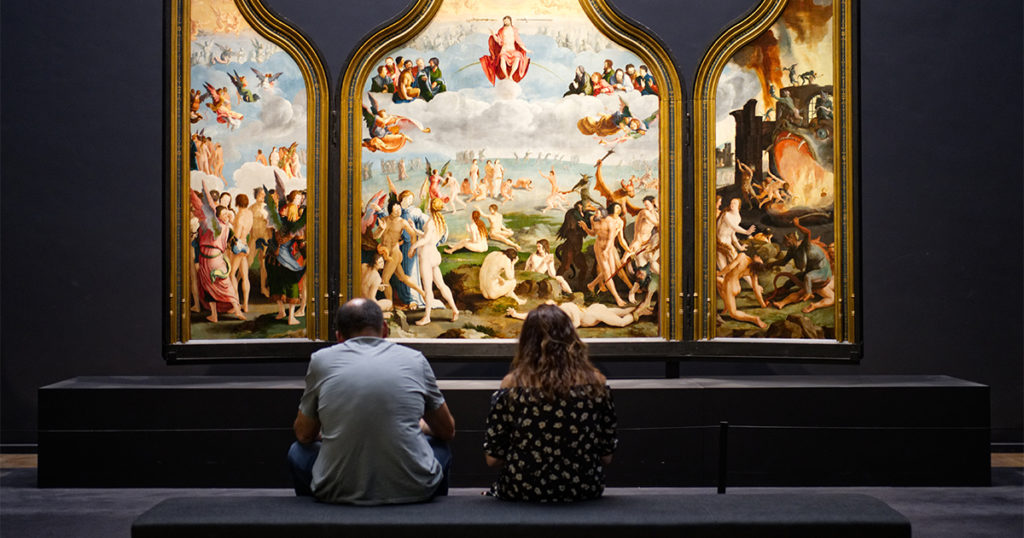 Devil and demon costumes are popular for Halloween. But sadly, many people—especially children—wear these costumes without knowing that the thing they are dressing up as actually exists. If more people knew more about the reality of demons, would there be a difference in the way we perceived these costumes, and would this affect the generally playful aura surrounding Halloween when it comes to spiritual matters?

As Catholics we profess each week at Mass in the Nicene Creed that we believe in things seen and unseen:

We believe in God, the Father, the almighty, maker of heaven and earth, and of all that is seen and unseen.

These words have huge implications. As Christians, we believe that God made everything, the things we see and the things we do not see. The implication is clear. Let’s take a closer look at some of the beings we don’t see. In particular, let’s consider the reality of demons. They exists. It is a truth of our faith. I know, to many people this may sound like the stuff of fairy tales. It isn’t, and ignoring that will cost you. So, what are demons?

Angels and demons are, for all practical purposes, the same sort of creature. They do, however, differ in one very important thing. The angels fully accept the lordship of God. They are perfect in that. The demons, on the other hand, totally reject the will of God and live in a constant state of rebellion, hating God with their entire beings. Created to love and serve the Lord, they act in total rebellion against the Lord and against their own nature. As such, they live in torment. One might ask, “why, then, do they not repent?”

Here is the great distinction between physical man and spiritual beings. Demons do not live in the confines of the physical world. We do. The physical constraints of our being limit our ability to fully comprehend all things. Thinking, learning, it all takes time.

Another good point is, as physical beings we are caught in time. Because of that, we have the ability to repent. Demons (and angels) are not physical beings. They do not have minds like ours that require neurons to fire and energy to be spent in making abstract connections. They fully comprehend all that can be comprehended by creatures. As spiritual beings, they exist outside of time. So, when the demons cast off their angelic innocence and rebelled against God, they did so completely, and, in total understanding of what they chose and without the limitations of time, they didn’t have the ability to repent. Perhaps it is more correct to say that they are not so much in rebellion as they are rebellion.

Demons Are Powerless Against God

When did that happen? When did the demons fall? It is impossible to know exactly, but the doctors of the Church have speculated. St. Augustine, in his book The City of God, reflected upon the creation story, noting that on the first day God separated the light from the darkness. This happened well before he created the sun, moon, or stars.

In this, St. Augustine saw the possibility that perhaps God was doing more than separating day from night. Perhaps God was separating the angels, those of the light, from the demons, those of the darkness. With this in mind, it becomes clear that from the very beginning of creation there has been a war raging between those who would serve God and those who rejected him.

Demons are a part of creation, they exist, and they hate God. They hate him totally, with their entire being. They are, however, not his equal. He is their Lord and creator, whether they like it or not. If God stopped willing them to exist, they wouldn’t exist. So, as much as they hate God, the demons are powerless against him.

Effects of the Fall

We, however, are created in the image and likeness of God. We are walking, talking icons of the Lord. Demons can’t hurt God, but they can definitely come against us, and they do. That is a serious statement, but you need not be afraid. You belong to the Lord. You are a coheir with Christ. In Christ, the demons are subject to you. They hold no power over you.

But, if you are not aware of how they attack, you may have been suffering the wounds of their malicious intent without even knowing it. How do the demons attack? The devil’s name gives us some clear insight. Satan, the accuser or the slanderer. What do demons do? They accuse and lie. And they are masters at it. A quick look at the story of the Fall in Genesis illustrates this.

The snake is described as the most cunning of the animals and his attack against Eve is cunning. First he takes aim at God’s faithfulness. “Is it true that you can not eat from any tree in the garden?” he says. That was not true, but there was some truth in it. Adam and Eve were forbidden from eating of the tree in the middle of the Garden of Eden.

The devil takes God’s prohibition and attempts to make it sound unreasonable. It might sound obvious to us, but it is a tactic the evil one still uses today. How often do we hear the complaint that the Church has too many “rules.”  In truth, there are not really all that many rules in our Catholic Faith. The devil however, would have us live in rebellion like he is, and so he whispers, “the Church won’t let you do anything,” and all too often, not realizing the attack, we agree with it.

Eve rebukes the devil’s lie. She calls it out for the falsehood that it is. There is a lesson there too. When confronted with the devil’s lies, we are to expose them to truth. Truth disarms that attack. In the Genesis story, that’s what happens. The devil drops that attack, but he isn’t done. Instead, he launches another. He tells Eve that she will not die if she eats from the tree, but instead that she will become like God. The lie he tells her now is not so much that God is unreasonable but, instead, that she can’t trust the Lord, that he is holding out on her. This time, Eve succumbs. She disobeys God.

In our own lives, the demons will come against us in the same way that Satan came against Eve, with lies and accusations. Lies about who God is and  who we are. He will tell us our sin is not a big deal, and then once we have fallen he will name our sin and tell us we have no worth at all. The remedy is simple. Demons have no power over us unless we give it to them. So, simply put, we rebuke their lies, tell them to be quiet and to go away.

Live in the Victory of Jesus

If you find yourself speaking words of hatred or condemnation against yourself, stop for a moment and ask, “Where did that come from?” Consider for a moment that the God who loves you would not speak those words over you. Maybe there is something sinister afoot. Then, in the authority of a beloved son or daughter of the living God, stand against whatever it is. “In Jesus name I command any spirit of accusation, lust, hatred, anger,” whatever it is you are struggling against, “to be bound and silenced in Jesus’ name, and I command you to leave and not come back. I belong to the Lord. My ransom was paid in his blood.”

And, if there is a truth in the accusation, sin in your life that has given the evil one a toe hold, go to confession and confess it. If there is hurt or abuse in your life that has given the devil a perch from which to call you broken, expose that wound to the light. Invite God to come in and bring healing into it. Seek counsel. Rebuke the lie that it defines or controls you.

We believe in things seen and unseen. The Catechism of the Catholic Church, paragraph 409, reminds us that we were born into a world at war. But, never fear. The victory has already been won. Christ prevails. We stand in that victory. So, when demons whisper their sinister attacks against you, do not act helpless. Recognize the attack, rebuke it, and stand in the knowledge that you live in the victory of Jesus Christ.

Where Jesus Went to Pray: The Eremos Grotto

Satan Is Strong but Jesus Is Stronger