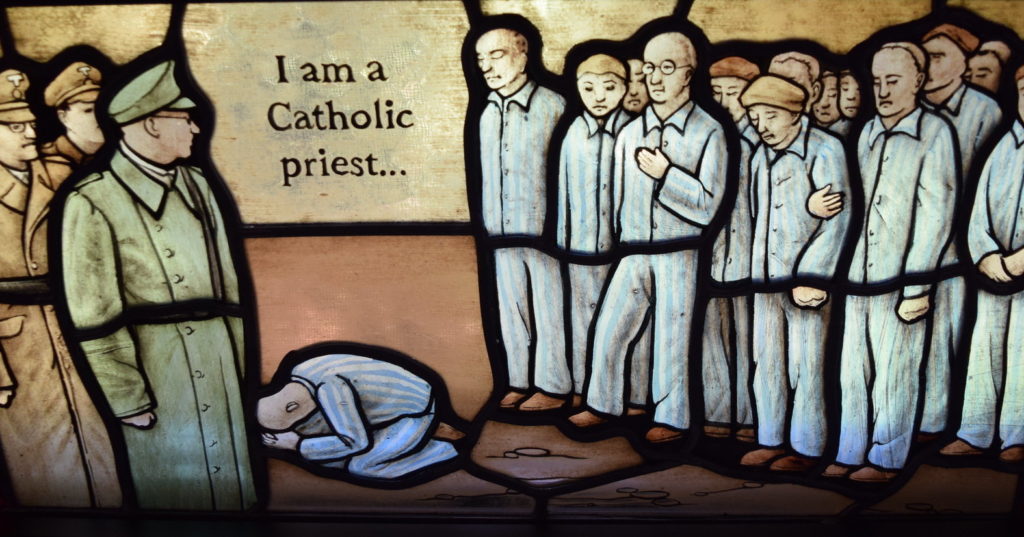 In the midst of the worst war this world has ever seen there was a Catholic priest who stood tall against the evil forces that desired to conquer the planet. He was a nobody from Poland who continued to conquer evil long after his death. He faced the greatest possible trial, but through that tribulation, he brought the example of heroic holiness to many. Fr. Maximilian Kolbe lived the gift of life to the maximum, and his witness spread like wildfire because of it.

Concentration camps stifle the mind, body, spirit, and soul of its occupants. The thought of death was awful, however, the thought of going on in the same living conditions was even worse. Fr. Kolbe desired to make every situation that he was in better and reached people by the dozens through his kindness and words of encouragement.

Until His Last Breath

Many Catholics know the details that surround the sacrifice of this priest for another inmate at Auschwitz. One day there was a man who had attempted to escape and actually made it out of the camp by climbing one of the walls. This was a rare occurrence and it aggravated the Nazis beyond belief. No one would cross them and have power over their commands. In the middle of the winter, the soldiers in charge had the whole camp line up in formation in the snow. They would make an example out of
this whole situation.

The soldiers randomly chose people to be executed. This was to show two
things. One, if you attempted to escape and did not make it, this is what would happen to you. Nazi’s were professionals at declaring that the gift of life is worthless for some.

Two, even if you did make it out of the camp you would be sentencing people back in the camp to death because of your actions.

A soldier grabbed a man next to Father Kolbe, but this man fell to the ground and began to beg the soldier to spare his life. He was screaming that he had a wife and children who were still alive and his love for them was made brutally clear. Maximilian heard this and left his spot in formation (a major crime in the camp). He marched up to the general in charge, and looked him in the eyes demanding that he allow him take the
place of this man. Along with several others, he was placed in a small room with no light and no food awaiting their slow deaths through starvation. Kolbe could be heard praying and helping others until his last breath.

The man that cried out for his family that day, who Maximilian gave his life for, was named Franciszek Gajowniczek. He survived the camp, and he was able to go back home to his family after the war. In 1971 Fr. Kolbe was beatified and one year after Kolbe’s beatification, Franciszek Gajowniczek and nearly 150,000 pilgrims went to Auschwitz on the anniversary of his beatification. The survivor of this death camp provided inspiring introductory remarks which included his first sentence:

“I want to express my thanks, for the gift of life.”

Life is a tremendous and precious gift which Fr. Kolbe lived in a dynamic manner. The characteristics that surrounded his existence were his response to the gift of life and included profound prayer, intense charity, radical trust, and an awe-inspiring hope in God’s victory. Franciszek Gajowniczek was the recipient of Fr. Kolbe’s sacrificially
driven and gift-living self. His only reaction could be gratitude and a call for others to give thanks for the gift of life they have also been given.

In 1982, Fr. Kolbe was canonized a saint. There was a Mass in Rome. The man who was saved on that cold winter day in Poland was present along with his wife, children, and grandchildren. They were placed in the front row for all to see because their very existence showed that the death of this priest was not a defeat that day in Auschwitz. Father Kolbe’s trials were tremendous and they cost him everything, but they did not have the last word; courage, sacrifice, and love are his legacy.

Let us be grateful for the gift of life, let us be on the pursuit of standing out of formation to declare to the world that the way of the Cross conquers all, and brings about an existence which the powers of evil can never overcome.

May our legacy be an ever-acute attentiveness to the gift of life we have been given, and an everlasting mission to bring that gift of love to the world, like St. Maximilian Kolbe.

High Energy at the March for Life 2020 (Slideshow)

The Selflessness of St. Maximilian Kolbe