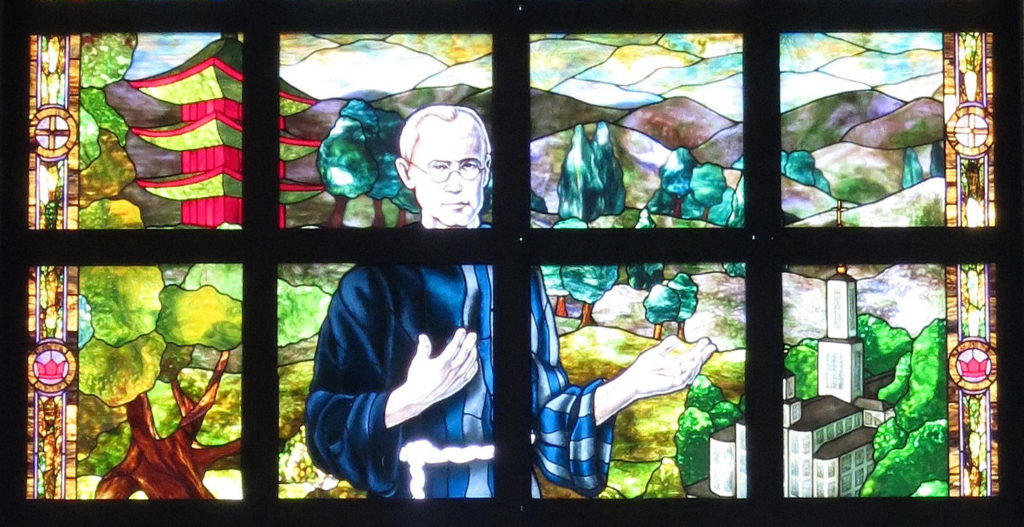 I got a Maximilian Kolbe sticker a few months ago. It depicts an old typewriter and the number 16670 typed on a sheet of paper. I didn’t know St. Maximilian Kolbe was a writer and—as a writer myself—I wanted to learn more about the Saint of Auschwitz. Like all the saints, his was an ordinary life that God made extraordinary thanks to his openness to God’s plan.

St. Maximilian Kolbe was born in January 1894 to a Catholic family in Poland. Raymond (his birth name) was a mischievous child who was probably a lot of fun to be friends with but challenging to be the parent of. A turning point in his young life came when his frustrated mother asked “Whatever will become of you?”

My own son, when I asked similarly, “What am I going to do with you?” responded “Keep me!” and scampered off to more shenanigans. Raymond took the question to heart and wondered what in fact would become of him. His family kept a statue of Mary of Czestochowa and Raymond began spending time in front of her. She came to him in a vision one day offering him two crowns: one of purity and one of martyrdom. When she asked him which he would like, he accepted both and his preparation for sainthood began.

The Road to Sainthood

At the age of sixteen he entered the Franciscan novitiate and chose Maximilian Maria as his name. As often happens when one tries to follow the Lord’s will, he suffered. His was an attack of scruples. He felt unworthy, like he needed to do more and pray more. Maximillian worried so much that everything he did was wrong, he became ill. He confided in his roommate and they pledged to pray for each other daily for the rest of their lives.

As he moved through seminary and was ordained a Franciscan, Maximilian became beloved by all. He was often cheerful and smiling. He was thoughtful and helpful, tutoring and comforting his classmates. Maximillian was a man who put others first. At his ordination April 28, 1918 he made a personal vow to honor and serve the Blessed Virgin Mary. He and six friends formed a militia called the Knights of the Immaculate dedicated to winning souls for Mary through prayer and example. The Knights still continue around the world.

Maximilian contracted tuberculosis while serving in Italy and was sent back to Poland’s drier mountain area to recover for two years. When he returned to Krakow after recovering, he wanted to start a Catholic newspaper. Because his monastery had no money he had to collect donations to get the necessary equipment. He had faith in Mary’s providence and raised enough to buy an old printing press. He was able to print five thousand copies of the paper per month.

When his tuberculosis returned he was transferred to a friary in Grodno, Poland. The friary supported the newspaper and his brother Alphonsus, also a Franciscan, joined him to help. In every issue they put an advertisement inviting men to “become a knight of Mary.” Many accepted the invitation and soon the friary was overcrowded. The obvious solution? Build a city.

A City for Mary

Maximilian approached a Polish prince who had a large amount of land to sell. The price was too high but Maximilian had faith that Mary would provide. She did provide and the prince donated the land to the friary. The friars got to work building a city dedicated to Mary. They called it Niepokalanow—Marytown, the City of the Immaculate. The city grew, as did the circulation of the newspaper. By 1937 new men were joining the friars daily and Niepokalanow was the largest friary in the world. Seven hundred men lived and worked there.

Maximilian dedicated everything to Mary. The friars spent three hours a day in prayer, meditation, and Mass. He reminded his friars:

“Our outside activities are not what matters. Whether our magazines and newspapers are a success or failure is unimportant. We could be dispersed like leaves in a summer wind, but if the ideal of love and service to God and his Blessed Mother were to grow in our hearts, then, my little children, we can say that we have seen great progress” (Maximilian Kolbe: Saint of Auschwitz, 41).

Pray for Your Enemies

Unfortunately his writing brought him to the attention of the Nazis who came to Poland in 1939. While well-loved and well-known to the Polish people, the Nazis considered his outspokenness a threat. In September 1939, the Nazis arrested him. True to his self-sacrificing character, while in prison, he shared his tiny rations with those who had less than him. Miraculously he stayed healthy despite the poor living conditions.

The Nazis released him on the Feast of the Immaculate Conception, but in February 1941 they arrested him again. In late May they sent him to Auschwitz. While being transported there, packed in a railroad box car, he comforted and prayed with the other men. Despite the hard labor, little food, and harsh climate, Maximilian tried to be a point of light for the prisoners surrounding him, offering to hear confessions and praying with others even though it was dangerous. Maximilian had faith in the goodness of God and the intercession of Mary. He prayed for the guards who abused him and encouraged others to do the same. He was even able to celebrate Mass in secret one night.

The Crown of Martyrdom

His final act of self giving came in the summer of 1941 when a prisoner from his bunker escaped. The Nazis forced all the men from Bunker 14A to stand for hours in the sun. The men were exhausted and dehydrated. The guards selected ten men at random to be put in a cell block without food or water until they died. One man begged to be spared when he was picked so he could see his wife and family. Maximilian volunteered to take his place, convincing the guard that it would be better to send a Catholic priest. The guard agreed and the men were sent into the cell block.

Even though he was ill with pneumonia, he did his best to comfort the men in the cell block with him. He led them in prayer and song. After fourteen days, he and four others were still alive. The Nazis needed the cell for another batch of prisoners, so a doctor was sent to inject them with carbolic acid. Maximilian was the only one still conscious. He smiled at the doctor as he held out his arm. He was accepting the crown of martyrdom from his dear Mary.

When I see my sticker now, I am reminded of a great man, a great writer who spoke the truth and it ended up costing him his life. But I also remember a man who cared for others, who put others first and who greeted his death with a smile, fully confident that he would be in heaven. I hope I can emulate him in my own life by valuing others before myself (not a skill that comes naturally) and by having big faith in my mother Mary.

How can you put others first in your own ordinary life? Share your ideas in the comments at the bottom of the page.