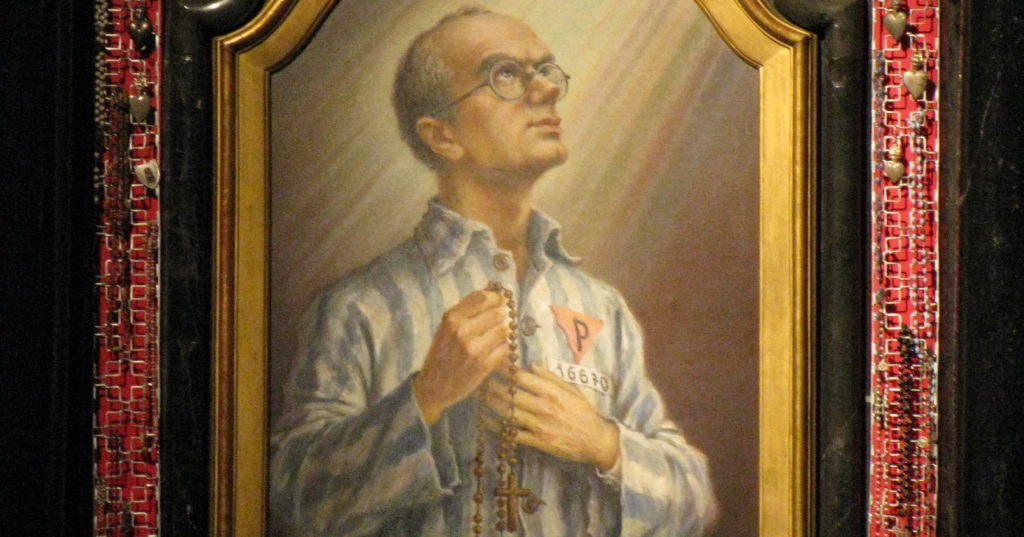 When we hear the name Maximilian Kolbe, we often immediately call to mind the heroic man who offered himself in the place of another prisoner to be put to death in the Auschwitz concentration camp. The aptly called “Martyr of Charity” showcases for us the greatest possible love described by Christ: “to lay down one’s life for one’s friends” (see John 15:13). St. Maximilian Kolbe in this act of love and virtue provides an ultimate example of what it means to love one’s neighbor as oneself and what it means to truly be a good neighbor (see Mark 12:31; Luke 10:25-37).

This self-sacrificial imitation of Christ was only the climax of a life permeated with God’s love and the powerful intercession of the Immaculata. St. Maximilian Kolbe’s final display of transformative love was a direct continuation of his entire life.

Before becoming the Martyr of Charity, Maximilian Kolbe was born Rajmund Kolbe in 1894 in Poland. As a young boy, he excelled in mathematics and science. In his free time, he would draw up strategic military plans with the ambition of defending Poland as a soldier one day.

With his elder brother, young Rajmund joined a minor seminary to complete his schooling. Although he was a bright and faithful young Catholic, his desire to serve his country never went away. The intervention of a mother would keep him in God’s service, though. When he had decided to leave the seminary to become a soldier, his mother showed up unannounced at the seminary to reaffirm his vocation to the priesthood.  These ambitions to fight for good would need to be fulfilled in some other way.

It was not only his earthly mother that had this influence on him, but in his studies, he encountered the powerful intercession of Mary Immaculate, whose name he would take in his religious name. Rajmund realized that the way to give God the greatest glory possible was through the Virgin Mary, hence he took the name Maximilian Maria.

While studying in Rome, the calling on his heart to be a soldier was to be made manifest when he witnessed horrendous freemason demonstrations filled with shouting blasphemies, images of St. Michael being trampled by Lucifer, and slanders against the pope. In response, Kolbe founded what is known as the Militia Immaculata, an army under the mantle of Mary to combat the evils of the world, the freemasons, and the enemies of the Church.

Kolbe led others to take up spiritual arms, such as the Rosary, the miraculous medal, and Marian consecration, to convert sinners and defend the Church through Mary’s powerful intercession.

Applying his understanding of science, Maximilian said that every action has an equal and opposite reaction:

If we directed our efforts towards bringing about a more perfect union with the Immaculata and us, then we would have a more perfect union with God, be transformed, and thus be able to transform others. This became Maximilian’s way to give God the greatest glory possible: he wanted to conquer the entire world, the entire universe to the Immaculata.

Kolbe was inspired by Our Lady’s words at Lourdes when she said, “I am the Immaculate Conception.”  Ultimately, it led him to understand Mary’s deep union with the Holy Spirit.  You see, by Mary taking the name “Immaculate Conception” rather than saying she was immaculately conceived, it revealed something about who she truly is. Kolbe’s response to this was to meditate on what it means to be immaculate and what it means to be a “conception.”

His answer was that truly, the Holy Spirit was the real “Immaculate Conception”, although he is uncreated. The Spirit is the flowering of the love between the Father and the Son, he is wholly Immaculate because he is perfect, and Mary becomes the Immaculate Conception by the Spirit’s action in her life. To all this, Kolbe said:

If among human beings the wife takes the name of her husband because she belongs to him, is one with him, because equal to him and is, with him, the source of new life, with how much greater reason should the name of the Holy Spirit, who is the divine Immaculate Conception, be used as the name of her in whom he lives as uncreated Love, the principle of life in the whole supernatural order of grace?

What this means for us is that Mary is so united to the Holy Spirit that we cannot even begin to grasp the depth of their relationship. But this also means that through Mary’s intercession the entire world can become more filled with the Spirit, and thus more united to Christ.

With this mentality, the Militia Immaculata then went to work in Poland to bring about the conversion of the whole world. Maximilian Kolbe invented revolutionary ways to improve the printing press (many ideas are still being used today) in order to print his magazine Knight of the Immaculata.  As knights under her command, they could engage in spiritual battle to conquer the entire world. Maximilian, the soldier for Mary, the knight of the Immaculata, led the way.

Knight of the Immaculata was dedicated to apologetics, devotions, spreading the gospel, and attacking the freemason and Nazi Germany.  It quickly became the most popular magazine in Poland, selling over two million copies.

After working diligently in Poland, St. Maximilian headed out to Japan to build a new friary and to do missionary work. He even grew out his beard as a cultural way to be more respected by those he was ministering to in Japan!

When they went to build their friary, the Immaculata told Maximilian Kolbe to build the friary out of the town behind a mountain. The friars resisted, saying they would not be close enough to the city to help those in need. Out of obedience, they listened.

Now this city was Nagasaki. When the atomic bomb came, the friary was shielded by the mountain and remained intact. St. Maximilian’s trust in Our Lady had led to their safety.

Consecration to the Immaculata

This was not the only time Mary would directly intervene in his life, though.  When he was younger, she appeared to him and asked if he would like the white crown of virginity as a priest or the red crown of martyrdom.  Maximilian humbly requested both, to which Our Lady obliged, another example of seeking God to the maximum.

After his missionary work in Japan, Kolbe returned to Niepokalanów, the city of the Immaculate, in Poland. There he tirelessly worked to bring more and more people to consecrate themselves to the Immaculata in order to love Jesus better. He left everything in her hands, just as we ought to.

Empowered by the Holy Spirit

This simple devotion to Mary, the dedication to pray the Rosary and trust in her, to listen to her words, “Do whatever he tells you” (John 2:5), can entirely transform your life. Once we have received these blessings, they are to be shared with everyone in the whole world. Maximilian Kolbe’s style of evangelization was the same as the rest of his life—to the maximum.

He utilized many platforms, he would take steps outside himself, he utilized technology (even inventing technology), and he left everything to Mary. These are examples we can follow.

There are so many technological platforms for us to spread the gospel. But no matter what we do, the best possible way will be through openness, prayer, and dedicating everything to the Immaculata.

“The more a soul becomes like the Immaculata, the more it becomes mother of Jesus in its heart, in a supernatural fashion.”

The more each of us becomes like Mary, the more our lives will bring Jesus to the world. Not only will we become transformed, but the way we live our lives, the way we impact our surroundings will be empowered by the Spirit through the intercession of his well-beloved spouse, the Immaculata.

This is the context for St. Maximilian Kolbe’s heroic actions at Auschwitz.  He was a man empowered by the Spirit and closely in love with his mother, the Immaculata. When there was a man in need, to Maximilian it was no question: offer himself.

While in the starvation bunker, Kolbe heard confessions, led the other prisoners in prayers, chants, and praises, and prepared each of them to go to their heavenly home. After three weeks, Kolbe and another prisoner were still alive, but only Kolbe was conscious.

The Gestapo officers could not even look him in the eye, because the amount of love they saw in his gaze toward them was penetrating and painful. They went to administer a lethal injection. The first was not enough to take Kolbe’s life. When they came to administer the second, he held up his arm to them, looked them in the eyes, and spoke his final words, “Ave Maria.”

The Fire of Love

The life and death of St. Maximilian Kolbe are truly inspiring, but what is more inspiring is that his life is a testimony to the power of Mary’s intercession in our own lives. Kolbe shows us that if we seek to give God the greatest glory and rely on the best possible help, which is the Virgin Mary, she will lead us to do great things in Christ.

Our lives can look like St. Maximilian Kolbe’s. Mary needs more knights.  If you echo her “fiat” and say yes, she will lead you to crush the head of the serpent in your life and in the whole world.

We see that Maximilian Maria Kolbe lived up to his name, giving God the maximum glory through Mary.  We can do the same—through the Rosary, Marian consecration, the miraculous medal, and even by joining the Militia Immaculata, which still exists today! Let us unite together under Mary’s maternal mantle of prayer and love to strive for holiness, to fight against the enemies of the Church, and grow toward sainthood.

Why We Named Our Son Kolbe

Consecration to Jesus through Mary

Joshua Mazrin is a graduate of Franciscan University of Steubenville with a bachelor’s and master’s degree in theology. He is currently working on a PhD in systematic theology at Ave Maria University. He also serves as Director of Evangelization for the Catholic Diocese of Venice in Florida and is a member of the Catholic Speakers Organization.