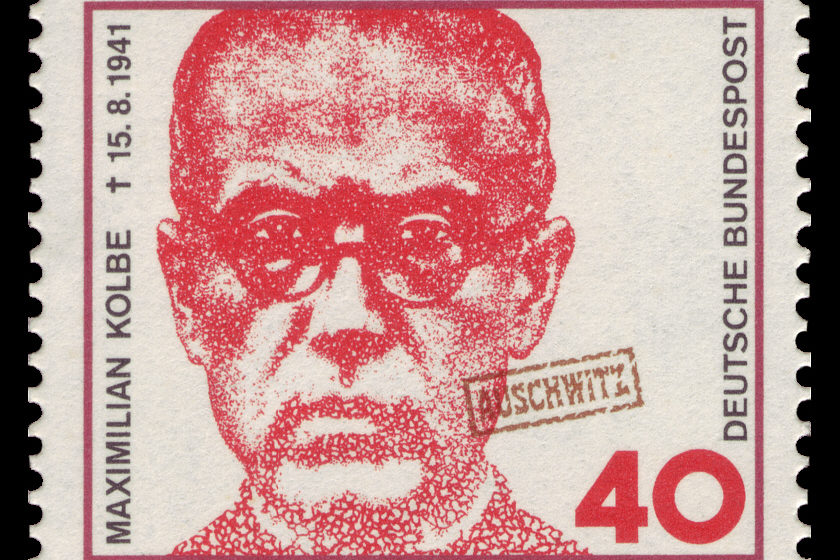 Maximillian Kolbe was quite simply an extraordinary human being. Born in 1894, he excelled early on in math and science—and would maintain a keen interest in technology all his life. By the age of twenty-five, he held doctorates in both philosophy and theology. In 1927, he founded the Franciscan friary, Niepokalanow—Polish for “Mary’s City.” Before World War II, this friary had a radio station, made extensive use of the printing press in order to promulgate Catholic literature, and had preparations ready for television. Kolbe sought to live in poverty, but spared no expense when it came to the use of technology for passing on the faith.

The same was true during his missionary tour in Japan from 1930-1936. Kolbe learned to speak Japanese and even found translators for his Catholic publications. The bishop of Nagasaki had offered to sell him a vacant seminary, but Kolbe declined, saying: “It is better to invest in publications than buildings” (cited in A Man for Others, Patricia Treece, 63). Instead, Kolbe bought very cheap, hilly land—which made it exceedingly difficult to clear in order to build their structure. In a strange twist of fate, his building—tucked behind a series of hills—was unaffected by the atomic bomb of 1945. Kolbe’s friars, who had remained in Japan, then made permanent quarters for one thousand Japanese children (ibid.). Kolbe had to return previously to Poland because of his tuberculosis, which he had suffered since he was a young man.

A key moment for young Maximillian—then Raymond—came as a boy: Mary appeared to him and offered him two crowns, one white and the other red (standing for “purity” and “martyrdom,” respectively). Asked which one he would like, the future saint responded like any eager youngster: “yes!” He wanted both—and Mary would be his constant guide from that day forth, leading him into union with Jesus.

On February 17, 1941, Kolbe was arrested by the Germans and taken to Pawiak, and then later to Auschwitz—a similar fate would await one third of all Polish clergy. At Auschwitz, Kolbe became #16,670. Survivors took note of his serenity, as he accepted his suffering. Here is the witness of one harrowing moment for Kolbe:

“The bloody capo [often spelled “kapo,” prisoners appointed by the Nazis to oversee the forced labor of other prisoners] selected him to be the day’s special victim and tortured him as a bird of prey …. [They] loaded Father Maximilian’s back with the heaviest branches, then ordered him to run. When the priest fell, [they] kicked him mercilessly in the face and stomach, shouting, ‘You don’t want to work, you drone! I’ll show you what work means’ …. [They] ordered Kolbe to lie across a stump. Then from among the guards [they] summoned the strongest and ordered them to give the innocent priest fifty lashes” (ibid., 180).

Witnesses describe Kolbe’s aftermath this way: “Afterwards Father Kolbe couldn’t even move …. His attitude in the face of suffering was a marvel …. He conducted himself with virility and with complete acceptance of the will of God. He often said, ‘For Jesus Christ I’m ready to suffer more than this. The Immaculata is helping me’” (ibid., 181).

Other witnesses relate: “I recall his saying, ‘I don’t fear death; I fear sin.’ He kept encouraging us not to be afraid of dying, but to have at heart the salvation of our souls. He said that if we feared nothing but sin, prayed to Christ, and sought the intercession of Mary, we would know peace” (ibid., 190).

Already physiologically frail from tuberculosis, Kolbe was known for giving away some of his food rations (see ibid., 205). While his martyrdom in Auschwitz is witness enough, anecdotes like these help us realize how he ministered physically and spiritually to others before he died, raising their spirits and lifting their eyes to heaven.

Eventually, a prisoner escaped and the German reprisal was the execution of ten prisoners. A certain Francis Gajowniczek was chosen among these ten, at which point Gajowniczek cried out: “My wife and my children.” Kolbe stepped forward, saying, “I want to die in place of this prisoner,” pointing at Gajowniczek.

Noting how unusual it was for a prisoner even to step out of line, let alone speak, Kolbe’s biographer writes: “He [Kolbe] presents this audacious request without a stammer. Fritsch [the German overseer] looks stupefied, irritated. Everyone notes how the German lord of life and death, suddenly nervous, actually steps back a pace” (ibid., 223).

Gajowniczek later reflected: “I could only try to thank him with my eyes. I was stunned and could hardly grasp what was going on. The immensity of it: I, the condemned, am to live and someone else willingly and voluntarily offers his life for me—a stranger. Is this some dream or reality?” (cited in ibid., 224).

Amazingly, the prisoner-interpreter who witnessed Kolbe’s last days, Bruno Borgowiec, survived; and in fact, he died in 1947 at the age of forty. But before he died, he provided sworn testimony regarding Kolbe’s final days.

Kolbe’s biographer relates: “In spite of thousands having died in that bunker, [Borgowiec] remembered even such isolated details about Father Kolbe’s last days ‘with absolute clarity’, he maintained, ‘because of the absolutely extraordinary behavior with which the noble Father faced death’” (ibid., 226).

Borgowiec recounts how Kolbe frequently led his fellow prisoners in prayer, Rosary, and hymns. Apparently, this even made an impression on the Nazi officers: “I overheard the SS [Nazi officers] talking about him among themselves. They were admiring his courage and behavior. One of them said, ‘We’ve never had a priest here like this one. He must be a wholly exceptional man’” (cited in ibid., 229).

Speaking of Kolbe’s final days, Borgowiec observes: “What kind of martyrdom these men were enduring can be imagined from the fact that the urine bucket was always dry. In their dreadful thirst, they must have drunk its contents” (cited in ibid.).

Two weeks of starvation went by, with most of the prisoners having died off. Only four remained, one of whom was Maximillian Kolbe. Annoyed at how long things were taking, the SS sought to finish off these final four with injections of carbolic acid.

According to Borgowiec, Kolbe’s serenity continued through his final moments: “I saw Father Kolbe, with a prayer, himself hold out his arm to the executioner” (cited in ibid., 228).

Kolbe died on August 14, 1941; and in a bit of cruel irony, he was cremated on August 15—the very day on which the Church celebrates the Assumption of Mary, body and soul into heaven.

The man Kolbe saved, Francis Gajowniczek, lived to see (and was present for) Kolbe’s beatification in 1971 and canonization in 1982.

And when John Paul II made his first papal visit to Poland in 1979 and visited Auschwitz—after praying and kissing the floor where Kolbe died—he met and embraced the seventy-eight-year-old Francis Gajowniczek, whose life Kolbe had saved so long ago.

Kolbe’s interior peace and unfailing confidence in the mystery of divine providence can only be explained by his deep and living faith: Kolbe knew the living God and our Blessed Mother in a personal and intimate way. And this gave him the ability to see things as they truly are: sin is a far worse tragedy than death.

How can we remind ourselves of this great truth and how might it reorient our lives this very day?

Living on a Wing and a Prayer