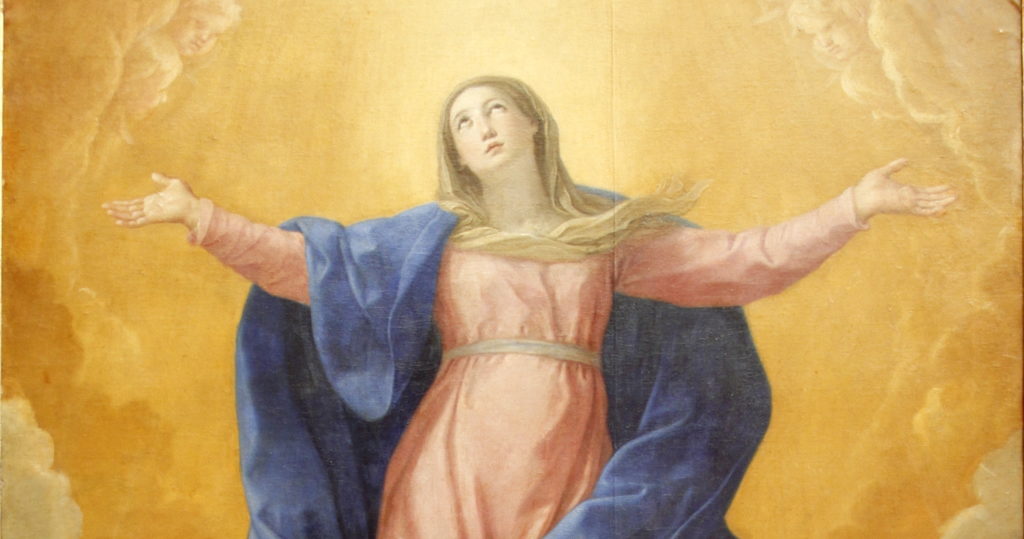 Every year on August 15 we celebrate the Solemnity of the Assumption of Mary, body and soul into heaven. While Catholic belief in the Assumption stretches back to the dawn of Christian history, it was dogmatically defined fairly recently, in 1950, by Pope Pius XII in the apostolic constitution Munificentissumus Deus.

Pope Pius’ definition leaves open the question of whether Mary merely fell asleep or died and was immediately taken up into heaven, but clearly states that Mary was spared from the usual separation of body and soul. She, with Christ, already enjoys the full measure of body/soul resurrection that awaits all of the redeemed on the last day.

Every year, unless it falls on a weekend, the Assumption is the first liturgy of the school year.  As campus minister in a Catholic highschool, I take a few minutes to focus our students before Mass, and every year I find myself emphasizing the same three points to frame the Assumption.

1. Mary’s assumption reaffirms the goodness, meaning, and destiny of the body.

Our images and hopes of heaven tend to be pretty weak. When we think about heaven, if we do, we might imagine that it is purely spiritual or that it is some vague experience of bliss in the clouds. I would wager to say that in modernity we think of it hardly at all. The dogma of the Assumption reminds us that we believe in the resurrection of the body and in a heaven that is a face to face encounter with God:

“Beloved, we are God’s children now; it does not yet appear what we shall be, but we know that when he appears we shall be like him, for we shall see him as he is” (1 John 3:2).

“For now we see in a mirror dimly, but then face to face. Now I know in part; then I shall understand fully, even as I have been fully understood.” (1 Corinthians 13:12).

Mary, assumed body and soul into heaven, has a face, a fully human and fully realized face with which she looks into the eyes of God. Mary, assumed body and soul into heaven, did not become an angel, but rather the fully human, body and soul, queen of heaven. She, with Christ, prepares a place in heaven that is the ultimate destiny of all the faithful. The Assumption should cause us to wonder about this. What does it mean that heaven is a body and soul reality? What does this mean for our bodies now? There is so much to wonder when we pause and take this all in.

It is important to point out that an uncatholic dualism, the notion that we are essentially souls trapped in bodies who are freed only by death, is hard wired into us. (I’m looking at you, Plato.) There are many practical implications to a body/soul dualism. We might see the body as merely instrumental and bodily things as split from spiritual things. Mary’s assumption points us toward a robust sacramentality; the idea that the body, here and now, is an effective and sensible sign that points beyond itself, to heaven. What we see, hear, touch, taste and smell can and should communicate to us about God and the true destiny of our humanity.

Think about the earthly life of Mary and about the gritty bodily reality of life in Nazareth. Mary, like Jesus, toiled, sweated, touched, ate, drank, and rested in real time and space. She lived her day to day life in perfect harmony with God’s will and was a perfect sign of things to come, a sign that pointed beyond herself. Now, in heaven, she lives out the bodily destiny that awaits us all. Think about that! It is hard for us to wrap our minds around what it might fully mean. There are questions of time and space and it is a bit like a seed imagining a tree, but, sitting at the feet of Mary in her school of heavenly imagination, ponder away!

2. Mary’s assumption reaffirms the dignity of womanhood and that femaleness (or maleness) is intrinsic to our identity.

Mary’s body and soul assumption into heaven is a great affirmation of the dignity of all womanhood. We don’t suppose for a second that she, in any way, lost her femininity as she entered into heaven. We call her New Eve, Queen of Heaven, Virgin, Mother, Spouse of the Spirit, and literally hundreds of other feminine titles. She shines as an icon of the genuine empowerment, liberation, and fulfillment of womanhood.

In an age where there is so much turmoil, pain, strife, and confusion about sex and gender, Mary reveals the shining fulfillment for the original plan, “male and female he created them” (Genesis 1:27). With her fiat, her free, confident, and empowered yes to God’s will, she opens herself to God’s life and shines brightly the flame of love that can only be expressed by the feminine genius. This was true of her earthly life and is true also, even more profoundly, of her heavenly life.

Mary’s womanhood is beyond stereotype, construct, or caricature. Getting to know her is a way forward in confusing times. In relationship with her, the Undoer of Knots, there can be an untangling of the heart of womanhood. In relationship with her, there can be healing and discovery for the hearts of both men and women whose sense of identity and bodily integrity have been wounded. I often find myself thinking about this at this particular feast.

3. Mary’s assumption is a preview of coming attractions.

Finally, Mary’s body and soul assumption is a preview and first installment of our heavenly destiny. We will also be resurrected … body and soul. We will not be angels in eternity, but fully realized male and female human beings. The corruption, shame, and limitation of bodily life will be healed. We will see God face to face because, like Mary, we will have faces.

As we go about our day to day life, this perspective changes things. If we soak in this realization, especially if we do so with devotion to and in relationship with Mary, we might just become saints. We might just open our eyes to the deeper reality of daily tasks and especially to the great dignity of every person we encounter. Mary is the Star of the Sea, a lighthouse, beaconing all of us to the shores of a promised eternal home for humanity.

Does Mary’s assumption bring certain spiritual realities closer to you as well? Which ones? In what ways? Let us know in the comments at the bottom of the page.

Mary, assumed body and soul into heaven, pray for us!

Mary: A Biblical Walk with the Blessed Mother (study program)

How Mary’s Assumption Is Rooted in Tradition & Scripture

The Assumption of Mary: A Sign of Good Things to Come

Featured painting, “The Assumption of the Virgin Mary” (1638-39) by Guido Reni from Wikimedia Commons