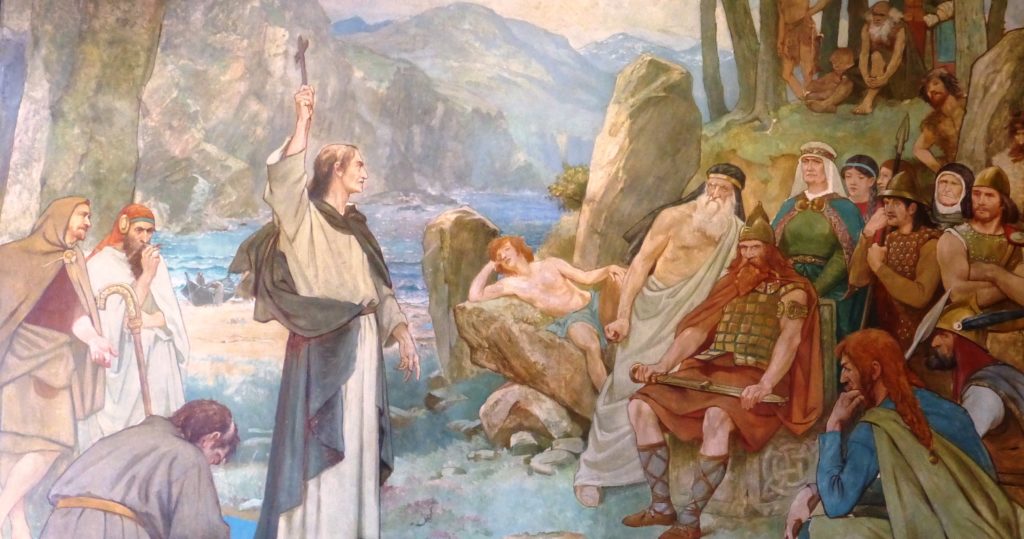 While St. Patrick is Ireland’s most famous saint, there are many other holy Irish men and women we should all remember. Here are a few soul friends from the Isle of Saints for you to enjoy.

St. Brendan was born in County Kerry in around 485. He was educated by saints, including St. Ita and St. Jarlath. He became a monk-priest in 512.

At first, Brendan contented himself with evangelizing Ireland. He founded many monasteries, including Clonfert, which eventually had three thousand monks. He eventually realized that his missionary powers couldn’t be contained by a single island, even if that island is arguably the best in the world (I might be biased). He did a three-year mission to Wales, Iona (an island off the coast of Scotland), and other bits of the modern-day United Kingdom.

His most famous journey lasted seven years. Like many old saint stories, it’s difficult to tell what actually happened and what was a pious (or not so pious) fantasy, as writers in this time period bravely refused to let the truth get in the way of a good story. We do know that while St. Brendan was alive, Christianity was growing in Ireland and Irish missionaries were beginning to evangelize Europe. It’s reasonable to assume that some of the accounts of St. Brendan’s sea voyage actually happened. However, many events in The Wandering of St. Brendan are definitely false. For example, historians agree that he probably didn’t land on an island that turned out to be a sea monster.

According to the legend, an old monk told Brendan that he (the monk) had just returned from Paradise. Despite being a nonagenarian, Brendan retreated to an especially craggy cliff in southwest Ireland and prayed for forty days. Then he gathered somewhere between eighteen and 150 monks and set sail in a wicker boat.

As the legend goes, they made it to the Canary Islands, and possibly even as far as the Americas. Some historians argue that Leif Erickson and Christopher Colombus used tales of St. Brendan’s journey in their own explorations.

Whatever the truth is, we know that the story of St. Brendan’s travels were treated like a Celtic version of The Odyssey. They inspired generations of Irish Catholics to spread their faith to Europe and later, North America.

Columba was born to royal parents in County Donegal in the sixth century, right around the time Irish monasticism was growing in popularity.

Irish monasticism was different from its counterpart in Europe in a few ways. First, the Irish had many hermits, whereas hermits on the continent were mostly absorbed by monasteries at this time. Second, the Irish monasteries were quite austere. Common practices included submerging oneself in cold water for hours, kneeling on stone with arms outstretched in a cruciform position for hours, and a somehow even uglier version of the tonsure. Finally, the diocesan system didn’t make sense in Ireland, because Irish society was divided into semi-nomadic tribes. So in Ireland, monasteries were the basic unit of the church. A single monastery could have thousands of dependents, each of whom would view themself as a sort of family member of the monastery’s patron saint.

This system was coming into its own when Columba was born in 521. He was lucky to study under several men now regarded as saints, the first of whom was St. Finian, another famous Irish saint.

Columba was ordained when he was twenty-five. He was a disciple of St. Mobhí for a while and seemed to regard Mobhí as his spiritual father. Unfortunately, Mobhí’s school was closed by the plague in 544, and eventually killed its founder.

Columba traveled the country founding monasteries. Then he and St. Finnian got into a huge fight over a copy of a book Columba had made. This fight somehow escalated into a clan war in which three thousand people died. Columba was censured by a synod and left Ireland in disgrace.

What I love about Columba is that he didn’t drown in his shame. He repented and went on to do great things for the Church. He settled in Iona with twelve other monks. The monastery they founded became the center of Celtic Christian culture. One legend claims he even fought the Loch Ness Monster (see my above notes about the veracity of saintly lore in this time period). He spent the rest of his life converting people, attending synods, and defending Celtic Christianity. The monks he trained evangelized Europe.

St. Darerca is featured in several obscure old manuscripts about which historians like to write contradictory essays. Most agree that she was St. Patricks’ sister and most likely one of the best mothers in the history of Christendom. She had somewhere between twelve or nineteen children, most of whom are saints, many of whom were founding bishops and nuns of Ireland, and a few who were neither, which had to be a bit awkward.

We don’t know much about her, but we know that she raised more saints than perhaps any other parent in the history of Christendom. That’s worth remembering.

Even though we’re not sure if St. Dymphna was Irish or English, most holy cards describe her as Irish, so we’ll go with it. I also think she’s important to talk about in the age of heightened mental health and sexual assault awareness. Be warned, her story is a bit triggering. And horrifying. And beautiful. And weird.

Dymphna was the daughter of a Celtic chieftain or king in the seventh century. She was a beautiful, pious girl who took after her mother. She took a vow of chastity at the age of fourteen.

After her mother’s death, her father’s mental health began to deteriorate. He missed his wife terribly. Unfortunately, Dymphna looked extraordinarily like her mother. Her father began to make sexual advances upon her. His counselors encouraged his madness and suggested he marry his daughter.

This was messed up even by seventh century standards, so Dymphna and her confessor, St. Gerebernus, left for Antwerp. They began a life as hermits outside Amsterdam. Unfortunately, Dymphna’s father found them. His soldiers murdered Gerebernus and two companions and demanded that Dymphna return with them. They beheaded her when she refused.

In the seventh century, the remains of four martyrs were found near Amsterdam, near the spot where Dymphna and the rest were reported to have been martyred. People immediately began to report miracles among people suffering from insanity, possession, and epilepsy. Someone built an asylum on the spot, and there are rumors that Van Gogh’s father tried to get him to visit.

Do you know any other great stories of Irish saints or other great Irish Catholic legends? Share them in the comments below.