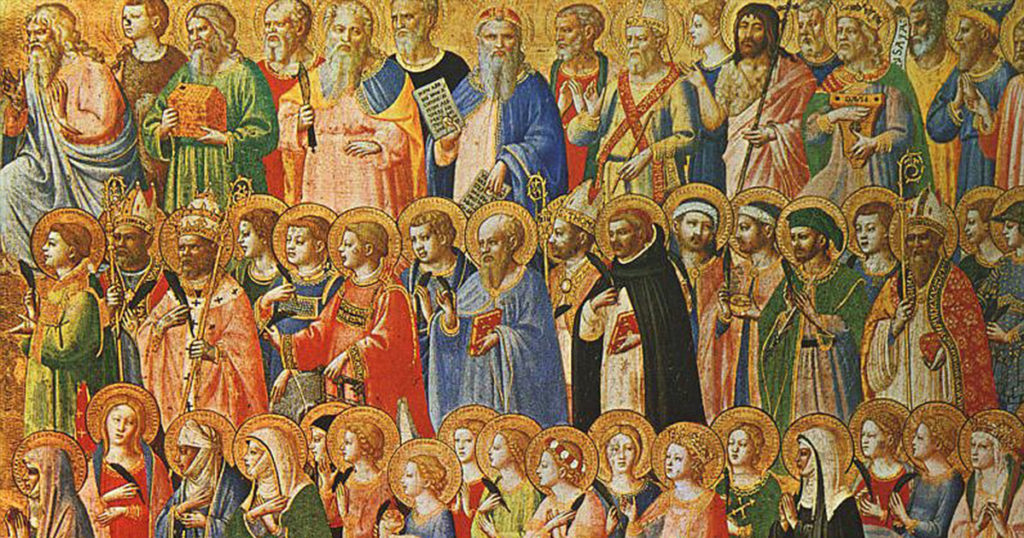 He was eight years old and dragging a life-size cross down the aisle toward the front of the church. Like Christ, he had to stop a couple times to rest. He was St. Peter and it was All Saints Day. Each year the second graders at our Catholic school research a saint and at school Mass on November 1, dress in costume and process in ahead of the priest. Assembled in front of the altar they remind those of us in the pews of the ever-important, but often forgotten, communion of saints.

Two of my own kids selected saints they were named after. Joseph dressed up in a “robe” fashioned from a brown pillowcase and carried a t-square. Katherine, after a brief negotiation with another mom over the various Katherines, settled on Catherine of Alexandria and carried a Bible to signify her saint’s extraordinary faith. The final child eschewed his name saint and instead looked for a saint who carried a sword. It seems carrying something is a big deal when you’re eight. Despite my reminder that a sword would not be allowed at school or church, he persisted and became smitten with St. Martin of Tours.

All Saints Day is sandwiched between the decidedly non-religious—but kid-friendly—Halloween and the more religious All Soul’s Day. As we come down from our sugar high, it’s easy to forget about this special feast day where we celebrate the saints we both know and don’t know and remember that they are an army of intercessors for us while we are here on earth traveling our way toward holiness and heaven.

How the Saints Can Help Us

By virtue of our baptism, all of us are called to be saints, yet that can seem difficult to attain. Saints are spiritual superheroes. They were oftentimes extraordinary people in extraordinary situations. St. Maximilian Kolbe offered himself in place of a prisoner in Auschwitz and starved to death. St. Mother Teresa tended to the sick and dying on the streets of Calcutta. St. Joan of Arc led the French army to victory at the age of eighteen. It’s a safe bet I won’t be in a concentration camp in my lifetime, nor am I able to minister to the poorest of the poor and no army in the world would let me lead it.  I try to pray but I’m not nearly as good at it as St. Thérèse of Lisieux or St. Faustina Kowalska. I’d like to think I’d speak out and risk my life like the recently-canonized St. Oscar Romero but it’s unlikely I will be in that situation.

The saints are models for us. Many of them were holy from the start and they are inspiring. I want to be a prayer warrior. I want a heart full of love. I want to be better than I am. But when I compare myself to them—and yes, comparison is a thief—I see how I fall short. That’s why this lovely little book gives me hope: Saints Behaving Badly by Thomas J. Craughwell.

In this book, we are reminded that saints are people just like us. I forget that sometimes. They are people who opened their hearts and lives to God. They recognized that they belong to him. We can do that too. Jesus was divine and human; saints are all human. We can never be perfect like Jesus. Our job is to try and the saints can help us.

Many of the more well-known saints started out questionably. St. Matthew was a tax collector. Tax collectors were notorious for cheating those they were collecting from and keeping the extra money for themselves. There was good reason everyone hated them. St. Augustine had a child out of wedlock and was a heretic. Thanks be to God for his amazing mother, St. Monica, who prayed for him endlessly. St. Patrick committed a sin so awful that he was almost stripped of his position as bishop. St. Francis partied, spent a lot of money and caroused. St. Ignatius was vain, got in fights and chased women.

St. Olga murdered thousands but later helped bring Christianity to what is now Russia. Sadly, her own family didn’t follow. Her grandson, St. Vladimir, murdered his brother, kept a harem, and sacrificed humans. Eventually he converted and built churches and helped the poor, sick, and homeless. There is hope!

Our God is merciful and the saints, who have “been there, done that” will pray for us. We can ask their intercession in deepening our faith and also with some of the practical things in life. Who hasn’t implored the help of St. Anthony while frantically looking for lost car keys? “Tony, Tony look around. Something’s lost and can’t be found.”

Patrons of So Many Things

We know that St. Jude is the patron of difficult situations, St. Joseph is the patron of workers, St. Luke of doctors; but I bet there are many other patrons of things (some very obscure) that you didn’t know about.

The communion of saints is a rich trove of intercessors ready to help us.  Below are some saints that you may be likely to call upon, as well as some that are unlikely but it’s good to know they are there just in case.

This year, on All Saints Day, let’s remember the men and women who either did extraordinary things or did ordinary things with great love and faith. Let’s turn to them for assistance and let’s thank them for their example.

All you holy men and women, pray for us!

Merridith Frediani’s perfect day includes prayer, writing, unrushed morning coffee, reading, tending to dahlias and playing Sheepshead with her husband and three teenagers.  She loves leading small faith groups for moms and looking for God in the silly and ordinary. She blogs and writes for her local Catholic Herald in Milwaukee.