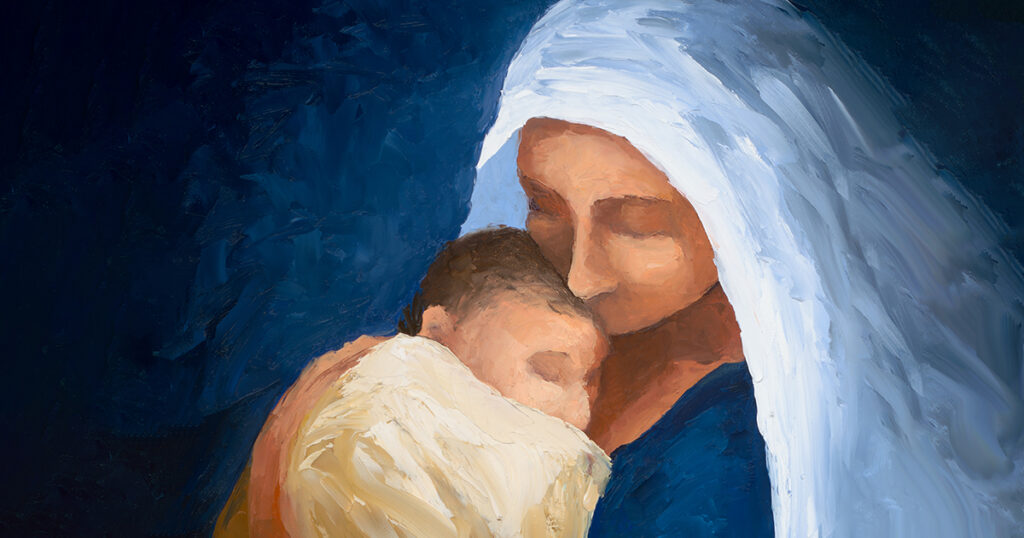 It is a fitting time to reflect on what it was like for Mary to contemplate the great mystery of her title as the Mother of God as she looked upon her son, savior, and God in the manger during the Nativity.

We do not know if Mary knew all the things Jesus would do, but it is lovely to reflect on the progression of baby to Savior. If I had an audience with her, the question I would ask is how she found the strength to trust God so fully. What he asked of her was radical and unprecedented. At a young age she assented to a plan that would change the trajectory of her life and from which there was no going back. God gave her some amazing grace.

I remember being nine months pregnant. I remember how uncomfortable and cranky I felt. I was impatient to meet my new little one and ready to feel “normal” again. I slept in a bed each night though. When I went somewhere I used a car, not a donkey, and when the time arrived for my child’s birth, I was in a hospital surrounded by medical professionals, not animals. I was still scared.

Mary delivered her son alone with Joseph in a facility with questionable cleanliness. We do not know how she felt; we only know that she did it because that is how God ordained it. I imagine her fear and uncertainty. She was far from home and her own mother. In those days, women labored in the company of other women who assisted in the birth process. Mary had only some barn animals to keep her company in addition to her husband.

I imagine her great elation when she saw Jesus’ face, held his tiny fingers, and touched his newborn baby belly. The love must have exploded in her heart. She knew he was God’s son so not only was she gazing at her child she was gazing at God himself.

I imagine her awe of the little miracle of a baby. I picture her face when she met the person she carried inside her body for nine months. I see her caress his arms as he wraps his hand around her finger. When I envision Jesus as a baby, it makes his humanity more real. I love imagining her performing the daily duties of mothering. He relied on Mary to care for him, feed him, change him, swaddle him, and hold him near her heart. Mary was given a great honor when she became Jesus’ mother. She tended to him in a way no one else ever has.

For Mary, the Nativity was not a beginning as much as it was a fulfillment of God’s promise. For the rest of us, his birth was the beginning of our salvation. When Mary delivered Jesus it was the start of her hands-on motherhood helping prepare Jesus for his earthly mission, but it was also the realization of God’s promise that she will conceive by the Holy Spirit and bear his son. Her job was far from over, but the beginning had ended. She had to give her son to the world because he belonged to the world too, not just her. The rest of us get to keep our kids.

I imagine her joy, awe, and deep gratitude. I know from Scripture that she took all of it seriously. She pondered in her heart. I know she was his first disciple. I know she was with him when he started his public ministry at the wedding at Cana. I also know that she was with him right up to the end and, at the foot of the Cross, when he asked her to be our mother too, she agreed.

I hope one day to have tea with Mary in heaven. I suspect she is more of a tea drinker than coffee drinker. I am hoping there will be crustless sandwiches too. I hope to absorb her peace and contentment. Until then I will turn to her daily as my spiritual mother and ask her to keep interceding for me, my family, and friends. I will ask her to keep us safe in her mantle and to give me the strength to be a warrior like she is and to trust God’s plan, even if it seems impossible.

What do you imagine the Nativity was like for Mary?

Mary’s May Crowning: Part 3, the Nativity

Struggling to View Mary as Your Mother? (feat. Lisa Cotter)

Mary’s Virginity and The Chosen Christmas