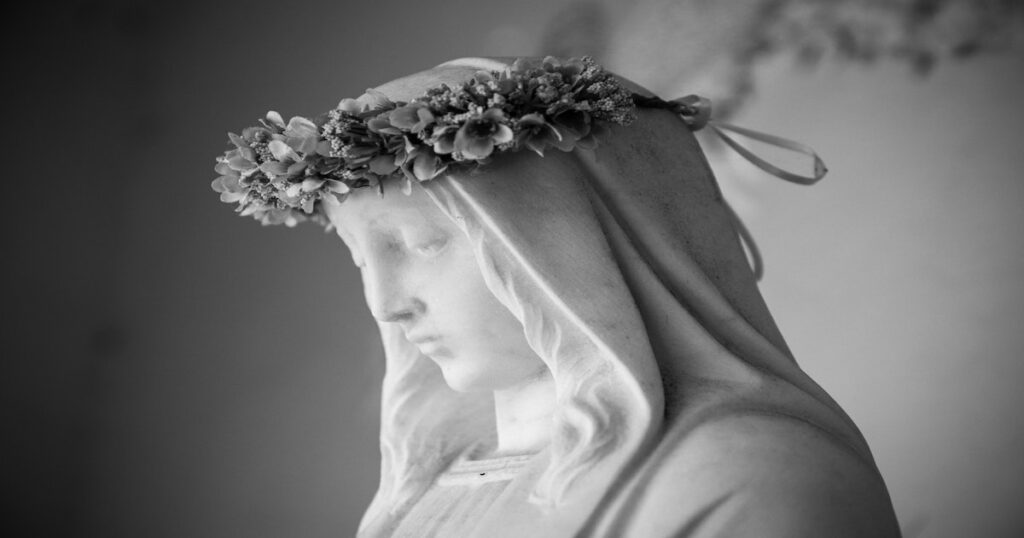 The Chosen – the still new multi-season TV series on the Gospels – has once again broken records, this time through a release of a Christmas special in theaters at the beginning of the month. But now some Catholics are saying they are no longer going to watch the show.

At the heart of the controversy is the episode’s depiction of Mary experiencing labor pains. Should Catholics stop watching? What do we believe about Mary and the birth of Christ?

As a father of six, always looking for ways to help my kids connect with Christ, I’ve been pleased overall with the show, as I explained in my initial review for Ascension.

But I have registered a concern that the evangelical focus on human experience can at times skew the portrayal in an egalitarian direction, as I noted in an interview with the Director for Angelus News. So, I can see how some might find the show jarring in the way it renders the Gospels.

For Catholic viewers, there are two major issues in the Christmas special’s portrayal of the birth of Christ. The first concerns the dogma of the Immaculate Conception of Mary, which teaches that Mary was preserved from Original Sin and therefore would not be subject to the curse of Genesis 3:16 which states women will experience pain in childbirth.

The dogma was declared in by Pope Pius IX in 1854 in an Apostolic Constitution entitled Ineffabilis Deus. But it has long been said, including in ecumenical councils of the Church, that Mary was “without blemish.” For example, at the Second Council of Nicaea, which addressed the question of whether or not iconography was idolatry, the Council Fathers asserted that:

“Along with these synods, we also confess the two natures of the one who became incarnate for our sake from the God-bearer without blemish, Mary the ever-virgin, recognizing that he is perfect God and perfect man, as the synod at Chalcedon also proclaimed, when it drove from the divine precinct the foul-mouthed Eutyches and Dioscorus.“

Other examples can be found in Ineffabilis Deus, which rehearses the tradition of belief about Mary’s immaculate conception.

When the Catholic Church identifies a dogma, it asserts that the claim was divinely revealed. Ineffabilis Deus shows that both Sacred Scripture and Sacred Tradition give witness to Mary’s Immaculate Conception.

Biblically, there are two main evidences. The first is the Annunciation recorded in Luke 1:26-38, in which the Angel Gabriel declares that Mary is “full of grace.” Catholics have traditionally understood this acclamation to mean that Mary was in a perfect state of grace, something that would point to her being preserved from Original Sin.

The second is the comparison of Mary with Eve, which happens in the Gospel of John. When Jesus refers to His Mother as “woman,” the Church has heard in this, not a rebuke of His Mother, but an echo of Genesis 2 when Adam refers to Eve as “woman.” If Mary is the New Eve, then she must be greater than the former Eve, who was herself created without sin.

There is a lot more to this dogma, and I encourage readers to pick up the great study by Ascension press, Mary: A Biblical Walk with the Blessed Mother.

The second issue with the Christmas special concerns Mary’s virginity. Traditionally, Catholics have maintained that Mary is a virgin before, during, and after the birth of Christ.

Here, the difference between Catholics and Protestants is more subtle. Evangelicals do believe that Mary conceived Jesus as a Virgin. But they do not hold the Catholic view that Mary remained a virgin both during the birth of Christ and for the rest of her life.

Brant Pitre gives a great explanation of why the reference to Jesus’ “brothers” does not indicate that Mary had other children. I think if Protestants heard this evidence, they would be more sympathetic to the Catholic claim that Mary remained a virgin after the birth of Christ.

In a recent book on the subject, entitled Vessel of Honor, Father Brian Graebe shows that belief in the virginity of Mary during the birth of Christ received “universal witness” in the early Church and was almost unanimously held until the twentieth century when the Austrian theologian Albert Mitterer attempted to “update” the Catholic view in light of modern biology.

Mitterer believed that Mary should have experienced a “natural” human birth just like every other human mother, which includes certain physical alterations that would Mary’s body would no longer give evidence of virginity. The Chosen seems sympathetic to Mitterer’s sensibility, for its stated aim is to make the events and characters of the Gospels relatable to us today by portraying their experiences as similar to our own.

What does the Church ask of us? Should we embrace The Chosen’s modernization of the Gospel or should we cherish the witness of our spiritual ancestors who handed on to us the believe that Mary remained a virgin during Christ’s birth?

Thankfully, the Church has made this clear. Mitterer’s work, embraced by those who wanted to modernize Church doctrine, set off a debate that led to the Vatican intervening and eventually to the subject being addressed at the Second Vatican Council.

In the Dogmatic Constitution Lumen Gentium (“Light of the World”), the Council reasserted the traditional view that Mary remained physically a virgin during the birth of Christ, declaring that the union between Christ and His Mother was “manifest also at the birth of Our Lord, who did not diminish His mother’s virginal integrity but sanctified it” (paragraph 57).

Fr. Graebe explains the reason why the Church has insisted on this admittedly strange belief that Mary remained a virgin during the birth of Christ. On the one hand, it concerns the way the Church has interpreted the Scriptures on the holiness of Christ’s birth.

Luke 1:35, for example, describes Jesus’ birth as a “holy birth.” Some have read the holiness of Christ’s birth in terms of the Old Testament purity laws, meaning that it would not have caused Mary to become unclean through blood.

Another Scriptural evidence is found in John 1:13, which says Jesus was born “not of blood.” Despite our English translation, which attempts to smooth over the grammatical awkwardness, the original Greek has “blood” in the plural, and thus the passage should be translated “not of bloods.” This is a weird phrasing. But scholars have suggested that “bloods” is common way of referring to the loss of blood and fluid during childbirth in the Old Testament and Jewish tradition.

Fr. Graebe explains that while in the Old Testament, “the blood from childbirth rendered a woman ritually unclean…a miraculous birth, one that spared Mary the pains and bloodshed that accompany natural birth, would have kept her ritually clean according to Mosaic law” (Vessel of Honor, 114).

Ultimately, the reason for the connection between Mary’s physical virginity and her spiritual immaculateness is the Church’s view of the inseparable unity between body and soul. Mary’s physicality should not be understood apart from her purity. The Church believes that God preserved Mary in childbirth because her body is a sign of the reality of divine salvation as it came to and through her.

Should Catholics Continue to Watch The Chosen?

For my part, I think the shows good far outweighs the concerning. Dallas Jenkins, the shows Director, is an evangelical. He has expressed a great desire to be careful and respectful when it comes to the show’s depiction of Mary. But he has also admitted that he was ignorant of the Catholic understanding of the nature of Jesus’ birth. As an evangelical Protestant, he does not hold to Mary’s Immaculate Conception or Perpetual Virginity. I don’t think he intends to offend or mislead Catholics.

Even in this Christmas episode, there is a lot of good, including a portrayal of how Luke learned of Mary’s Magnificat as well as a gesture toward the preservation of relics in the devotion of the early Church. And I think Jenkins’ bold attempt to bring to theaters an unapologetically Christian and biblical depiction of Jesus’ birth is admirable, even if it misses the fullness of Catholic Faith.

But this controversy does show that Catholics need to be educated about their faith and discerning. So let that be one of our New Year’s resolutions: to go ever deeper into the mystery and meaning of our Faith!