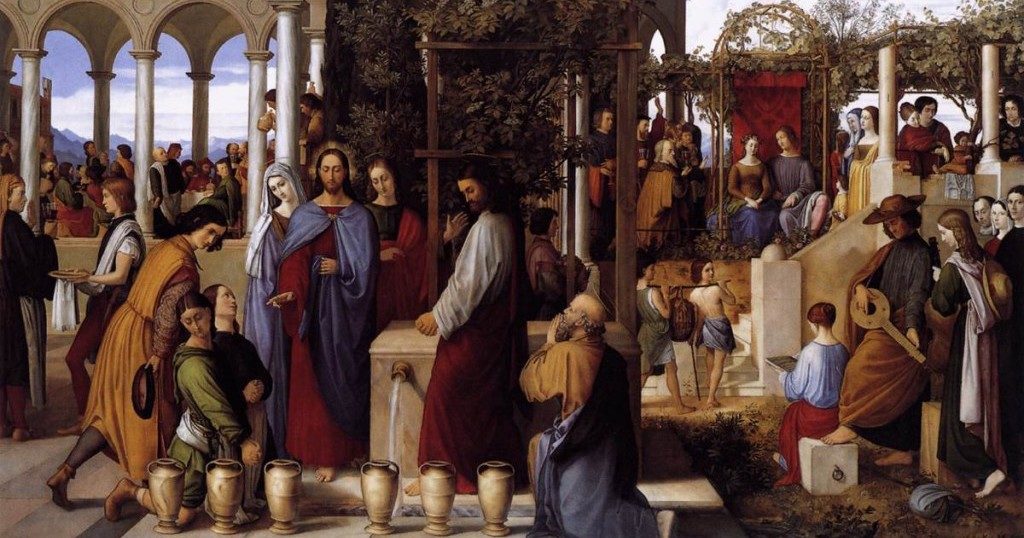 This is the sixth part of a series that follows the biblical story of Mary throughout May. To honor her during her month, we are diving deeper into the mysteries of the Rosary that mention Mary in the corresponding Scripture passage—thereby reflecting on the Blessed Mother’s role through the Gospels.

Need to catch up? You can find the other parts of the series here: Part One: The Annunciation, Part Two: The Visitation, Part Three: The Nativity, Part Four: The Presentation, Part 5: Finding Jesus.

The Wedding Feast at Cana

Whenever I picture the Wedding Feast at Cana, I envision a young Frank Sinatra as the wedding singer crooning out “The Best is Yet to Come,” in almost prophetic vibrato, moments before the original wine supply would run dry. We know the story well, don’t we? This famous episode that began Christ’s public ministry isn’t just the second Luminous Mystery. It’s a heavenly directive that life is too short to drink cheap wine, or maybe that’s just my take on it.

In all seriousness, though, Jesus may have begun the wedding festivities as Mary’s plus one. However, the carpenter from Nazareth quickly proved himself the invaluable guest when the wine ran dry early and the newlywed’s family name was on the line.

There’s a gentle irony that the one who would later reveal himself to us as “the true vine” (John 15:1) would transform water into wine as his first public miracle and the first of many “signs” (2:11).

The New Adam and Eve

As usual, within St. John’s Gospel, there is so much packed into this short narrative spanning only twelve verses. We’re told that it was “the third day” (2:1) of the wedding feast, barely halfway through the normal week-long celebration. We hear Jesus’ seemingly odd address of “woman” to his mother (2:4) and her admonition to the servants, “Do whatever he tells you” (2:5).

The Holy Spirit breathes almost conspicuous detail about the ”six stone jars” holding “twenty to thirty gallons” of water “for Jewish rites of purification” (2:6). Also, there’s the fact that they were filled “to the brim” (2:7). These details speak to far more than eye-witness testimony. As the Holy Spirit does throughout the Gospel of John, there is both a simple and sacramental level of understanding at play here. We just need to have the eyes and ears to receive what God is offering in this wedding reception.

The Bridegroom and His Church

Not only does a “third day” miracle announce Jesus’ earthly ministry, but a third day miracle (resurrection) will culminate it, as well. Jesus’ proclamation of “woman” to the Blessed Mother, too, though seemingly “brash” is another invitation to take a deeper look at the episode. The first woman, Eve, was joined on the day of matrimony to Adam. Likewise, the new Adam (Jesus) and new Eve, Mary, would have their identities unveiled during this wedding feast, as well.

A closer look, too, at St. John’s first chapter reveals something even more interesting. St. John begins by echoing Genesis’ creation narrative, ushering us back to “day one” in John 1:1. As the chapter goes on, note the intentional and creative use of the phrase, “the next day”; it sets up more than a pattern, but a sacramental arrow, if you will.

This was not merely an earthly wedding feast. It was the invitation to the heavenly banquet—the eternal union between Christ, the bridegroom, and his Church!

The Best Is Yet to Come

Imagine how the Blessed Virgin Mary, who most assuredly had great reverence and deep knowledge of the Hebrew Scriptures, must have had her immaculate heart beating with joy as this episode unfolded before her. Knowing how she constantly “pondered all things in her heart,” her contemplative spirit must have been quietly singing praises to her God not only for his fidelity but for her son’s humility as Jesus acquiesced to his Blessed Mother’s request.

Learn how to keep your heart open as Mary did with Ascension’s new book, How to Pray Like Mary. See the book!

To think that this beautiful exchange between mother and son took place prior to all else Jesus would say and do, only reaffirms the beautiful love between them and foreshadowed the sacrifices both would make for the kingdom of God. This mystery is a prophetic foreshadowing and assurance that, indeed, the best was yet to come.

Do you have the faith of Mary, that when you bring your needs and the needs of others to the Lord, he will respond in perfect accordance with the Father’s will? Do you have to fight the urge to “tell the Lord how he should bless you,” or do you have peace that God loves you and has your best interests held within his most Sacred Heart?

Pocket Guide to the Rosary [Book] by Matt Fradd

How to Pray Like Mary [Book] by Sonja Corbitt