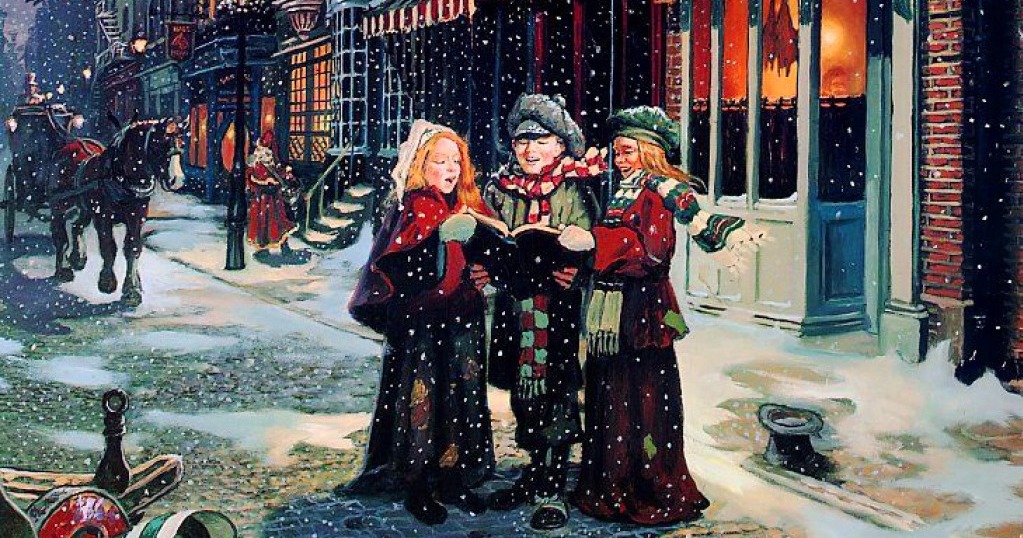 I love Christmas carols. The radio starts playing secular Christmas songs before Thanksgiving to get us into the shopping mood, but I prefer religious carols, to get me into the spirit of the season. After all, as St. Augustine said, “He who sings prays twice.” Learning about the development of some of our favorite Christmas carols can really deepen our appreciation and help us connect with the Christians who passed down their faith to us in song.

Christmas hymns have been around as long as Christmas has been celebrated. In fact, the earliest known Christmas hymn was written by St. Hilary of Poitiers in the year 336AD, just twenty-three years after Constantine legalized Christianity throughout the Roman Empire. It was called “Jesus, Light of All Nations.” Though there is no way of knowing the original melody, you can hear a beautiful version by the Chamber Choir of George Watson’s College here.

Until the Middle Ages, Christmas songs were almost exclusively hymns for religious services. St. Francis of Assisi helped to speed along the development of carols with his creation of the manger scene, which spurred religious piety among the laity. Originally, these carols were based on hymns sung by monks, and some have survived to this day.

“O Come, O Come Emmanuel” sounds like Gregorian chant, and essentially, it is. It is a paraphrase of the “O” antiphons, each one starting with the exclamation “O,” that are chanted as part of the Liturgy of the Hours as Christmas approaches. The lyrics of the carol go back to the twelfth century or earlier, and the melody at least as far back as the fifteenth century. Interestingly, though the song is sung in many languages all over the world and the same ancient melody is used everywhere, the tune was first put to the lyrics when it was translated into English. So it is specifically the English version that has spread throughout the world.

“O Come, All Ye Faithful” is another ancient carol. Probably originally composed by Cistercian monks in the Middle Ages, we can thank an exiled English Catholic for our beloved English version. It was illegal to practice the Catholic Faith in England from 1588 to 1829. John Wade, having escaped to France, had a successful career as a musical copyist known for his beautiful calligraphy. In 1751, he penned “O Come, All Ye Faithful,” the first know version of the carol in English. Did he actually write it? We don’t know for sure, but he gets the credit, anyway.

Although none of Blind John’s carols are sung today, “God Rest Ye, Merry Gentlemen” goes back almost to his time. This familiar tune is mentioned in Charles Dickens’ classic, A Christmas Carol, the singing of which so annoyed the old grump that “Scrooge seized the ruler with such energy of action that the singer fled in terror.”

What Child Is This?

“What Child Is This?” was born out of a near-death experience. In 1865, William Chatterton Dix, a manager at an insurance company, became bed-ridden and depressed after a severe, life-threatening illness. His experience re-ignited his faith, and he authored several hymns, including this one. When it was finally published in 1871, it was set to the tune of “Greensleeves”, a romantic ballad from the sixteenth century about a man serenading his rather aloof lady love.

“Silent Night” was penned in 1818 by a young Austrian priest who asked the church organist to write a melody to be played on the guitar. Why would an organist, who barely knew how to play guitar, use that instrument for Christmas Mass? It would seem the church organ was out of commission. Whether it was damaged by flooding or hungry church mice is unknown, but the result is a simple, touching song that has become one of the most frequently recorded Christmas carols. We have an American Episcopal priest to thank for translating it into English in 1859.

The cheery tune of “Hark, the Herald Angels Sing” was not the author’s idea. Charles Wesley, one of the founders of Methodism, requested a slow, somber melody when he wrote the song in 1739, but apparently it wasn’t terribly popular that way. In 1840, a new collection of carols featured a melody adapted from a cantata by Felix Mendelssohn. The cantata was, interestingly, originally written to commemorate the four hundredth anniversary of Gutenberg’s invention of the printing press—a rather unlikely source for a Christmas carol.

The hauntingly beautiful “O, Holy Night” was an instant hit, but was banned by the French church soon thereafter. In 1847, a French parish priest asked a local poet to write a Christmas carol, even though the poet’s church practice was a bit shaky. The poet wrote the beautiful lyrics and asked a composer friend to create the music. The magnificent carol quickly spread throughout France, however, the local Church soon discovered that the author was a socialist and the composer Jewish, and banned the song for a time. But the people continued to sing it, and in 1871, on Christmas Eve during the Franco-Prussian War, a French soldier ran out of his trench unarmed and began to sing this carol. Silence fell across the battlefield, and when he was finished, a German soldier came out and sang a favorite German carol. A Christmas ceasefire followed.

Away in a Manger

An American tune finally hits the list with “Away in a Manger,” written around 1885, but the original promoters claimed it was written by Martin Luther, the German founder of Lutheranism, in the 1500s. Though popular among Pennsylvania Germans, it was unknown in Germany until years later. The song may have been connected with Martin Luther simply because the author of a collection of Christmas songs wanted to make it sound more impressive. Basically, it was a marketing gimmick.

“The Little Drummer Boy” is another American original—or is it? Written by a school teacher, Katherine Kennicott Davis in 1940, Mrs. Davis noted on her manuscript “Czech carol freely transcribed by K.K.D.” but did not specify the carol. The story is similar to a twelfth century legend, “The Juggler of Notre Dame.” In the story, the old, poor juggler had no gift for the Christ Child on Christmas. So he went to church on Christmas night, and in front of the statue of Our Lady holding a somber-looking Child, he juggled the best he’d ever juggled, and when he was finished, Jesus was smiling.

The Twelve Days of Christmas

No list of historical Christmas carols should be without the controversial “The Twelve Days of Christmas.” Catholics claim it, Protestants claim it, and non-Christians say we’re both wrong.

As the story goes, back when practicing the Catholic Faith in England could put you in the gallows, parents secretly used this Christmas carol to teach the children their catechism: two turtle doves represented the Old and New Testaments, three French hens were the three theological virtues or the Trinity, and so on. Of course, since non-Catholic Christians have many of the same beliefs, many Christians claim that it was a way to teach Christian children the faith, not specifically Catholic children during a time of persecution.

The problem non-Christians have with this legend is two-fold: first, that the symbols have absolutely nothing to do with what they supposedly signify—which as a former homeschooler, I can tell you makes a rather poor mnemonic; second, that there was another similar song at the time, “A New Dial,” that did in fact apply those meanings to each of the twelve days between Christmas and Epiphany. Here are the words to “A New Dial” and here are the supposed meanings of the Christmas song.

I’ll leave it up to you to decide what to believe about “The Twelve Days of Christmas.”

I find that learning about the surprising history of some of our beloved Christmas carols deepens their meaning and shows us how God can use anything for his greater glory, as long as we’re willing to give. And that’s an important message in this season of giving.

All About Advent: Christmas Music, Prayer, and the Liturgical Calendar

7 Ways to Find Peace at Christmas