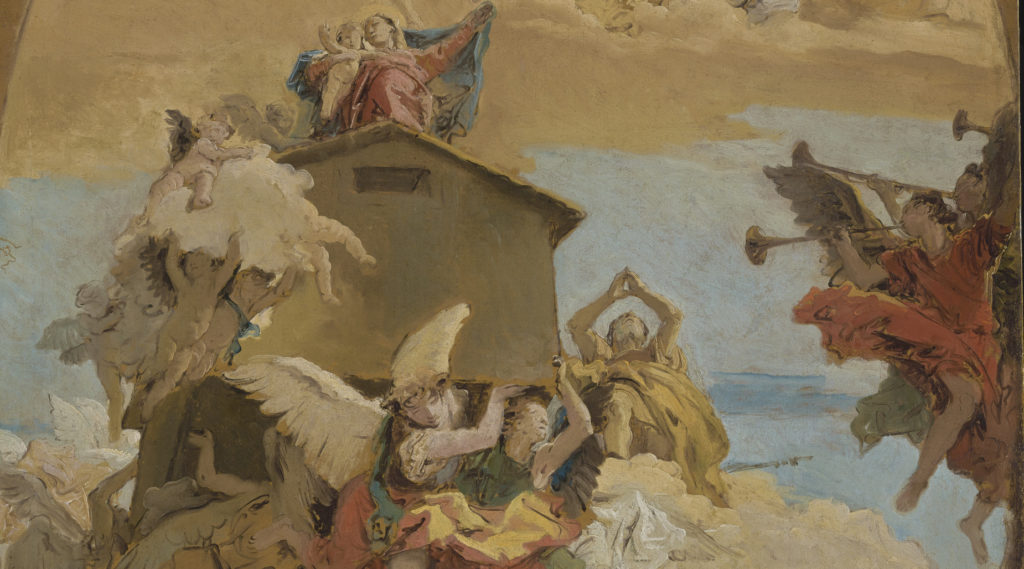 Today the global Church will celebrate the optional memorial of Our Lady of Loreto for the first time. Unlike most other Marian feast days, Our Lady of Loreto doesn’t refer to an apparition or a Marian title. It refers to a building. Specifically, it refers to the humble home in which Mary grew up and the extraordinary measures God took to preserve it.

As Robert Cardinal Sarah wrote in the letter announcing the institution of the feast day:

“This shrine recalls the mystery of the Incarnation, leading all those who visit it to consider ‘the fullness of time’, when God sent his son, born of a woman, as well as to meditate both on the words of the Angel announcing the Good News and on the words of the Virgin in response to the divine call. Overshadowed by the Spirit, the humble handmaid of the Lord so became the dwelling-place of divinity, the purist image of the holy church.”

The Story of Loreto

The Sancta Casa of Loreto is not impressive. It is a stone house with three walls and no foundation, measuring about 31×13 feet. It originally stood in Nazareth.

The events that occurred in and around the house, however, are extraordinary. Tradition tells us that this is where Our Lady was born. It’s also the site of the Annunciation and where the Holy Family lived for many years.

We know that the early Christians revered this house as Mary’s home. St. Epiphanius, St. Willibald, and the Venerable Bede all wrote about it. Later, St. Helena even built a basilica over it. St. Louis IX of France was the last saint to visit the sancta casa in Nazareth in 1251, just before the Fall of Jerusalem. St. Helena’s basilica was destroyed in 1263.

This is where the story gets interesting. The Sancta Casa appeared in Italy as early as 1291. Legend says that angels carried the house from Nazareth to modern-day Croatia, then on to Italy. There’s actually a detailed story about two brothers discovering the Sancta Casa and arguing over how to make the most profit from it. The house then disappeared and reappeared on a road next to a ditch in the town of Loreto, off the Adriatic coast.

Some historians believe that a family called the Ageli was responsible for bringing the house over by ship. That’s fine; Catholics aren’t required to believe that angels affect archeology, and there’s strong evidence supporting that theory. But archeologists in the 1960s actually did find the Sancta Casa’s stone is from Palestine, as are minute bits of pollen found in the stone. There is also graffiti on the stone that matches graffiti in St. Helena’s ruined basilica. Finally, measurements of the remains of the foundation in Nazareth perfectly match the Sancta Casa. It’s the same house.

How Loreto Has Shaped the Church

Pilgrims began to flock to Loreto immediately after the Sancta Casa appeared. In 1310, Pope Clement V issued a Papal Bull granting indulgences to pilgrims. Around this same time, a cedarwood statue of the Madonna and Child was placed in the house. The statue became blackened by lamp smoke, turning it into a Black Madonna. It is the famous Our Lady of Loreto statue.

The Sancta Casa has inspired three different basilicas in the course of Christian history, one in Nazareth and two in Italy. The most recent was built under Pope Sixtus V and contains work from some of the most important artists and architectures of the Renaissance. Galileo, Mozart, Descartes, and Cervantes all visited.

Over two hundred saints have made pilgrimages to Loreto. They include Ignatius of Loyola, Charles Borromeo, Thérèse of Lisieux, Frances Xavier Cabrini, Louis de Montfort, François de Sales, and John Paul II. The latter actually visited twice. He had this to say about Loreto:

“The threads of the history of the whole of humankind are tied anew in that house. It is the Shrine of the House of Nazareth, to which the Church that is in Italy is tied by providence, that the latter rediscovers a quickening reminder of the mystery of the Incarnation, thanks to which each man is called to the dignity of the Son of God.”

The Message of Loreto

Individual communities have celebrated the Feast of Our Lady of Loreto for decades. Pope Francis opened the feast to the world on October 7 and placed it in the middle of Advent.

The timing isn’t a coincidence. Loreto reminds us that God didn’t choose a mighty, otherworldly being to bear his son, or even a rich and powerful empress. He chose Mary. He let his son’s mother enter this world in a small stone house in an outpost of the Roman Empire. She did chores there, brushed her hair, had restless nights staring at the ceiling. She welcomed an angel and agreed to give birth to the Messiah in that house. She packed her bags and left from that house to visit her pregnant cousin. She raised Our Lord, made his meals, watched him play with St. Joseph on that floor.

To quote Pope St. John Paul II again, Loreto is “the first temple, the first church on which shone the light of the maternity of the Mother of God.”

God in his mercy left us this ordinary building that became the setting to crucial moments in our salvation. We can touch those walls and look at that same ceiling. All of this serves as a physical reminder that we aren’t uttering empty words to a distant sky daddy; we’re part of a story that has left tangible imprints across the world.

The Litany of Loreto

This prayer became popular at the Santa Casa in the Middle Ages. Its popularity is due to its focus on each of Our Lady’s attributes, from victorious queen to comforter of the afflicted. See if you can make time to pray it and celebrate Our Lady of Loreto’s first global feast day!

What Angels Really Are and What They Did in Loreto

A Guide to 5 Key Marian Apparitions (#3 Is Hardly Known)

Painting, “The Miracle of the Holy House of Loreto” (1743), by Giovanni Battista Tiepolo, sourced from getty.edu.