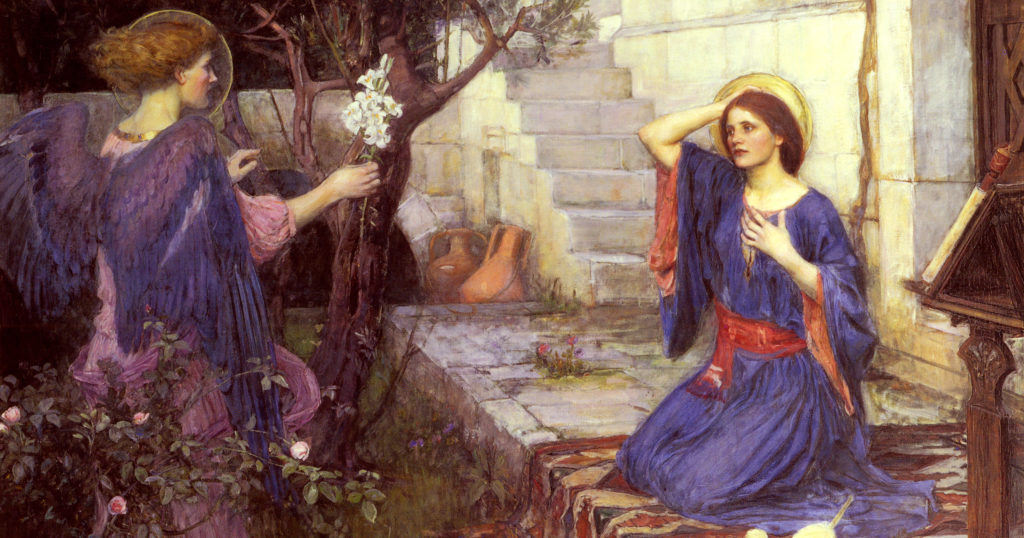 Santa Fe is blanketed in snow, and the smell of piñon fires has begun to fill the air in the early darkness of the evenings. Nothing reminds the senses more surely that Advent has arrived than such simple things. There is a warmth and a peace that at no other time seems to surround them, and I suspect it is because many hearts now begin to dwell upon a deeply consoling truth.

A searching reader of the saints will quickly come upon a great secret that ignites their lives, and that secret takes its spark from the mysteries that fill our hearts now. Over and over, their spirituality could be characterized in two ways: centered upon the Eucharist and deeply devoted to Mary. Wonderfully, there are few points of meditation that can draw us more powerfully into a love of both than the Annunciation.

As we enter a new liturgical year with Advent, or even as we simply enter a new work week and pick up a rosary, it is fitting that this meditation should be first. After all, it is with the Annunciation that our saving relationship with Christ begins. It is at the Annunciation, with Mary’s fiat, that Jesus becomes flesh and blood–the very same flesh and blood we receive at each Mass in the Eucharist.

The Annunciation is a favorite scene for artists to imagine, and it never fails to engage our faithful imaginations as well, as we try to picture the event through Mary’s eyes. Starting with Luke 1:26-28, we can wonder how things might have looked.

“In the sixth month the angel Gabriel was sent from God to a city of Galilee named Nazareth, to a virgin betrothed to a man whose name was Joseph, of the house of David; and the virgin’s name was Mary. And he came to her and said, ‘Hail, full of grace, the Lord is with you!’

She Was Greatly Troubled

Gabriel was sent to Mary. Did she see him? Did she see with her eyesight?  With her spirit? When Gabriel appeared to Zachariah announcing John just a few lines before, Zachariah seems to have seen him very physically, as his location is described (Luke 1:11).

So, perhaps things were just as medieval artists depict, with a hovering angel interrupting Mary at her work or her prayer. I love to look at those pictures to stir up my devotion. Perhaps, however, what Mary saw was more mysterious or can’t be depicted in human art at all.

What might the scene have sounded like? It is clear that Mary heard Gabriel in some way, and that he used distinct language—the very words we repeat devoutly today to greet Mary.  The language Gabriel used, in fact, caused Mary great distress. Luke 1:29 tells us:

“But she was greatly troubled at what was said and pondered what sort of greeting this might be.”

Why would she ponder the greeting and be troubled by it even more than she would ponder and be troubled by the bizarre circumstance of an archangel shattering an inter-dimensional barrier and bursting in on her day? That must have been some greeting, and it was. Gabriel said, “Hail!”

Hail doesn’t mean hello. In fact, we use it in only one context: to salute a highly-placed superior. “Hail, Caesar!” would have been the common usage in Mary’s time. Now, if you were in the middle of your day, perhaps locating stray cheerios beneath the sofa, and a famous, powerful congressman charged in and said “Good Afternoon, Mr. President,” would you be disturbed?

Certainly, but Mary would have been far more so than you or me for at least two reasons. First, because of the perfection of her virtues, we know that her humility, the root from which all other virtue grows, would have been exquisite. This was so much the case that even the mildest untoward acknowledgement would have pained her.

Second, because of the source. How would an archangel, a being created so superior to humankind, greet her as one appointed above him? “Hail, Holy Queen,” he might have said as we do. This mystery is so beautiful and profound, it reaches back to God’s first thought of creation and forward to his presence in the tabernacle today unto the eschaton.

To Serve or Not to Serve

The mystical visions of, appropriately, a Conceptionist nun, Venerable Maria de Agreda, on this subject cast interesting light all the way back to the war in heaven. They tell us that Lucifer was moved to the rage of his non serviam when realizing the humility that would be required of him.  Someday, a mere human woman would be Queen of the Angels, worthy of the greeting “Hail.”

Archangels Michael and Gabriel, on the other hand, were awestruck by God’s plan. Gabriel longed to speak the greeting, and Michael’s battle cry became his name when he asked “Who is like God?” upon considering this mystery and defending it. Let’s pray that they inspire that awe to come upon us too as we probe further into our meditation on the Annunciation.

A Soul of Gold

Mary, so unaware of her own perfection, is frightened and confused by its acknowledgement. But how could she be anything less than God’s highest creation if she was made to be his mother?  Do we not take care that even the paten and chalice that bears Christ’s Body and Blood in the Blessed Sacrament be made of gold? Of what gold must the woman who bears his Body to humanity be made?

Here, in the Annunciation, we come to one moment in which that gold of Mary’s soul is proven. God left the salvation of humanity down to a singular human choice—hers. God didn’t force himself on Mary, nor does he on us.  Instead, he sent his wing man, Gabriel, to seek her consent. (That brilliantly insightful angel pun is my saintly mom’s, not my own.)

We can be certain that a pregnant, unmarried teenager in a rural, conservatively religious, middle-eastern community was nearly guaranteed to be stoned to death in shame, so imagine Mary’s courage. But more, imagine Mary’s self-abandon through her trusting love of God—the real gold of her character on display.

“Behold, I am the handmaid of the Lord. May it be done to me according to your word.”

Then the angel departed from her.

Now, only because of Mary’s brave choice to lovingly welcome and receive Jesus, we can receive Jesus! Because of her yes, we have the option of a yes. We can bear him in our lives as well.

My mom and I have the great joy of preparing local parish children for their first Communion. We have been moved to see that it is during Advent, even more so than in the days of Easter leading up to their reception, that their wonder regarding the Eucharist is awakened. Their beautiful, tiny hearts grasp what happened at the Annunciation.

They understand that at that moment, the God who is greater than his universe became little. “A teeny-tiny little-bitty baby in his mommy,” they tell me. Like them. Small and breakable. By his own will, God became in need of love and protection and acceptance and desire.

They understand too the mystery that, thanks to Mary’s fiat at the Annunciation, this is still how Jesus comes to us. We too receive his body. Small and breakable. We have the option, like Mary, to welcome or dismiss him—to nurture him or even, tragically, to hurt him. We indeed have the choice that society loves to emphasize is ours.

God waits also for our fiat, longing with an aching heart that we choose to allow him to live and grow in us.  For us fortunate Catholics, that’s not a remotely poetic statement, but a literal and visceral one. The Eucharist is the very body of Jesus that Mary bore to us.

Like I first sought to imagine the Annunciation through Mary’s eyes as if in painting, now I can only go further through a piece of music—a masterwork of the season, embracing the events of Advent and Christmas in the context of Mary and the Eucharist.  It’s Lauridsen’s setting of O Magnum Mysterium.  I recommend playing it here.

As ideally as I imagine is possible on this earth, the music exalts the mind-bending mystery that through Mary, we see God himself. A paraphrase of the poetry could read:

Let’s allow such wonder at Christmas approaching re-awaken our awe at the presence of Jesus in the Eucharist. Like the children realize, he is tinier than a child, more vulnerable than he once was as a baby fleeing from Herod, and more hidden than in the most obscure stable in Bethlehem.  Their faith challenges me to wonder, can I not greet him even more tenderly than I would in any of those circumstances?

May we also remember, for Christians in many parts of the world, to gather to receive Jesus in the Eucharist is a profound imitation of Mary’s acceptance of danger. Because Advent and Christmas celebrations create a target for extremist terror attacks, our brothers and sisters stake and too often lose their lives. Faced with their example, I must ask myself, do I truly realize who I look upon so easily?

As Advent begins, I am taken with the sparkling beauty of the season. I long to see the Nativity scenes go up at our home and our Church. Sometimes, like a child myself, I cry with joy when I get to touch a kiss to the chubby little toes of the Baby Jesus figure.

That figure is plaster. Do I cry with greater joy when at every Mass I get to touch not a figure but Jesus himself, closer than with a kiss? Would I take anything like the risks that Mary did, or that our brothers and sisters imitate, to receive him with love?

For many of you reading this, I know your answer would be yes. Perhaps that’s why the beginning of the season brings you such peace.  I wish you the most beautiful Advent and Christmas to come.

Mary’s May Crowning: Part 1, the Annunciation

Advent: More Than a Chocolate Calendar