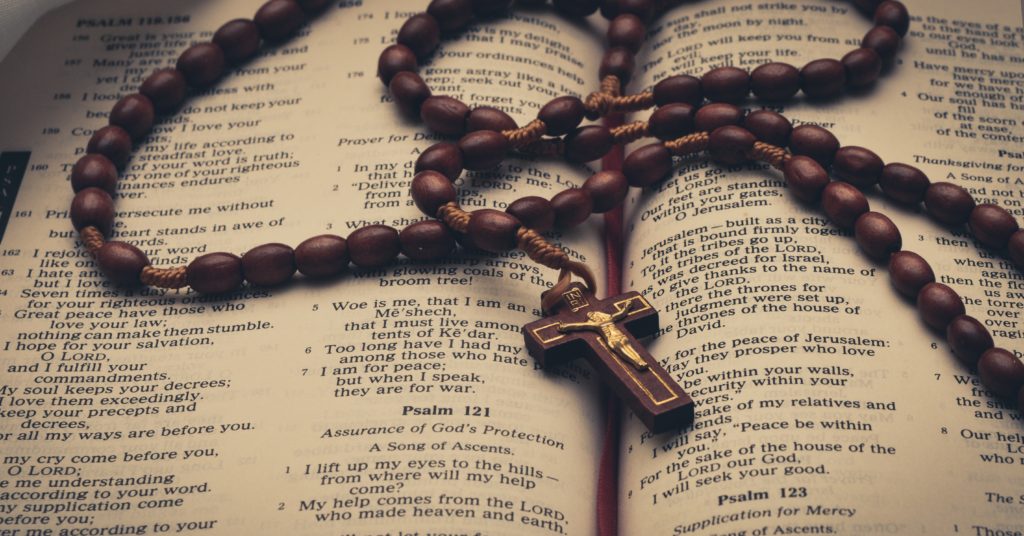 October is the month of the Rosary. The Rosary is so much more than just a string of beads; it’s a weapon, a communication device, and a portable retreat. There’s a reason it’s been a fixture in Catholic culture for centuries.

I’m the type of Catholic who knows the Rosary is important, but struggles to actually pray it. The following stories help me to remember the Rosary’s power and actually find the motivation to pray it. I hope they can help you, as well!

1. That time the Rosary converted a Satanist priest to a Catholic blessed

Blessed Bartolo Longo was born to a devout Catholic family in 1841. His formative years were a tumultuous time for Italy, and he was swept up in nationalistic fervor. Many of his college professors were actually ex-priests who took a dim view of the Catholic Church.

Bartolo started to dabble in the occult. He eventually embraced Satanism. He was consecrated a Satanic priest and promised his soul to a demon. To his family’s dismay, he preached against the Catholic Faith and presided over blasphemous rituals.

His mental and physical state deteriorated until he couldn’t deny that he needed help. He began to talk to a Catholic professor from his university, who referred him to a Dominican priest. The priest met with Bartolo for three weeks before he was able to offer absolution.

Bartolo became a third-order Dominican, but he was still plagued with guilt about his past life. He was especially traumatized by the experience of promising his soul to a demon and doubted that God would accept him after having done something so heinous. These thoughts nearly drove him to suicide. But then he remembered a homily he had heard on the power of the Rosary.

“Falling to my knees, I exclaimed: ‘If your words are true that he who propagates your Rosary will be saved, I shall reach salvation because I shall not leave this earth without propagating your Rosary,” he said

Bartolo spent the rest of his life promoting the Rosary and surrendering his problems through it. He even helped build the Basilica of Our Lady of the Rosary in Pompeii. He wrote extensively on the Rosary, and his writings influenced Pope St. John Paul II’s decision to add the Luminous Mysteries.

2. When all of Christendom prayed the Rosary and won an impossible battle

The turmoil of the Reformation left Christendom open to invasion. The Ottoman Empire took advantage of this weakness in October of 1571. They invaded Cyprus and took 15,000 Christians captive. The Turkish army greatly outnumbered European forces, and it seemed like all hope was lost.

Pope Pius V played diplomatic chess and persuaded Italy and Spain to work together to fight the Turks. The pope also commanded all Catholics to pray the Rosary. Churches across Western Europe were filled with Christians praying for an unlikely victory.

On the morning of October 7, Don Juan of Austria led his 80,000 person fleet against the Turks’ 120,000. The Christians nearly lost, but Don Juan regrouped and won. The Christian captives were recovered and set free.

The pope had a vision of the victory before news of it had reached Rome, reportedly waking up in the middle of the night and shouting, “The Christian fleet is victorious!”

In recognition of this extraordinary victory, Pope Pius V declared a feast day for Our Lady of Victories. This was eventually changed to the feast of Our Lady of the Rosary, celebrated on October 7. It’s a time for all Catholics to remember the power of the Rosary.

If these prayers could save Christendom, couldn’t they also save us from whatever keeps us from God?

Improve the Way You Pray the Rosary

Pocket Guide to the Rosary is a truly magnificent resource that incorporates the Bible, saints, and Catholic Tradition to help Catholics get more out of meditating on the mysteries of the Rosary.

3. All the times Our Lady has asked us to pray it

The Rosary is a common theme in Marian apparitions. Here are some of the times she has made it clear that she wants us to pray it:

1973 (Akita, Japan): Our Lady warns Sr. Agnes that we ought to “Pray very much the prayers of the Rosary.”

1917 (Fatima): The Blessed Virgin revealed herself as “Our Lady of the Rosary” and requested frequent recitation of it.

1858 (Lourdes): Our Lady was holding a Rosary in her first apparition. The first thing she said to Bernadette was a request that Bernadette pray her Rosary. They later prayed it together.

1830 (Miraculous Medal): On Mary’s first apparition to St. Catherine Labouré, before she even brought up the Miraculous Medal, she bemoaned the fact the Rosary wasn’t prayed more often.

There are more, but you get the idea. The Blessed Virgin loves the Rosary. She wants us to talk to her by praying it.

4. That time the Japanese lost their clergy but kept their faith because of the Rosary

St. Francis Xavier, like most saints, loved the Rosary. He prayed it daily while he was in Japan. He used to send rosaries ahead to the sick and dying so they would pray before he was able to administer Last Rites.

In 1615, all missionaries were kicked out of Japan. The faithful there were left without any clergy or access to most of the sacraments. Even Bibles were scarce. They essentially had three ways to practice their faith.

And they did all three. Japanese Catholics baptized each other in secret, practiced Christian marriage, and prayed the Rosary constantly. This kept the Faith alive in a country with no access to the Liturgy or the Eucharist, simply by meditating on the life of Christ with his mother.

Oliver Cromwell is a super villain in Catholic history. He came to Ireland in 1649 and began a brutal suppression of Catholics, which created strife that is still reverberating today. He committed war crimes against Catholics. He took Catholic land and gave it to Protestants just so Catholics wouldn’t have power. In short, he was the worst.

He also helped enforce penal laws, which effectively made it illegal to be Catholic. The Irish gave exactly zero regards to this, and instead hid their faith and moved their seminaries to other countries while remaining very much Catholic and sometimes dying for that. The Rosary remained an important part of their faith, though they adopted small penal rosaries that were harder to detect.

Cromwell knew he failed at subduing the Irish to Protestantism, and he blamed the Rosary. He wrote to his superiors:

“All is not well with Ireland yet. You gave us the money, you gave us the guns. But let me tell you that every house in Ireland is a house of prayer, and when I bring these fanatical Irish before the muzzles of my guns, they hold up in their hands a string of beads, and they never surrender.”

You bet we do hold up our rosaries, Oliver, and you better believe we don’t surrender.

6. When John Paul II had this simple statement about the Rosary

St. John Paul II loved the Rosary. He prayed it every day and frequently encouraged families to pray it together. He even wrote an apostolic letter about the Rosary, in which he encouraged the inclusion of the Luminous Mysteries.

I don’t have a great story here, although the tale of his being shot and its connections with Fatima are worth looking into when you have a moment. Instead, I just want to share his beautiful little way of describing his daily Rosary:

“It’s our daily meeting which neither I nor the Blessed Virgin Mary neglect.”

I love this. The Rosary isn’t something you do to say you’ve done it; it’s a dialogue between you and your mother. She shows up for it too.

Pocket Guide to the Rosary [book]

The Power of Praying the Rosary [CFRs video]

How to Really Pray the Rosary [CFRs video]