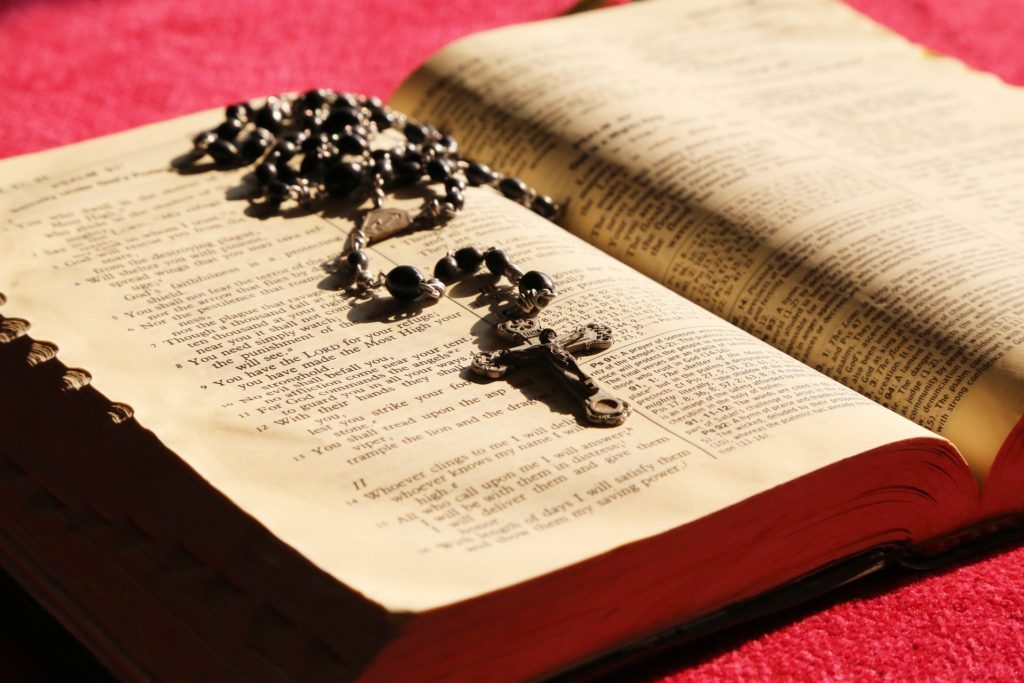 Recently, I met up with an Evangelical friend of mine for coffee to catch up on family, work, ministry, and college football. In the course of the conversation, he asked me, “So if you had to pick one Bible study, which is your absolute favorite?”

He, of course, meant which “series” or “author” or “format” do I take the most from as a husband, father, catechist, etcetera.

“Actually, the Rosary is my absolute favorite Bible study,” I responded sincerely (in a way designed to hopefully elicit a follow-up question from him).

“Yes, exactly. The Rosary is my favorite Bible study. It’s far more than a form of prayer, it’s a deeply scriptural, contemplative, and interactive study.”

The conversation that followed quickly turned into an impromptu history on the Rosary, its significance, growth as a Catholic devotion, and, ultimately, its supremacy over other forms of study.

The Rosary is one of the most well-known and popular forms of prayer that we have as Catholics. As such, it’s rare to move through the day and not see a rosary: either in hand, on a nightstand, or a table, or strung around the nearest rearview mirror. Sometimes, we forget what an enigmatic symbol and “device” it appears to be to our non-Catholic brothers and sisters, and conversations like the one with my Evangelical friend remind me that not everyone understands why we Catholics might appear so “Mary crazy.”

In the early thirteenth century, the Blessed Virgin Mary is said to have appeared to a young Spanish priest we now know as St. Dominic. While the roots of the rosarium (Latin word meaning “rose garden”) date back even earlier, St. Dominic is credited as being the one who first gave this prayer to the Church in its current form, on the expressed wish of Mary, the Mother of God.

Over the centuries, the Rosary has grown into a timeless family prayer, one that has been prayed by billions of souls in virtually every language around the world. At any moment of the day, in almost every conceivable corner of the earth—in homes and in churches, in hospital rooms and in schools, in jail cells and on battlefields—the Catholic faithful join their prayers and dive more deeply into the mysteries of Jesus Christ’s life through the Rosary.

Over the past several years, October has come to be known as the “month for the Rosary.” Since the Feast of the Holy Rosary is October 7th and the anniversary of the Blessed Virgin’s final appearance at Fatima is October 13th, we pause for a month and offer a renewed devotion to this timeless offering and bask in the intercessory graces which flow from it. In her appearances in both Lourdes and Fatima the Blessed Mother reiterated her desire for her children to dedicate themselves to this devotion. Given her own admonition for us to pray it, I’d submit that the Rosary is not only my favorite form of Bible study but, also, that of Mary’s … who, as Sacred Scripture affirms, “ponders all things in her heart” (Luke 2:19); Mary is the first Christian contemplative.

More than a Prayer

The mysteries of the Rosary are inexhaustible. Regardless of how many times you meditate on one of the twenty mysteries or read through its corresponding Scripture passage, the Rosary allows pause for the Holy Spirit to come and dwell in us, too. As we grow older and wiser, the Rosary invites us ever deeper into the heart of God, through the intercession of Mary’s immaculate heart. Stop and consider what a gift the mysteries are to us, no matter what season or struggle life currently brings your way.

As you reflect on the twenty mysteries, you have the opportunity to see the characters from a new point of view. The Rosary brings lectio divina into a whole new context. Put yourself into their sandals as they walk. In each mystery, place yourself in the story. Hear their voices. Watch their reactions. See how God’s plan to send a redeemer unfolds. Pause to consider these first five mysteries preserved on the pages of Sacred Scripture.

At first glance, the Joyful Mysteries might not appear all that joyful. A teenage virgin is pregnant, but not with her husband-to-be’s child. She leaves home for months and later travels over ninety miles in her third trimester. She gives birth in a cave. She learns from a prophet that both she and her child will suffer greatly. Years later, the preteen Son of God goes missing for three days. Most people would not consider these moments very joyful. Far easier scenarios have sent parents straight over the edge. Prayerful reflection—true Bible study—on these mysterious events, however, reveals a cause for intense joy. God was on a foretold rescue mission to save us, and that mission included courageous souls fighting through incredibly challenging situations.

The Luminous Mysteries extend Christ’s invitation to you to be a light in the world. As the world and culture around us grow increasingly dark and seemingly hopeless, these five gospel moments enliven our minds and enrapture our souls, once again. As you reflect on them, you’ll enter into some of the most miraculous and amazing moments of Christ’s life on earth. We are reminded not only to be Christ’s light, but of its necessity and power.

The Sorrowful Mysteries demonstrate all that is evil in man and all that is beautiful in God. Have you ever felt abandoned or alone? Our Lord did in the Garden of Gethsemane. Have you ever suffered physical or emotional abuse? Jesus did, and he knows your pain. Have you ever been mocked for who you are or what you believe? Christ was, yet still he loved his enemies. Have you ever felt that living the Christian life every day was just too difficult? He suffered betrayal, desolation, and humiliation completely, even unto death, and he did it for us. We have a Savior who would rather die than risk spending eternity without us.

The Glorious Mysteries remind us that God our Father doesn’t merely keep his promises to us; he exceeds them. Not only did Jesus rise from the dead; his victory offers you the opportunity to live forever. He ascended into heaven, where he now reigns. And as the Bible reminds us, “If we endure, we shall also reign with him” (2 Timothy 2:12).

When the Holy Spirit descended in power, he gave birth to our Catholic Church and ensured, through the sacraments, that we would never be without Christ. Our Lord gives us the gift of his own mother (John 19:26–27), and in Mary’s assumption and coronation, we are assured that she prays for us and with us. She is calling us to look to her son, to serve him and him alone.

A Call to Arms

The Rosary is more than an invitation to prayer and, even, more than a Bible study. The Rosary is a declaration of war on sin and darkness. The Rosary, like the Word of God, is living and effective (Hebrews 4:12). When you pray the Rosary, things happen, hearts change … grace flows. As Pope St. John Paul II said, “the most important reason for strongly encouraging the practice of the Rosary is that it represents a most effective means of fostering among the faithful that commitment to the contemplation of the Christian mystery.”

In a time so filled with busyness and overstimulation—where screens and noise abound—the gift of the Rosary cannot be overstated. Every bead is an invitation from our Blessed Mother to kneel beside her in prayer and reflection upon the gift and life of her son. Contemplate these realities through her perspective. Allow her to swaddle you tightly as only a mother can.

I’m meeting my friend for coffee again next week. We’re going to walk through the Joyful Mysteries passage by passage. We’re both bringing our Bible, but I’m also bringing him a gift. The Rosary on my rearview will soon be his, for in those beads I’m introducing him to my mother who, it turns out, is his mother too.

Praying the Rosary in October: The Joyful Mysteries

Praying the Rosary in October: The Luminous Mysteries

Praying the Rosary in October: The Glorious Mysteries

Is the Rosary ‘Vain Repetition’?

The Bible Is Inspired by God
Biblical Superpowers: Miracles in Acts of the Apostles
You May Just be Seeing the Tip of St. John's 'Iceberg'
Scripture, Sacrament, and God’s Invitation to Intimacy
Has Ascension's free media strengthened your faith?
You can now offer ongoing support for this content with a recurring gift.
Support Ascension