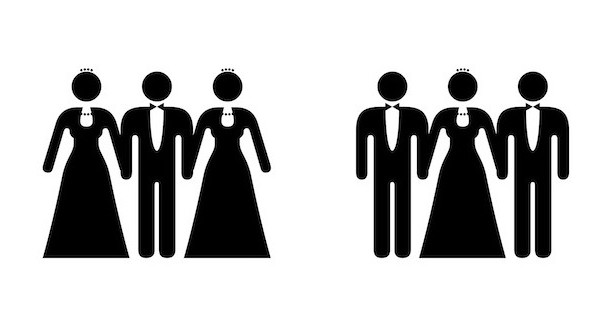 In 2010, TLC premiered Sister Wives, a show featuring a modern polygamist family. It stars a man and his four wives, with whom he had eighteen children. The show became very popular and ran for eight seasons over the course of four years, showing the ins and outs of how the husband navigated his four marriages and how the wives dealt with each other, their kids, and their shared husband. Although Sister Wivesshowed polygamy in a positive light, no mass polygamy movement has begun. On the other hand, polyamory, polygamy’s distant cousin, is on the rise.

While polygamy is defined as a man with multiple wives, polyamory refers to “people who choose to commit themselves to more than one committed intimate partner at the same time.” This could mean a husband and a wife who both engage in intimate relationships outside of their marriage, or it could mean three partners “equally” committed to each other—or any number of other permutations. In an article on the topic published by the Atlantic, polyamorist Sarah explains:

“What I love about polyamory is that everything is up for modification … There are no ‘shoulds.’ You don’t have to draw a line between who is a lover and who is a friend.”

Even still, Eve, a polyamorist interviewed in the BBC article “Polyamorous Relationships May Be the Future of Love,” argues:

“Poly is a lot of work. Having a lifestyle where you enjoy casual sex and hook-ups is a lot less work than maintaining five current long-term relationships.”

Some polyamorists call their lifestyle “ethical non-monogamy.” They do not view themselves as “swingers,” but as people who want to be intimate with multiple partners.

Can Polyamory Be Legalized?

Because sexual orientation and gender identity issues are at the forefront of our national discussion—and because America often follows the sociocultural trends seen in more socially liberal Canada and Western Europe—I predict that the U.S. is not too far from seeing a legal movement to expand marriage rights to polyamorists.

I also contend that, while polyamory may grow, it will ultimately not satisfy; it will lead to more pain and heartache, for one primary reason:

Polyamory Turns an Icon into an Idol

When a culture loses its focus on God, it becomes disoriented and begins to find meaning and fulfillment in finite things—which will never satisfy the infinite longing God has placed in our hearts.

As Pope St. John Paul II teaches in his Theology of the Body, the sexual union of man and woman is an icon—an “image”—of our eternal union with God in heaven (non-sexual, of course). All sexual expressions—even those that are disordered and sinful—are attempts to experience the divine union for which we have been created. The problem, however, is when we turn the icon into an idol—an “end” unto itself rather than an image that points us toward God.

Polyamory is such an idol. It seeks to satisfy that eternal longing in our hearts but falls short because it is contrary to the faithful and exclusive “gift of self to another” intended by God. Undoubtedly, more aberrations of the sexual gift will come on the scene—and, like polyamory, they will not satisfy. More suffering will follow, especially for women (who, I suggest, have been endowed with a particular sensitivity and giftedness in understanding the authentic meaning of the sexual union).

Persons in polyamorous relationships may experience a veneer of “freedom,” and they may even be “fruitful” in bringing about new human life. But, by their very nature, such unions are not “total” or “faithful” in the way God intends us to be with our spouse.

The Need for Formation in the Theology of the Body

The sad reality is that most Catholics have little or no intellectual foundation from which they can explain why polyamory is contrary to natural law and the vision that God has offered to humanity. In a culture where decisions are made based on sentimentality, it is easy to convince Catholics and others that polyamory is reasonable as long as one “loves” whomever he or she is attracted to.

Consequently, Catholic families, parishes, and schools must be formed in the Theology of the Body. Fortunately, resources are present nowadays to offer this formation. Until a greater number of Catholics, and our society as a whole, come to know and live the Theology of the Body, we can expect to see things like polyamory to have their “day in the sun,” their period of acceptance. But, as we know, mere acceptance does not mean that a belief or behavior is true, nor that it will ultimately satisfy the longings of the human heart.

This article was first published on the blog at matthewpinto.com.

YOU: Life, Love, and the Theology of the Body (study program)

Why Adoration Is Essential for the Soul and Body﻿

How a Chicken Leg Can Teach Us Holiness