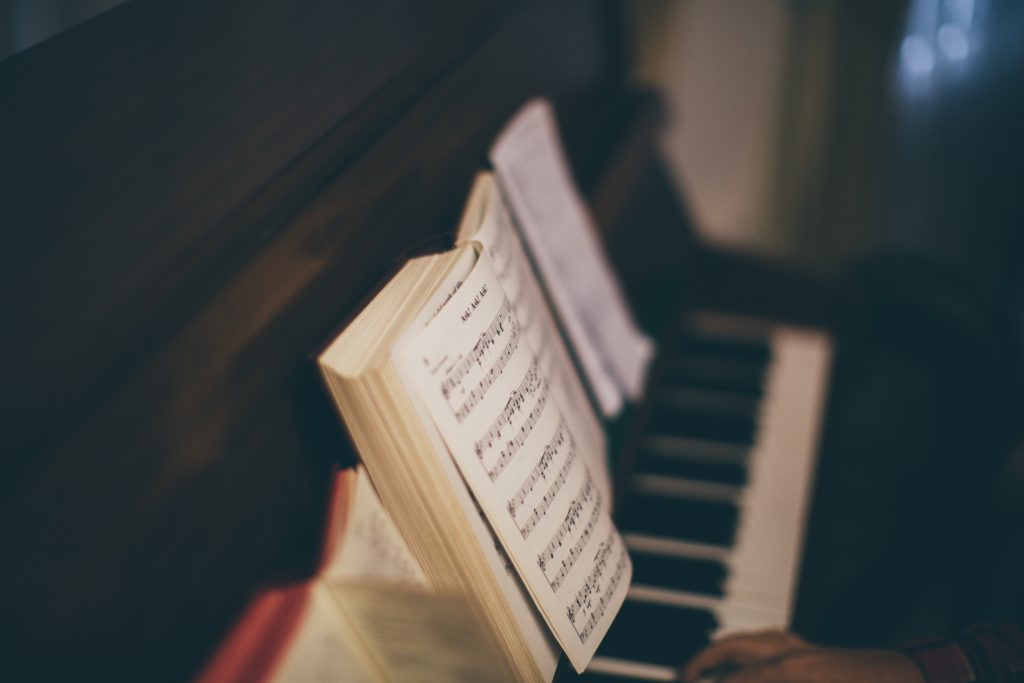 In our efforts to worship God with the gifts he gave us, sometimes our own flawed humanity is put on display more prominently than the actual gifts. We asked Catholic music ministers what their most embarrassing moment was while leading music at Mass. Here are the top ten among over seventy-five responses:

“I was playing piano for a Mass at St. Mary’s in College Station a few years ago. If you haven’t been to St. Mary’s before, the piano is the most “front-and-center” thing to the congregation (besides the altar)—so the pianist is easily seen by everyone.

I rarely take my phone with me into Mass, but for some reason this day I had it with me in my back pocket. Right before the Gloria, the priest, Fr. Mike Sullivan, said “let us call to mind our sins and ask the Lord for his mercy…

Fr. Michael Sullivan is beautifully contemplative during the Mass, so he typically pauses longer than usual during the examination.

Well, right then, I must have sat on my home button, so I woke up Siri.

You know how you can tell Siri to call you something besides your name? Well, she calls me ‘Big Papa.’

So in front of eight hundred college students in complete silence, they heard ‘I’m sorry Big Papa, I can’t help you with that right now…’

There was laughter. There were looks. It was awful/hilarious. Unfortunately I had a microphone within two feet of me, so everyone heard it.

Needless to say, I never bring my phone with me to Mass anymore.” —Johnny D. Philp

“One Sunday, I had been terribly late getting to Mass where I was supposed to lead music, and forgot to turn an alarm off on my phone. So in the middle of the consecration (of course), my phone started blasting a big band Frank Sinatra song I set the alarm to … in the pew, with me up at the piano unable to stop it. My mom fumbled to grab it and started frantically tapping and pushing, but all she managed to do was hit the snooze. Ten minutes later as the congregation fell silent after the Agnus Dei, it went off AGAIN. This time Mom managed to shut the phone off completely, but I still wanted to crawl in a hole and never be seen again.” —Guinevere Christian

“I was leading music for a weekday Mass at Franciscan University when I was a student. I was filling in and hadn’t practiced, so after Communion I was thinking through the last song and how to play it.

Suddenly I realized that it was very quiet and everyone was standing, so I rose and said ‘let us sing our closing song…

To which one Fr. Michael Scanlan, TOR, presider, said ‘AFTER the final prayer.’

“As a kid, I once stole the maracas away from the choir while they went up for Communion. I stand by my decision.” —Nathaniel Wynans

“Years ago I was singing the Ave Maria for a wedding (the first of so many weddings). I thought I knew it pretty well, but in all actuality, I just really knew the first verse pretty well. I was in the wedding, too, and didn’t get to practice with the string quartet beforehand, so I was just winging it. By the time verse two came around, I started panicking because I thought I had missed my entrance, and I started too early and wound up completely butchering all of the Latin and didn’t sing the second half of the second verse.

My seminarian friend, now priest, who was serving came up to me after and commented on my new rendition of the Ave Maria, in which the second verse roughly translated to ‘Hail Mary, Hail Mary, mother pray, pray, pray. Hail Mary.” —Karista Filopoulos

“Had my second service for the day at 6 A.M. (5 A.M. is my first). I fell asleep during the readings, then when I woke up the priest was already delivering his homily. Choir looking at me, giggling. They sung the ‘Alleluia’ in acapella.

Maybe I’m the first musician in the history of the Church that fell asleep while doing my service” —TinTin Sison.

“I played a very grand ‘Amen’ a little early. The priest said ‘That was so nice we will do it again in a few minutes.'”—Rosemarie Jay

“Hearing the cue ‘with the angels and saints’ to start ‘Hosanna in the Highest’, I played the entire thing at the pause, then the priest said, ‘That was very nice … we’re going to do it again in a minute because I wasn’t there yet.’ —George Pappas

“I was singing the Communion hymn, seated on a stool, playing the guitar. The music area is very close to where people who have received walk back to their pews. A couple strolled by and put a note on my music stand, blocking the sheet music I was reading. It said my fly was open. Yeah, I couldn’t really do anything about it just then. I managed to keep singing while I briefly stopped playing to knock the note off my music stand. I continued the rest of the song as normal. Well, normal, except for my fly being open” —Mike Liversidge

During the first Mass that I was ever asked to lead music for, I was apprehensive and feeling unequipped to start. I was already uneasy. I remember starting the Gloria before the Kyrie. When I began the first chords to the intro (full band in tow), the priest shouted into the mic, ‘No, not yet!’ Oof. Not my finest moment, but I haven’t started a piece early since.” —Kate Baumer

“Father had just started his homily, and as I reached to turn to the next piece of music, my binder fell onto the keys of the organ—it was a very loud surprise.” —MyLinh Daley

“Sneezing so hard into an old mic that the snot liquid crackled through the rest of the song.” —Joseph Traverg

“The first wedding I played the organ for, I had the sheet music for Ave Maria in the wrong order. While singing it during the signing of the registers, the soloist had to stop me midway—being completely thrown off by my mistake and I, not realizing, was soldiering on having left out a page of music. We had to restart from the beginning. I’m sure the bride probably still bears a grudge, as it was all caught on video.”—Gregory Mitchell

Like a good parent, surely God smiles even when we mess up while trying to express our love for him. We should always aim to give him our best, but these shared comments are great reminders that we are human, and they should humble us even more as we come before the Lord to worship him.

Thank you to all who offered their music ministry memories for this request. To read about more embarrassing moments in music ministry, visit the comment thread on our Facebook page here.

Photo by Louis Smith on Unsplash

Music Lifted as Prayer: An Organist Shares His Passion

The 3 Basics of Christian Life