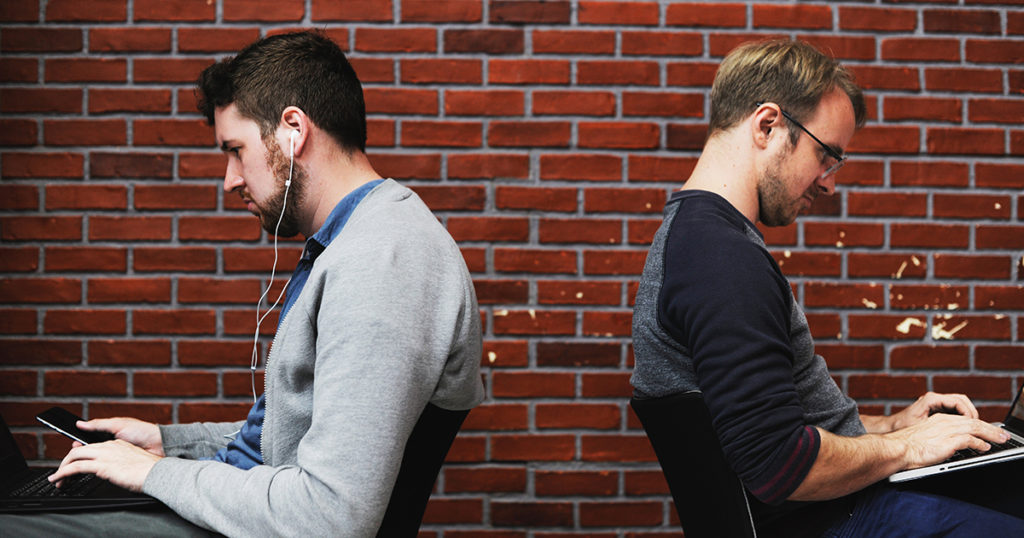 Have talking points killed actual talking? In an era defined by polarization, I fear that humans have abandoned the ability to communicate via exchanging points of view. Recent trends, both in and out of the Catholic realm, seem to have given credence to the argument that soundbites and memorable moments have supplanted thoughtful discussion. Is this actually what people desire, or just what they are given? And is there a way out of this?

Without a doubt, a quick-hitting approach has already overtaken the information we digest. Perhaps this is due to the manner in which modern society consumes information. When people choose to get their news from social media, they essentially choose to receive information from (and send it to) others who think as they do. Further, when the platform limits posts to 280 characters (Twitter), this often removes the possibility of nuance and discussion that leads to an understanding of a differing point of view.

However, the problem does not exist only in the world of social media. Watch any news channel; most networks, based on the stories they cover and the manner in which they do so, do not even try to hide their bias. Many viewers approach news the same way they do social media. They turn on the channel that makes them feel comfortable with their own viewpoints and when there is an attempt to present both sides of an issue, we do not see a reasoned discussion, but instead a split-screen with two people screaming at each other, trying to disparage the other with ad hominem attacks.

When a Win Isn’t Enough

As a sports fan, I notice those like me have been presented with a similar scenario. While the press and media outlets have cut back on the number of investigative reporters or analysts they employ, fans can have their fill of shows which pretty much consist of talking heads loudly arguing about one side or another. In fact, sports media, like all media, seems to have devolved into a way to find a wedge in every scenario. Fans of a team must choose whether they are on the side of a coach or a general manager, the players or the ownership, the starting quarterback or the backup. One wonders whether the media outlets are responding to a demand, or simply taking advantage of a demand they created because creating artificial conflict is cheaper than hiring a staff of journalists who will find genuine evidence and authentic stories.

These mentalities present a problem: they create a distorted view of the goal. Using our sports analogy, a fan may find himself unhappy that the team won if they didn’t win using their preferred player, or if the coach they didn’t like actually called a good game. Similarly, in news or politics, we may find ourselves with one set of priorities when our preferred party takes an action, and the opposite when the other party does the same thing.

Another example of this was found recently when President Trump nominated Judge Kavanaugh for the Supreme Court. One can (and should) examine everyone’s record before deciding that they approve or disapprove of a nominee.  Depending on what side of the aisle one was on, though one sensed that most people either felt that this man was the most fitting person ever nominated for the job, or that he was not qualified to have any position in politics, possibly outside of dishwasher at party headquarters; which one would expect from advocacy groups.

However, when one such group actually released their very passionate opinion of the nominee, they made a mistake: they left the portion of the press release with Kavanaugh’s name unchanged from the placeholder there when they drafted the statement. In other words, they already wrote the entire statement without knowing whom it concerned and would have written the exact same words even were someone else the nominee. This was embarrassing for the group and they got unsurprisingly lampooned online, but make no mistake. Many, if not most—if not all—of the statements from opposite-minded groups presenting a different opinion of the nominee, also were drafted using powerful marketing language to present their support before knowing his identity as well.

How does this relate to the Catholic world? Examine the reactions to the recent news regarding the change to the Catechism’s paragraph on the death penalty. Many responses fell into three categories. Some read the change as more about language than practicality. Another viewpoint revolved around satisfaction that the Church offered clarity on capital punishment in the modern world. Others were concerned that the new language, though more clearly expressing a position on one issue, also offered ambiguous language about morality in general.

These positions were all compatible with healthy, informed debate, and there was some of that. There was also plenty of less healthy debate. Commentators who disagree with Pope Francis on other issues immediately used this as an opportunity to criticize him for the change and infer from it what they thought he was really trying to do.

In many ways, they seem like the group that issued the press release on Judge Kavanaugh. Instead of reading the paragraph as written, they immediately criticized it. Similarly, there were plenty of other people who saw things the opposite way, but instead of focusing on a discussion of what the Catechism said, used it as an opportunity to gleefully celebrate the fact that His Holiness had said their opponents were wrong.

Again, this is not to say that one can’t have questions or concerns about this or any other issue in the Church. However, when discussing them, there is no need to focus on our feelings about the pope, or look for ways to attack those you disagree with. Even if everyone else is addressing their posts like this, there is still no need to. Focus on the topic itself, or don’t post at all. Each of us is just one small part of the social media universe, but perhaps we can move toward a more civil debate one at a time.

Out of Anger, Hope

This leads us to the news about Archbishop (one-time Cardinal) McCarrick. In this story, I actually saw hope with regards to discourse. When the story first broke, it seemed like a few people tried to tie this into ideology, based on where they thought things fell on the spectrum (to the extent that there is a spectrum in the Church. I believe one source of confusion that adds gas to these online fires is the attempt to apply traditional left/right political thought to Church teaching).

However, since people have been able to examine this story, the majority of the response has been one of anger, and demand for reformative actions, regardless of the mindset of the writer. Many who, in the past, have had varying viewpoints as others are coming out saying the same thing. It is a shame that it takes such hurt and tragedy to bring this out. However, if people can see this as something that transcends their bubble and is bigger than their own viewpoint, maybe they can see this about other issues as well.

That is our challenge. All media, including social media, offer more people than ever the opportunity to engage in debates and be heard. But ask yourself a few questions before jumping in, since your voice can now be heard by so many. Is what I say helping? If I feel moved to address a topic, will my point focus on the topic, or a person (be they someone with whom I agree or disagree)? Am I doing this to add a new perspective, or just to reiterate what was already said? Even worse, am I doing this because I thought of a great comeback to “own” someone? And most importantly, can I honestly say that by adding to this conversation, I am doing so for the greater glory of God?

Weeds Among the Wheat: Donatism and Why I’m Still Catholic