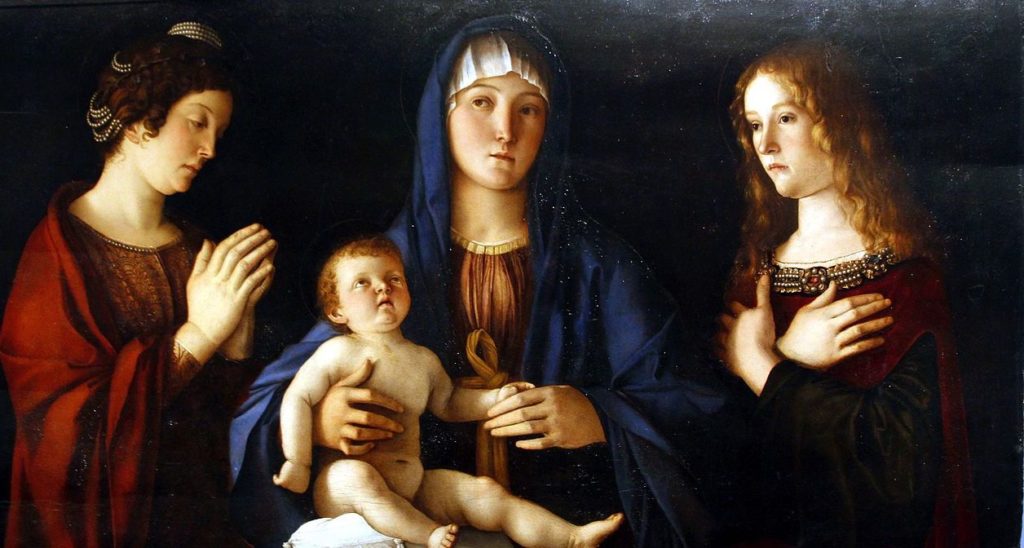 Not having been raised Catholic, I can relate to the question that is often asked, “Why do Catholics pray to Mary?” A good way to respond to someone asking that question is to first explain the Catholic understanding of the Communion of Saints.

People questioning the idea of praying to a saint perceive that those who are dead in Christ are disconnected from those on earth, so to pray to someone who is dead seems like a useless proposition. Non-Catholics are quick to pray for one another, but to pray for the dead or ask the intercession of those who are dead is not only foreign, it’s a bit suspect.

So in order to explain why we pray to Mary and the saints, we need to explain that there is a connection between the Body of Christ that is already in heaven and those who are still on earth. Though a person is no longer living on earth, that does not mean they are not living. We have a relationship with those who are living in heaven, and that during the Mass heaven and earth connect.

Once that difference is explained, you can make the connection that praying to Mary or the saints is like asking a friend here on earth to pray for you. Catholics also believe that a saint in heaven has a better connection to Christ, since they are right there with him.

Part of the problem of explaining the communion of saints to non-Catholics is that the Bible that they use does not have the books that mention praying for the dead and asking for the intercession of angels, so trying to quote those Scriptures will not be accepted.

However, there are some verses in Revelation that talk about the prayers of the saints. For example, Revelation 5:8:

And when he had taken the scroll, the four living creatures and the twenty-four elders fell down before the Lamb, each holding   a harp, and with golden bowls full of incense, which are the prayers of the saints.

Of course for those in heaven, there is no need for prayers, so the prayers of the saints are for those on earth. If saints are praying for us, why not implore them with something specific? That is how we on earth ask each other. If the Body of Christ is not separated, then it would be wrong to say we can’t ask members of the Body of Christ in heaven to pray for us, because that would be a denial of the unity of Christ.

It can also be helpful to point out the role of Bathsheba in the Old Testament as the Queen Mother to Solomon, who interceded for people on their behalf. So too the Queen Mother of heaven can intercede for us.

Romans 8:35-39 talks about all of us being together in the love of God. If nothing can separate us from God’s love, how can we be separate from one another who are held together in God’s love?

In Mark 12:24-27, Jesus talks about the resurrection and proclaims that God is a God of the living, not of the dead and that Abraham, Isaac, and Jacob still live. This Scripture verse reinforces that those who die in faith are not dead. If they are not dead, then they are part of the kingdom of heaven, which is both in heaven and on earth. And so it follows that if we are connected, we can ask for the prayers of those in heaven who are part of God’s kingdom.

So once you can show people that it is biblical to pray to the saints, then you can easily point out that since Mary is the mother of Jesus, surely she can intercede for us as well.

It is a great blessing to have a host of heaven to pray for us as we labor and struggle here on earth.

Is Jesus the Only Mediator?

How Being Thirsty May Deepen Your Prayer Life

Psalms: Prayers from the Heart of a King

Mary: A Biblical Walk with the Blessed Mother [Study Program]

Emily Cavins received her bachelor of arts degree in classical and Near Eastern archaeology from the University of Minnesota. She is a tour leader of annual pilgrimages to Israel and other Bible-related destinations. Emily is also the developer of the  Bible study resources, and co-author of The Great Adventure Storybook. She co-authored the Walking Toward Eternity Bible Study Series, Part One (Daring to Walk the Walk) and Two (Engaging the Struggles of Your Heart) with her husband, Jeff. Some of her other work includes: Great Adventure Kids, Lily of the Mohawks: The Story of St. Kateri, and Catholic Family Night, a series of lessons covering all three liturgical reading cycles with one lesson per week throughout the entire year.

Emily lives in Minnesota with Jeff, her husband of over thirty years.

This blog post first appeared on The Great Adventure Blog (biblestudyforcatholics.com) on June 17, 2015. Find out more about Great Adventure Bible studies here or by clicking the banner below: