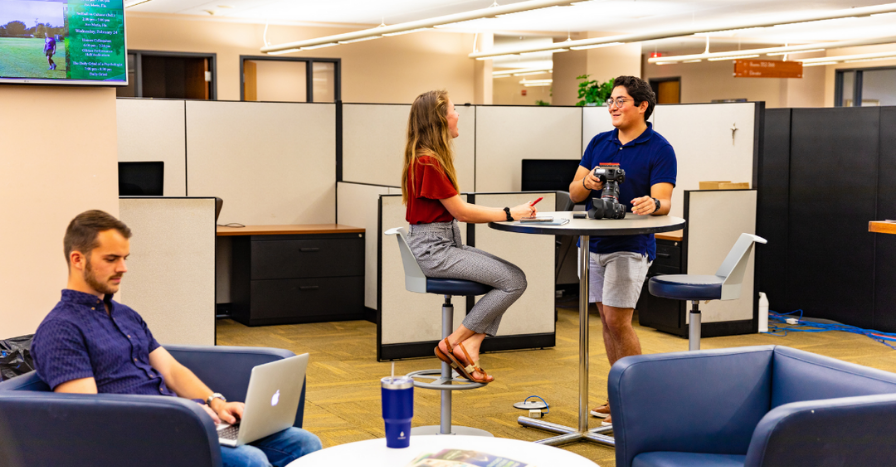 From Our Sponsor, Ave Maria University

The Catholic Church was founded by Jesus Christ to bear salvation to all men. Like St. Paul, the Church is ruined if it does not meet this obligation (1 Corinthians 9:16). While many translate this to mean we need more priests, nuns, and theologians, and I certainly do not want to diminish that conclusion, I do, however, want to propose another perspective. The Church, and thus the world, is crying out for great Catholic communicators.

Today, there are more communication tools at our fingertips than at any time in human history. The internet, cell phones, and social media have all launched or come into their own in the last 20 years. These tools make connecting instantaneous. They not only serve to reach people, but to entertain, inform, and influence them. Therefore, to be a great Catholic communicator requires one possess the skills necessary to employ these tools for the advancement of the Kingdom. They also demand one understands how these tools work together to achieve “convergence.” Convergence consists of integrating messages across a variety of access points in order to achieve a cumulative effect.

The concept came into focus for me years ago, as I thumbed through my local newspaper.

An advertisement caught my eye that read, “Win a FREE Harley Davidson.” The offer came from a casino giving away one Harley Davidson motorcycle a week for six consecutive weeks.

I’m not much of a gambler, and in full transparency, have never owned a motorcycle or rarely even ridden one. If I did, I’m sure my favorite companion would be my local priest who would be on stand-by for last rites. Nonetheless, I pictured myself astride that beautiful machine. As I drove to work that morning, the same advertisement caught my eye on a billboard next to the highway. When I arrived at work, I stumbled across several social media advertisements promoting the giveaway and using the same graphics. The following evening, I sat in my car, stuck in rush hour traffic, listening to an announcer broadcast the giveaway live. The caveat was, you had to be present to win.

Suddenly, I felt a strange gravitational pull. If I go right, I continue on my path home. If I go left, I can be at the casino in 20 minutes, be a last minute registrant, and quite possibly, be the proud owner of a shiny, new Harley! Although there was a brief internal struggle, I chose to continue on my path homeward, but not before the power of convergence was realized. A number of messages had been delivered to me over a short period of time, prodding me to visit the casino, and it nearly worked!

This, despite the fact I’m neither a gambler nor a motorcyclist!

Convergence is crucial today because we’ve all become hardened listeners. Bombarded with messages, it’s much more difficult for a single medium to move us to action. Previously, a person could graduate college with a communications degree, become an expert in a single medium (for example, print), and likely reside there for the duration of their career. This is no longer the case. A news reporter with 30 years of experience interviewing and writing news articles is now required to bring along a camera for videotaping, post the story on a web page, write an enticing, clickable headline for social media, and perhaps, gather a number of sources around a topic so as to host a future podcast.

Convergence is the way of communicating today and while college students inherently know its value because they were brought up in this environment, colleges themselves have been sluggish to adapt.
This was the conclusion of a recent virtual webinar sponsored by Adobe and The Chronicle of Higher Education. They found communication to be a “durable” skill leading industries would seek talent in because it can’t be replaced by automation. To highlight how colleges could innovate to meet tomorrow’s job market demands, they profiled a student who in her first year writing course, learned how to tell a story using mobile app, podcast, website, film, and magazine. By doing this, the student was able to identify gaps in her storytelling and perfect her product.

In an effort to help form great Catholic communicators, Ave Maria University will be launching The Convergence Lab.  In this lab, a student will be exposed to all mediums—print, online, direct, involvement, and broadcast—so they can see how one activity influences another, and how to coalesce a message for ultimate impact.

This effort will drive student success by augmenting scholastic work, enabling the student to boast of real world experience. Imagine, two job candidates from two different schools, one worked at their college newspaper, whereas the other worked in the AMU Convergence Lab, employing four or five mediums. Which candidate will likely land the job? And, which will be better equipped for the future?

Convergence for the Kingdom

However, forming great Catholic communicators isn’t merely meeting the minimum criteria of preparing students for employment, it harkens to a much deeper, manifest call from Christ and his Church.

“Go, therefore and make disciples of all the nations.” This was a command of the risen Jesus, and it’s the same command the Church perpetually presents anew.

In fact, one of the first documents emerging from Vatican II was Inter Mirifica, the decree on the media of social communications. Reading it today, it seems prophetic. It calls for the laity to make effective use of the media, to create a truly Catholic press advancing the natural law and Catholic teaching, and to be watchful when the media is used contrary to the plan of the Creator, inflicting evil upon society.

Forty-two years after its publishing, St. John Paul II wrote a follow up document, The Rapid Development. In it, he says the Church is “not only called upon to use the mass media to spread the Gospel, but today more than ever, to integrate the message of salvation into the ‘new culture,’” and that “using the techniques and technologies of contemporary communications is an integral part of the Church’s mission in the third millennium.”

And finally, at the center of the Ave Maria University logo is the document Ex Corde Ecclesiae.

Many know this document was also written by St. John Paul II, as he expressed concern for the life of Catholic universities. The document describes what an authentic Catholic university should look like, who it would hire, and how it should display it’s fidelity to the Church in its everyday life. However, an often overlooked part of the document recommends “that by means of appropriate studies, the impact of modern technology and especially of the mass media on persons, the family, and the institutions and whole of modern culture be studied deeply.” To deeply study the impact of the media on persons, one must know the inner workings of convergence. Once you grasp the concept, see convergence in action, and recognize its ability to influence men, you’ll realize there is much work to do in communicating the Kingdom.

To find out how you can support or be involved in The Convergence Lab, contact Kevin Murphy at 239-304-7918 or Kevin.Murphy@avemaria.edu

Editor’s Note: This article is a sneak peek of the Ave Maria University Spring Magazine, out now! To receive the magazine, visit this link.

Communicating the Love of God [Audio]

The Power of Catholic Community