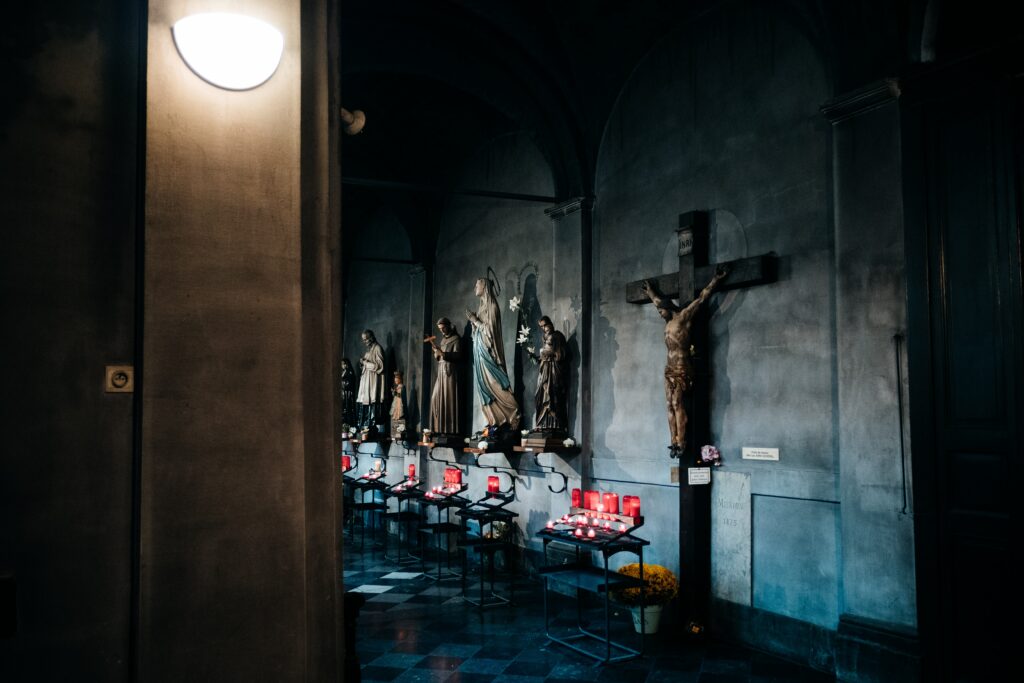 The present situation of the world, with all of its challenges and sufferings, carries at least one benefit: many of us have more time for prayer than ever before. “Moments of reflection” are increasingly part of our daily lives, at least for those of us not working on the front lines or caring for dependent family members.

To grow in prayer, we need masters of the spiritual life to guide us. The masters of prayer are the saints. When we investigate the lives of the saints, often themes and patterns emerge, as God reveals himself over and over to willing souls through the ages. This is made vividly evident by the lives of three of the most important Catholic women to live in the last five hundred years: each with the same name, each with a different lesson to teach us about prayer.

St. Teresa of Avila (1515-1582), St. Therese of Lisieux (1873-1897), and St. Teresa of Calcutta (1910-1997) each portray the utter simplicity of what it means to be a disciple of Christ. They all faced tremendous challenges, and they all had their own stretches of spiritual darkness. However, their consistent pledge and foundation was the loving thirst of Jesus and their desire to bring others to his side.

St. Teresa of Avila lived as a Carmelite nun in Northern Spain. She was a tireless reformer who spent decades crisscrossing the Spanish countryside to visit Carmelite convents and monasteries, challenging each one to recommit to their promises of prayer, fasting, and sacrificing for souls. St. Teresa met with much resistance in this work, and God blessed her with a dynamic spiritual life to support her difficult mission. St. Teresa is still known and loved today for her writings on prayer which continue to inspire those on the spiritual journey, from the humblest beginner to those who wrestle with large spiritual powers.

One of my favorite quotes from St. Teresa is an encouragement for those new to the spiritual life: “Many remain at the bottom of the [mountain of prayer] who could ascend to the top…I repeat and ask that you may always have courageous thoughts. As a result of these, the Lord will grant you the grace for courageous deeds.” The key to being a saint is to understand that God is calling us closer to him, which means he wants to bring us up to himself. When we allow him to do that, we are given the virtue of courage because nothing makes us fearful or drowns our faith. Teresa knew and experienced the words of Christ: he thirsts for her to be with him, and she never lost sight of this truth.

Our second spiritual master shared both a name and a religious order with St. Teresa of Avila: St. Therese of Lisieux was born in France in the late 1800s, and she became a Carmelite nun as a teenager just like her namesake. While St. Teresa of Avila had had a mediocre prayer life until encountering the Lord powerfully in middle age, St. Therese of Lisieux died at the tender age of 24, but nonetheless was declared a Doctor of the Church just like her fellow Carmelite, also because of her dynamic writings about prayer.

To explain the love of God the Father for his children, St. Therese used the evocative image of an infant on his hands and knees at the bottom of a staircase, with his father standing at the top of the landing. The baby desires intimacy and proximity with his father, so he desperately attempts to climb the first step. However, the baby is barely able to crawl, so climbing the stairs fails no matter how hard he tries or how badly he wants to reach the top. The loving father sees his beloved child struggling, and quickly runs toward the baby, scoops him up, and brings the child close to his side.

St. Therese explains that this is the central dynamic of the spiritual life: we do not win God’s love or “earn” a better relationship with him by doing “more” or trying harder. Faith is not a contest to see what we can do for God; it is a relationship initiated by a loving Father who sees his children trying to find him, and eagerly runs to lift them up and bring them close to his heart.

Our third spiritual master was named after the “Little Flower” of Lisieux, and embodied the same spirit of childlike trust in her Heavenly Father. Mother Teresa, a religious sister like her namesake, began her life of service as a teacher at an all-girls Catholic school in India. During this time, she received a mysterious “call within a call” to serve Chris in the destitute poor. She was traveling to Darjeeling, India when Christ appeared to her with a special mission. He spoke to her heart simply and earnestly, saying: “I thirst.” Jesus revealed that he wanted her to help quench his thirst for souls in a unique way: by going to serve and love the most vulnerable, sick, and lost. Shortly thereafter, Mother Teresa founded the “Missionaries of Charity,” who would make it their life’s work to live with the poorest of the poor, the lost, and the destitute.

Jesus wants you each to hear Him – speaking in the silence of your heart…Not only He loves you, even more – He longs for you. He misses you when you don’t come close. He thirsts for you. He loves you always, even when you don’t feel worthy. Even if you are not accepted by others, even by yourself sometimes – He is the one who always accepts you…

Mother Teresa teaches us that Jesus’ thirst is not equivalent to saying, as countless people do, simply that “Jesus loves you.”  This phrase is not false, but it does not encapsulate the strength of his words as he hangs on the cross, dying for love of us. On the cross, and still today, Mother Teresa teaches us that Jesus thirsts for us. We must experience these words as spoken to us personally, in order to feel the force with which they were said on the Cross on that first Good Friday.

Our three spiritual masters, each sharing the same name and burning with the same love for the Lord, are thus speaking to us of the same thing: the soul’s journey to God in prayer. St. Teresa of Avila encourages us at the beginning of our journey: “be courageous!  Ask the Lord for great graces!”  St. Therese of Lisieux reminds us that, even as we ask for great graces, God himself is running towards us, doing the “work” to come and meet us in our littleness and our need. And when we are finally united to him, Mother Teresa teaches us that the heart of this mysterious union is his burning “thirst” for us: a divine desire that calls us towards God on earth and will only be fully quenched when we are united with him for all eternity in Heaven.

Once we hear and experience these words as meant for us, we will come to realize that God stops at nothing in order to get close to us. He is thirsting, in fact, he is dying to be in a deeper relationship with us. Amidst all of the challenges and difficulties of these “unprecedented times,” let us also commit to “unprecedented prayer.” Let us look to God’s thirst for each of us, and be moved to pray like never before.

Feed Your Spiritual Life in Just 25 Minutes a Day

Get the free reading plan!

How Mother Teresa Set the World on Fire [CFR video]

Doctors of the Church Part 3: St. Teresa of Avila [Audio]