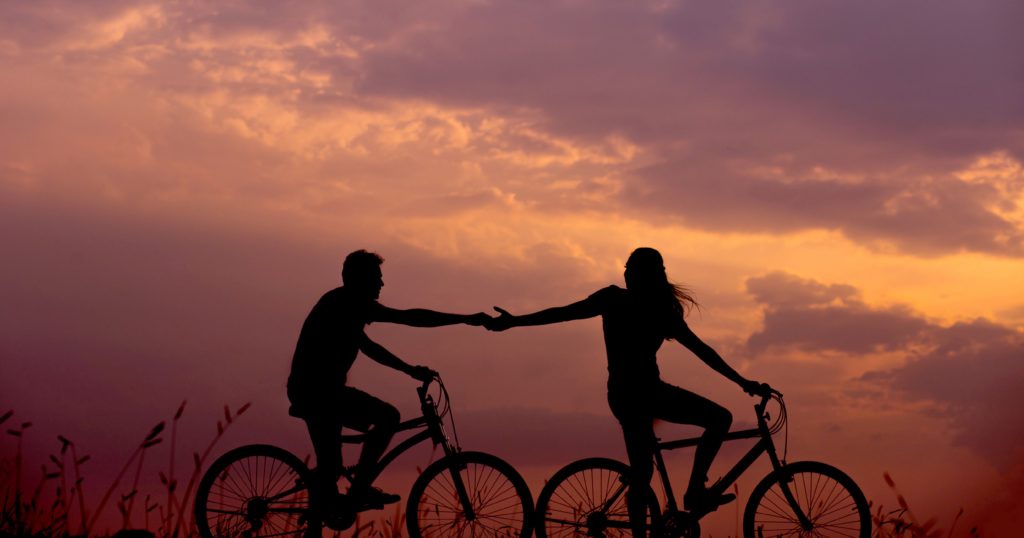 No longer just a snappy line from Pokemon, these words now shoot me back to the time of my best friend’s unraveling—when the truth of how he felt about me struck him with insight so clear and force so powerful that it led him to offer his life and his love to me right then and there in the middle of my living room.

Unsurprisingly, such an impulsive pseudo-proposal didn’t last. Within a day, he backtracked, and before I knew it, he was gone. Out of the city. Out of the country. Out of my life.

But his parting words still beg the question, can we really choose who to love? Does love ultimately boil down to a simple choice?

Often, as far as God’s concerned, the answer to a question isn’t either yes or no, but rather, both yes and no. Love is a choice. And … it also isn’t.

Let’s first consider the negative—that love is not a choice. Such a statement flies in the face of conventional wisdom. It seems that all over the Catholic blogosphere, well-meaning individuals are reciting this well-worn refrain: “Love is a choice, not a feeling.”

Long before I met the man who would love and leave me, I took this message on choosing love to heart. But I misunderstood what that choice was all about, and it yielded terrible results. The kind of results that kept me in a relationship devoid of affection, turned initial respect into eventual hostility and led me to the disturbing yet inevitable conclusion that love—the kind of awe-inspiring love that we see portrayed in movies, novels, and music, the kind of divinely animated love that we all desire, having been born of the One who is love—doesn’t really exist.

As disappointing as this erroneous belief was, when confronted with the deceptive half-truth, I obediently bowed my head and accepted the burdensome yoke, wanting to follow God even at the expense of my deepest desires. As a result, I chose a good man, he chose me, and we fought tooth and nail to make it work. But it didn’t. Nor could it ever. Because, as much as we might have wanted to love one another and prove that love is a choice, shunning any suggestion of fate or the existence of—gasp!—soulmates in the process, the simple truth is, we just didn’t love each other. We so desired divine love, and were so fooled by this seemingly divine axiom of choice, that we were willing to seek it anywhere, with anyone. But this is one area of life where the old adage, “fake it ‘till you make it” just does not apply.

In his book, Three to Get Married, Venerable Archbishop Fulton J. Sheen makes a similar point:

The fact of the matter was, though my ex and I were both good people, and though we both sincerely desired to love each other as husband and wife, nothing in the world was going to change the fact that we didn’t have the innate capability to do so. Once we finally realized and accepted that fact, we called off our unintentional charade, and I began to pray in earnest that I might know what it means to love—to really love as Christ does.

With my stubborn insistence on my own will and my mistaken understanding now subdued, God wasted no time in answering my prayer. In fact, his plan had already been set in motion, long before I reached that point of complete surrender. But God being God, he must have seen it coming. It seems that he was quietly at work, just waiting for me to ask in order that he might finally respond.

My best friend entered my life through circumstances that should, by all human accounts, have never come to be. From the first moment of my seeing him, I had the strangest sense that I knew him, a feeling that at first, admittedly, I resisted. It seemed insane to say such a thing about a total stranger, after all! But as time went on, it became abundantly clear that there was something almost tangible linking us together—a connection that we had felt for all our lives and that was only beginning to make sense now that we had finally met; a connection so obvious that complete strangers would stop and call us out on it, even though we weren’t a couple!

How different this was from my earlier experiences! Whereas I had struggled to understand my ex and fought to manufacture some counterfeit semblance of love for him, with my best friend, everything came effortlessly. Far past the point of natural affection, what I felt for him seemed to have sprung up from an eternal source: always flowing, ever new, and without end. Loving him was as effortless as breathing, and just as necessary. I didn’t love him for what he did or didn’t do. I didn’t even love him for who he is. I loved him because he is. As it is with God, whom we ought to love simply because he exists, so it is with the man I love. He exists, therefore, I love him.

Truly, I had loved him before we’d even met, with a love that had been hiding in my heart for as long as I can remember. Such love does, of course, come with its fair share of emotion, but it’s a feeling so sure, so enduring, and so insistent that it quickly grows and matures into conviction. It would perhaps be more helpful, then, to say that love is not just a feeling. It is indeed crowned by the flower of emotion; but just as a flower can’t bloom apart from its stem, that kind of emotion can’t blossom unless it remains rooted in and nourished by unchanging truth.

Once we come face-to-face with all of the humbling beauty and greatness of love personified, we do still have a choice to make.

We Are Born to Love

To be human is to be made in the image and likeness of God, who exists in a life-giving communion of love. In order to live, therefore, we must love, for Love itself is the source of our life!

But there exist two crucial differences between the image and the reality:

This is the kind of love that God intends for us as well, but we, having been blessed with the gift of free will, are not bound as he is to give and to love at all times. Still, as God loves completely, and as we are made in his image, so we too have been made incapable of loving in parts. To once more quote the Venerable Archbishop Sheen:

“Each person has only one heart, and as he cannot eat his cake and have it, so he cannot give his heart away and keep it.”

Who Will It Be?

God wants us to love like he does, as attested by The Catechism of the Catholic Church:

“God who created man out of love also calls him to love – the fundamental and innate vocation of every human being.”

But despite this, he still gives us a choice, because one of the necessary qualities of love is that it is free. No one can be forced to love.

When at last love becomes incarnate in our lives, it is then that love’s choice is revealed. That choice has nothing to do with potential partners, but everything to do with the perennial struggle between love and fear.

The choice that love presents to us, then, is whether or not we will accept this mission—whether we will lean into this vocation, accepting it despite the potential risks that come with such complete self-sacrifice and vulnerability, or whether we will refuse God’s invitation in order to protect ourselves from potential hurt.

So, whom will we love? To whom will we offer our all? Will it be the unique, unrepeatable person through whom God chooses to reveal the truth of his love for us? Or will it be ourselves?

A Risk Worth Taking

Love is God’s plan for our lives. But we live in a fallen world, where loving without reserve or regard for ourselves is a very difficult thing to do. It requires that we be open and vulnerable. It requires that we give of ourselves without limits. And it also comes without the guarantee of reciprocity. But despite the risks, still we are called to love.

When it came right down to it, well-intentioned though he may have been, the man I love ultimately chose to love himself. But despite the hurt that his decision has caused, I don’t regret my choice to love, nor will I ever revoke it, because it’s brought me so much closer to Christ, arms outstretched on the Cross, love pouring forth in an undeniable torrent. It’s a scene that once confounded me, but that now makes perfect sense.

“If this is what it takes,” Jesus seems to say, his words echoing those whispered by my own pierced heart, “Then this is what I’ll do. I have no choice. This is how much I love you.”

The completeness and freedom with which Jesus loves us leaves him incapable of choosing any alternative other than giving us his entire self. In so doing, he entrusts to us the supreme example of what love is. It is at once choice and obligation. It is both a free gift and a sweet constraint. It is passion. It is a sacrifice. And it is, above all, a risk worth taking.