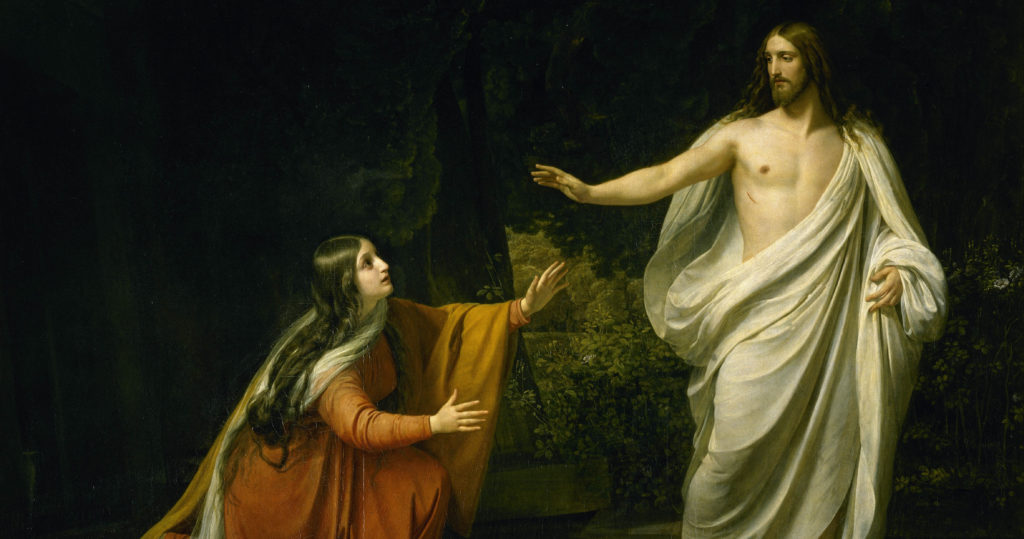 Stop binge-watching Tiger King and start watching The Chosen! While it is the largest-ever crowdfunded TV show and free on YouTube or through the app, it is still flying under the radar for most Christians since the first season’s release last year. That’s a shame. It is a masterful, transfixing, faithful yet not low budget or corny new TV drama on the Gospels planned for eight—yes, eight!—seasons.

Directed and co-written by a passionate evangelical Christian Dallas Jenkins, the series intends to support the truth of Sacred Scripture even while using fictional details to help viewers see Christ through the eyes of his original followers. It makes no qualms about its evangelizing purpose, yet the storytelling isn’t compromised, nor the cinematography stilted.

Certainly shaped by evangelical emphases, so far, the show is quite Catholic friendly. Fr. David Guffey, C.S.C. is a consultant and the actor who plays Jesus—Jonathan Roumie—is an outspoken Catholic who says it’s an honor to portray the one with whom he’s had a “personal relationship with [his] entire life.” But more than this, season one has some bright spots for Catholics, including affirmations of Peter’s singular leadership and Mary’s intercession. I’ll link to the scenes on YouTube so readers can become viewers of this series and see for themselves how promising it is.

Jesus Is the Messiah

There is no question that Holy Scripture is a grand historical story (see the Bible Timeline). It spans millennia and addresses the universal human experience. Yet it is not written like The Lord of the Rings. The plot of Scripture is often obscured by its archaic and diverse presentation. No one has been able to bring to the mainstream the epicness of Scripture. That is, until The Chosen.

One of the things this series does so well is root Jesus in the Old Testament. The Jesus of The Chosen is not a cryptic teacher, generic philosopher, or cheesy therapist, but the Messiah foretold in the Jewish Scriptures. Characters wrestle with their plight in biblical terms and episodes often begin with flashbacks to previous eras of the Old Covenant. Brilliantly, the series portrays Scripture like Scripture reads itself. It makes connections between two seemingly different events in the Bible through allusions or echoes. It’s like a crash course in biblical typology and interpretation.

For example, the season finale begins with Jacob digging his famous well. A neighbor approaches and a conversation about the God of Israel ensues. The neighbor asks to see an idol of Jacob’s God, to which Jacob responds that the God of Israel cannot be represented in an idol. “So he’s invisible?” the neighbor asks. This vignette sets up the climactic moment of the episode from John 4 when Jesus encounters the woman at the well. When she asks whether God is to be worshipped on Mt. Gerizim or Mt. Zion, the prelude sheds light on what Jesus means when he says God desires to be worshipped “in spirit and truth.” It’s features like these that will enable the show to not only refresh your relationship with Christ, but enrich your reading of the Bible as well.

The evangelical perspective of the series’ creators is especially felt in the show’s emphasis on having a personal relationship with Jesus. Yet, The Chosen does a great job exposing the sweet tender-heartedness yet lordly commanding presence of Christ. It’s due to Jonathan Roumie’s brilliant acting as much as the addition of fictional backstories for the apostles which make the biblical world so personally relatable.

The personal claim of Christ is sounded in the first episode. St. Mary Magdalene is portrayed as a troubled, traumatized, and demonically tortured woman who is on the verge of drowning herself, whether by jumping into the sea or by drink. She’s lost touch with her true self and has changed her name to “Lilith.” When Jesus intervenes, he calls her by her real name and recites Isaiah 43:1 which, earlier in the episode, we saw her sickly father teach her to recite when she’s scared. In just a few frames, the writers deftly and powerfully express the existential power of biblical prophecy, the compassion of Christ, and the way in which salvation is, among other things, a return to innocence and one’s true self.

I was utterly undone when St. Matthew catches Jesus after the healing of the paralytic. Jesus turns around and gazes at him with such a soul-searing look that even writing about it now gives me shivers. Indeed, the actor and director see this as one of the many moments when the Spirit was at work in the show.

Although there is nice anthropology at work, which sees the link between the material, social, and spiritual dimensions of the human person and God’s salvation, a Catholic may have brought out other dimensions of divine grace that wouldn’t be on the radar for an evangelical. So far, the only concern I have with the theme of a personal relationship is how it could be used to dismiss the sacramentality of salvation.

For example, let’s return to the aforementioned scene of Jesus and the Samaritan woman at the well. I grimaced a bit when Jesus explained his claim that his followers will worship God no longer in a temple but in “spirit and truth” as meaning “only the heart matters.” In this scene, the writers’ biblical theology isn’t robust enough, for they miss the way in which Jesus’ body is the new Temple (e.g. John 1:14) and, as Catholics well know, Christ offers us his Body in the Eucharist. Jesus’ statement must be understood in terms of the New Covenant transformation of the Temple from a physical building to Christ’s body. It’s not just worshipping Jesus “in our heart,” but, importantly, where his Body is given for us in the Church and her Mass.

Another praiseworthy attribute of The Chosen is its recognition of Jesus’ divinity. It’s true that the series highlights Jesus’ humanity, showing him cook himself a meal, bind a wound, sleep in, and stretch. But his divinity is likewise presented, even if more transcendentally. When Nicodemus fails to cast out the demons from Mary Magdalene, he recognizes that only God could. Since Jesus performs the exorcism with great ease, the viewer is left with the implication that Jesus must be God.

A more profound instance of the show’s rendering of the unity of Jesus’ humanity and divinity occurs in a scene when Jesus asks a group of children who have happened upon his campsite to recite the Shema. As he hears the prayer, the camera zooms out and there seems to be a doubling of the audio, which gives the impression that he is hearing the children pray both as a human and as the God to whom they are praying. And when the children say “I am the Lord your God” the frame returns to a close-up on Jesus.

Many modern depictions of Jesus depict his sensitivity as softness. But even if The Chosen gives great attention to women, it hasn’t yet sacrificed Jesus’ masculine traits to appease feminist society. Jesus is as courageous as he is compassionate here. Take, for example, the way The Chosen depicts the healing of the paralytic. There is a striking contrast between Jesus’ affectionate declaration “your faith is beautiful” to the woman who asked him to heal her friend and his decisive dismissal of the Pharisee Shmuel who challenges his authority. He looks at Shmuel scornfully before boldly forgiving and healing the paralytic. When Shmuel calls for Romans to seize Jesus, Jesus leaves not fearfully but steadily, not to escape but to not prematurely enter his Passion.

In the season finale, after Jesus told the Samaritan woman he was the Messiah, Peter, who up to this point has been a rascally fighter pushing Jesus to get started with his ministry, asks “So it’s time?” When Jesus says yes, they make their way to the next town swaggering like those on a mission. They come to bring trouble, sings the fight-song-like soundtrack that plays over the scene.

Catholics will be disappointed—though not devastated—with The Chosen’s portrayal of the Blessed Mother. It’s a bit of a mixed bag, and it’s understandable that this would be an area of weakness for a show written by evangelicals who miss the way in which Scripture itself portrays Mary as the New Eve, Ark of the Covenant, and the Queen Mother of God’s Kingdom (Dallas, if you’re reading this, please pick up a copy of Brant Pitre’s Jesus and the Jewish Roots of Mary). In The Chosen, Mary lacks her visionary and queenly serenity, appearing rather flighty and immature (I’m sure both the actor and the writers were trying to bring out that she’s a young woman from a humble town).

Yet, Catholics can celebrate what, in my view, is a clear affirmation of her integral and intercessory role in Christ’s salvation. In another arresting scene, when Mary asks Jesus to help with the wine at the Wedding of Cana, the frame switches to a close-up of her face and the audio goes silent as she whispers “please.” It not only highlights the intimacy between Jesus and his mother, but it has the feel of heavenly intercession.

While there’s a lot more that we could examine—such as the role of women, the view of grace, the nature of biblical interpretation, the treatment of the Pharisees and Jesus’ Jewishness, and the character of Nicodemus which intriguingly is the most embellished—hopefully this little review whets readers’ appetites to tuck in for themselves.

The Chosen brings the Gospels to life in an unrivaled and theologically robust way. I’m sure viewers will join me in giving thanks that these actors, directors, designers, cinematographers, and screenwriters provided a long overdue bingable biblical TV series.

Jesus: The Way, the Truth and the Life [study program]

Dr. James R. A. Merrick is a lecturer in the theology department at Franciscan University of Steubenville, Senior Fellow at the St. Paul Center for Biblical Theology, and a theology and Latin teacher at St. Joseph’s Catholic Academy in Boalsburg, Pennsylvania. In addition to Ascension, he writes for Exodus 90 and National Catholic Register. Follow Dr. Merrick on Twitter: @JamesRAMerrick.

This article was first published on the Ascension Blog April 27, 2020.