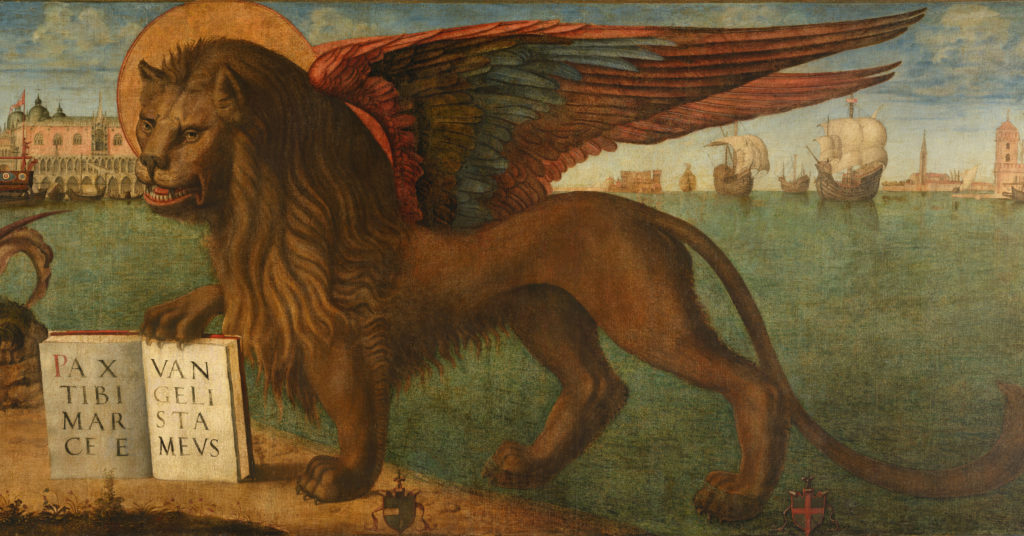 For many Christians, it’s no surprise that the Gospel of St. Mark is a favorite of the four accounts. Perhaps the reason is that it’s the shortest! Perhaps in confession, or in a homily, you’ve heard a priest tell you that you should make a concerted effort to read the Scriptures more, especially starting with the Gospel, and invariably the main suggestion is the Gospel of Mark due to its brevity.

But far from blowing through the Gospel to read it as quickly as one can, St. Mark’s Gospel actually lends itself toward a deeper reading, particularly on the subject of the divinity of Jesus. I can say that a close, spiritual reading of the text actually might take longer than reading one of the three other Gospels, because there is so much under the surface!

On this feast day of St. Mark, we should avail ourselves of the opportunity to learn more about him so as to ask for his intercession more often, while also looking at what this great saint is telling us about the greatest moment in history, the Incarnation, which might not be so obvious at first glance.

Not much is known of St. Mark’s early life, but we do learn from Scripture that he was the cousin of St. Barnabas (Colossians 4:10), and is traditionally identified with John Mark in the Acts of the Apostles (Acts 12:12, 25). We see in the subsequent chapter of Acts that St. Mark helped St. Paul and St. Barnabas in their ministry, but he is also traditionally identified with St. Peter, whom the Prince of the Apostles refers to as “my son Mark” (1 Peter 5:13), indicating that he may have even baptized him. St. Irenaeus of Lyons, writing at the end of the second century, points out that St. Mark is “the interpreter and follower of Peter”. It is entirely possible, then, as the tradition attests, that St. Peter himself dictated the account we see in the Gospel to St. Mark himself.

Another fascinating consideration is given to the identity of the young man who followed Jesus after his betrayal and arrest, who many hold to be none other than St. Mark himself:

“And a young man followed him, with nothing but a linen cloth about his body; and they seized him, but he left the linen cloth and ran away naked.”

No mention of this young man is made in the other Gospel accounts. Even if St. Mark is to be identified with this young man, we have no reason to dismiss the tradition that St. Mark wrote his Gospel with the assistance of St. Peter. The Ignatius Catholic Study Bible makes the following note on this particular verse:

“[The young man is] an unnamed witness that many scholars identify as Mark. If this is the case, the evangelist chose to remain anonymous in light of the episode’s embarrassing details. Ultimately, how we identify this individual has little bearing on the tradition that Mark wrote the second Gospel as a summary of Peter’s preaching, since he could have witnessed the arrest of Jesus without being an eyewitness to his three-year ministry.”

Like many early Christian saints, an apocryphal “Acts” of his martyrdom exists, but it contains elements that are consonant with the tradition of both the Eastern and Western lungs of the Church. St. Mark is credited with heading the Church in Alexandria and bringing the Gospel there initially. To this day Coptic Christians, both Catholic and Orthodox, recognize St. Mark as the first patriarch in the year 42, as recorded by the Church historian Eusebius.

In any case, Butler’s Live of the Saints affirms that “it is quite probable that St Mark did end his days as bishop of Alexandria, [but] we can put no confidence in the ‘acts’ of his supposed martyrdom.” Despite this, the account of St. Mark given in the Roman Martyrology highlights some of what has been passed down from those “Acts”, while still mentioning the widely agreed upon understanding that St. Mark did indeed found the Church in Alexandria:

“Blessed Mark, evangelist, disciple and interpreter of the Apostle St. Peter… wrote his gospel at the request of the faithful of Rome, and taking it with him, proceeded to Egypt and founded a church at Alexandria, where he was the first to announce Christ. Afterwards, being arrested for the faith, he was bound, dragged over stones and endured great afflictions. Finally he was confined to prison, where, being comforted by the visit of an angel, and even by an apparition of our Lord himself, he was called to the Heavenly kingdom in the eighth year of the reign of Nero.”

The eighth year of Nero corresponds to the year 63, and St. Mark’s relics are currently venerated in the basilica sharing his name in Venice, where he is also the patron saint. The details of St. Mark’s life, however, are often overshadowed (and rightly so!) by the Gospel that he has written and given to us Christians living in the present day. As I mentioned above, even though his Gospel account is short, it is packed full of moments that can be especially profitable for us when we engage in Scripture study or lectio divina. One of my preferred things to consider when reading his Gospel account is how the evangelist reveals the divinity of Christ. Critics, including Scripture scholars that have lost the Faith, claim that the Synoptic Gospels do nothing in the way of proclaiming the divinity of Christ. This is demonstrably false, as Dr. Brant Pitre in his book, The Case for Jesus observes:

“This secrecy [about His divine identity] does not mean that Jesus never taught that he was God; it just means that he did so in a strategic way, by using riddles and questions designed to reveal his identity to those who were open to believing and to conceal his identity from those who would oppose him.”

So far from remaining quiet on the subject, Jesus does indeed reveal his divinity throughout the Gospels, and not only in the Gospel of John as some purport. For those that do not oppose him, Jesus is fine revealing his identity, and sometimes does not even see the need to do so in a riddle or question, but through more extraordinary means. Briefly, I’d like to share my three favorite instances of this revelation in St. Mark’s Gospel for reflection in your own prayer and study on this particular Gospel account. Like I mentioned, St. Mark gives us a short text, but a lot to chew on once we take the time to meditate!

After feeding the five thousand people the loaves of bread and fish, our Lord makes the apostles cross the Sea of Galilee as he dismisses the crowd. That night, the apostles become terrified, seeing a figure coming across the sea that they think is a ghost. In fact, the figure is Jesus himself, and he consoles them:

Jesus gets into the boat with the apostles, leaving them “astounded”.

There are two things to note here regarding our Lord’s divinity that St. Mark is trying to tell us. First, the apostles see Jesus doing something that only God is said to be capable of. As the Book of Job recounts, it is God “who alone stretched out the heavens, and trampled the waves of the sea” (Job 9:8).

Second, if God is the only one who can trample the waves, Jesus makes this explicitly clear in his greeting to the disciples. The phrase “it is I” can also be translated as “I AM”, which is the same name that God revealed to Moses (Exodus 3:14). This is because when reading the original Greek text of Gospel, the words rendered are “egō eimi”. This literally translates to “I AM”, which is used as the divine name. Jesus here declares that he is God by taking the name himself.

This next selection also takes place at sea, and is the famous episode where our Lord falls asleep on the boat during a storm, leaving the apostles to ask him, “Teacher, do you not care if we perish?” Jesus at once is awoken and rebukes the wind by speaking to the sea, simply uttering, “Peace! Be still!” The wind comes to a halt and the apostles are “filled with awe”. Again, we must look to the Old Testament to see what Jesus has done. The Ignatius Catholic Study Bible illuminates what happens here:

“Jesus manifests his divinity by exercising authority over nature. According to the OT, God alone has the power to subdue the raging seas (Ps 89:9; 93:4; 107:28-29). This biblical background alarms the disciples and prompts their question, Who then is this…? (4:41).”

Indeed, Psalm 89 reads, “Thou dost rule the raging of the sea; when its waves rise, thou stillest them.” The apostles know full well that no mere man can still the seas. At this moment, the apostles are able to come to a closer understanding of just who exactly Jesus is.

Earlier in the Gospel, we see the famous encounter of Jesus with the paralytic and his friends who, due to their deep faith, cut a hole in the roof of the house Jesus is staying in! After the man is lowered down, Jesus says, “Child, your sins are forgiven” (2:5). The scribes question Jesus asking “Who can forgive sins but God alone?” and accuse him of blasphemy. But note that the scribes don’t say this out loud, but only “in their hearts”.

As the forgiveness of the man’s sins cannot be physically seen, Jesus heals the man of his paralysis so as to show that what has been done to the body (its healing) has already been done to the man’s soul. The scribes are incensed that Jesus would dare to forgive a man’s sin as the Old Testament Scriptures (see Isaiah 43:25) show that only God can forgive sins. The scribes also probably had in mind Psalm 103 which reads:

“Bless the Lord, O my soul, and forget not all his benefits, who forgives all your iniquity, who heals all your diseases … ”

The scribes apparently miss the second part on diseases when accusing the Lord of blasphemy in their hearts. Jesus displays his divinity by forgiving the sin and healing the disease. What’s more, our Lord also shows his divine nature by reading the secret thoughts on the hearts of those same scribes.

As we can see, we owe a great debt of gratitude to St. Mark for recording the words and actions of our Savior, Jesus Christ. Even though the details of St. Mark’s own life may be fragmented and shrouded in some deal of mystery, we can safely assume that he would be happy to, as St. John the Baptist did, decrease so that the Lord might increase. This is what all the saints do; they merely reflect the glory of our Lord and God so he may be known to all the world. St. Mark, pray for us!

The Gospel of Mark and Spiritual Warfare

Matthew: The King and His Kingdom Bible Study Program

St. Mark's Action-Packed Gospel
It's the National Day of Prayer, Not of Thoughts and Positive Vibes
Satan Is Strong but Jesus Is Stronger
Weekly Roundup of Ascension's New Free Content
Has Ascension's free media strengthened your faith?
You can now offer ongoing support for this content with a recurring gift.
Support Ascension