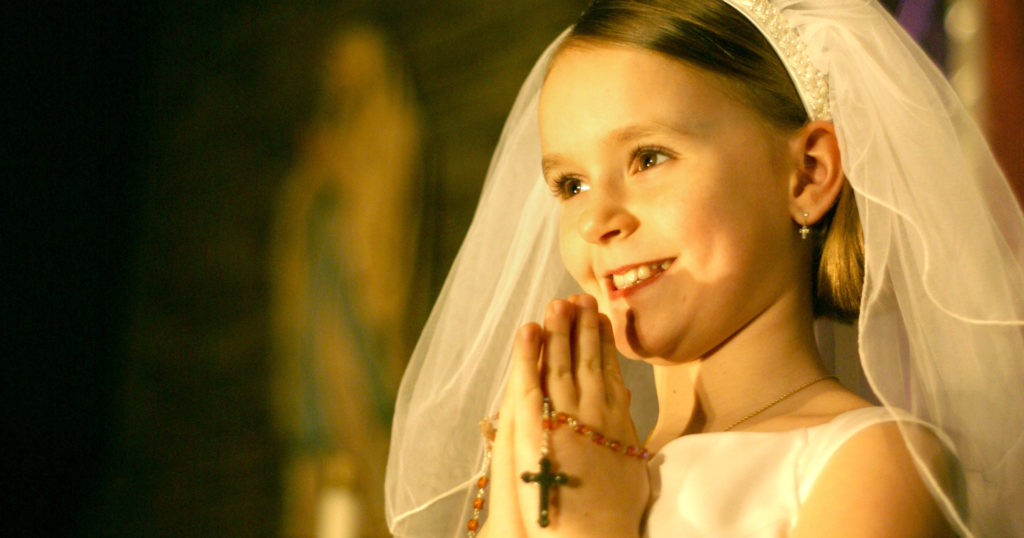 If I were to write the story of my daughter’s First Holy Communion, it would have followed an expected pattern. Predictably traditional, a beautiful, hurried, and busy day with dozens of little girls in white, extended families filling the church building, packed pews and photographs, and celebratory cake in the hall. A large gathering at the house with more family, friends and neighbors, gifts, and reminders for thank yous to follow. A lot of cooking and cleaning and noise.

But a pandemic changes the rules and while it formats scenes off the traditional template, it waylays expectations in completely unexpected ways. In the greatest of plot twists, a quite different script was written for us.

The white dress, passed down a generation, was fixed and in place, white patent leather shoes with a half-inch heel slipped onto little feet, a wreath decked out in faux florals attached to the veil my sisters and I had worn many years before was set upon dirty-blonde curls. Her aunt slipped a new bracelet on her right wrist, her brothers’ collared shirts were tucked and re-tucked and the baby grabbed at the lace flowers and satin bows with wet, one-toothed smiles.

We had anticipated a full pew of family and friends, but were limited to two. We had expected a rushed early arrival followed by what would seem an age of waiting. Instead we had a fifteen-minute window to enter and sit, allowing the cleaning crew time following the 9 a.m. Mass.

Pews sectioned off by thick white cord, piano music with no vocals, blue x’s taped to the floor at six-foot intervals and whispered reminders to “space out.” And masks. On the first communicants, on us the parents, on the priest as he handed out communion. No lingering for photos, no formal gathering in the hall, no holy water, no blood.

There were three choices for dates, spread out over the summer. They were offered to us suddenly on a Sign-up Genius as a first-come, first-served basis after weeks of rising numbers and state-issued orders. I wrung my hands over the restrictions, rather than bringing it to God and laying it at his feet.

The vision was quickly fading and we discussed waiting until the church was once again a place of full celebration, when we could invite extended family, friends, and neighbors, when we would be safe to truly gather.

Then we realized this was it, this was and is the full celebration of the Church, surviving pandemics and wars, fallen leaders, and persecution. The sacraments, ongoing and living and breathing life into the dead and making the old new. The sacrament was the celebration, blessed and holy, and unifying us in our faith as Christians. And whether we sat many or few, we were one body.

The Beauty of Sacred Tradition

It certainly wasn’t our plan. But his plan is better and his plan is always good. And we, the faithful ones, must rejoice in good things (2 Chronicles 6:41), especially today, when we are separated from those we love, when much of our community consists of online gatherings, when service is limited to distanced giving.

The value of the day, the beauty of the sacrament was just as sweet and joyful in a quieter, smaller way. My daughter’s hand slipped into mine was an unexpected gift, as families stayed together during the Mass. The service was simple and honorable, keeping in line with the feast day of its beloved St. Benedict and his simple rule. A two-thousand-year-old sacrifice that time has never defeated was made new again in young hearts.

She walked the aisle breathlessly, taking time to bow her head, say her “Amen” and pray when she returned to the pew. She stood for a few pictures outside of the stables near our house next to a big, worn wagon wheel set against the four-board fence. There was less rushing and the gathering, close family who had remained in our home to watch the live stream, was intimate.

I know the Church has come under criticism for closures and adherence to governors’ mandates that many would consider a vast overreach of authority. Though the Mass, for a time, was not accessible, the Church as a whole never stopped living and serving, accommodating and adjusting as best it could in unchartered territory.

The next time I help my daughter into a beautiful white dress, we will be, I believe, in a world different than today’s, albeit just as unpredictable and uncontrolled. But God is still in control and his design, imprinted on us, brought to life through the Church and the beauty of sacred tradition, will continue to supersede time in our celebration of heaven on earth.

Hope and Healing in Times of Trial [Abiding Together Podcast]

What We Learned from Life Without Mass [CFRs Video]

Currently, Ashley is a board member at a Catholic homeschool cooperative in Virginia. She homeschools her four incredible children along with her brilliant, engineer/scientist husband, who is a convert to the Catholic Faith. She is an aspiring gardener, traveler, lifelong learner, and, foremost, a disciple of the Catholic Faith.

Confession 201: How to Confess Like an Adult
Cultivating a Catholic School at Home: Pray, Serve, Gather
Visiting Mary's Final Earthly Home in Turkey
Has Ascension's free media strengthened your faith?
You can now offer ongoing support for this content with a recurring gift.
Support Ascension