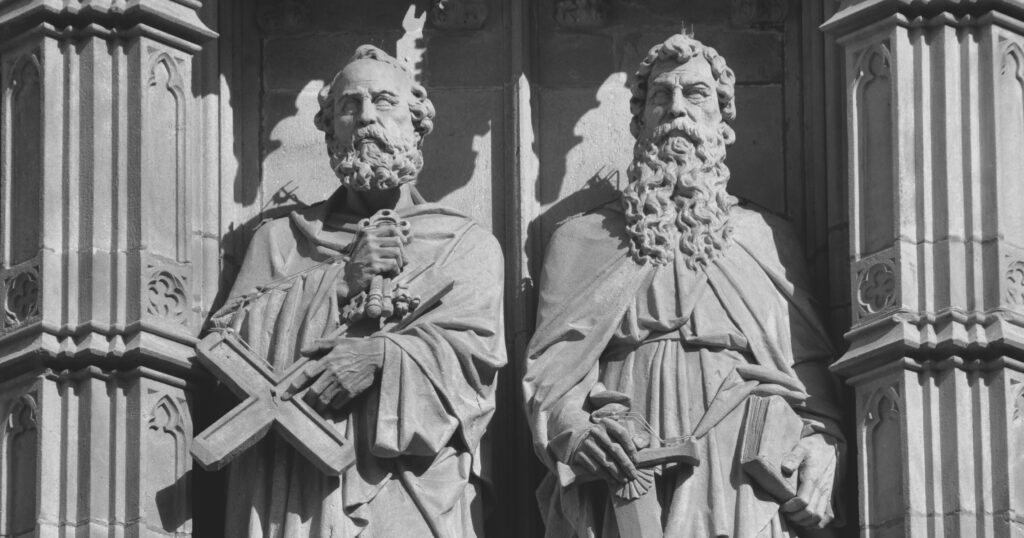 The month of June is typically a very rich time in the liturgical life of the Church, especially this year. Depending on when Easter falls, June can contain the great feasts of Pentecost and Corpus Christi, as we saw in 2020.

But we also celebrate such awesome solemnities as the Most Sacred Heart of Jesus and the Nativity of St. John the Baptist. What might get forgotten, or at least downgraded in importance, is the Solemnity of Sts. Peter and Paul every June 29. Yes, this feast day is actually a solemnity, which came as a surprise to me when I first learned about it being such! Aren’t such feasts typically reserved for those of our Lord Jesus or our Lady? What makes this special solemnity of Sts. Peter and Paul so important?

We would first do well to look to the East, specifically in the Byzantine tradition. Just take a look at how Sts. Peter and Paul are referenced during the prayers at Divine Liturgy for their feast:

“O Leaders of the Apostles and Teachers of the universe, implore the Master of all creation to grant peace to the world and great mercy to our souls.”

And at Vespers, or Evening Prayer, we hear the following:

“Let us extol Peter and Paul, those two great Luminaries of the Church, for they shine brighter than the sun in the firmament of faith.”

Clearly if these two are “Teachers of the universe” and brighter than the sun, they certainly deserve the commemoration of their feast day to be ranked among the highest of all saints on the calendar! We all know that St. Peter was given the keys to heaven as Jesus Christ’s vicar on earth, the first pope. And St. Paul himself was simply referred to as “The Apostle” in all of St. Thomas Aquinas’ writings and that of many other great Catholic theologians, even though we have the twelve other apostles to worry about! Such veneration of these great apostles was manifest very early on in the life of the Church, and their prayers constantly asked for as evidenced by the discovery of catacombs near the basilica of St. Sebastian’s in Rome. Scrawled across these walls, dating back to the third century, are many writings from those who came to participate in Mass and prayer with their brothers and sisters. One reads, “Paul and Peter, make intercession for Victor”, while another pleads, “Peter and Paul, do not forget Antonius Bassus”.

How is it that after nearly two thousand years, two mere men still continue to be venerated in such a way? The only reason is that they reflected Christ in a powerful way, and that is something each and every one of us needs to strive for. When I reflect on their title as “Luminaries of the Church”, I think of how both of these apostles were responsible for bringing the gospel to every corner of the earth, meaning that the sun constantly shines on the Church of Christ wherever you are in the world. Whether it’s Australia, Sweden, or the United States, the one sacrifice of Jesus in the Mass occurs every day no matter what part of the globe the sun is illuminating. This is because both of these illustrious apostles followed our Lord’s model of “spiritual multiplication”.

As I’ve heard it described, spiritual multiplication is the model Christ used himself, and Sts. Peter and Paul were very effective at this method as well. Keep in mind that Jesus had the seventy-two disciples, yet he called twelve men specifically to be his apostles. And even then there were three men that he spent much time with: Peter, James, and John. The apostles continued this as they evangelized, focusing on a small core of people that would then grow the Church where they had planted it, and see that spiritual multiplication keep increasing. We see St. Paul doing this with his partners such as Sts. Timothy and Titus. This should be our model as well as we evangelize the world.

Are there two or three people that we can center our attention on and walk with as we bring the illuminating message of Jesus Christ to them? Are we asking for the intercession of these two great saints often? Sometimes we see these two saints as only people to study, due to the papacy in the case of St. Peter and then the many writings left by St. Paul. But these men were evangelizers first and foremost. Like Victor and Antonius we must also ask for the help of these great teachers and apostles as we set out to live our baptismal calling. We are only human, just like Sts. Peter and Paul, and look what they were able to do with the grace of God working in their lives. They worked in cooperation with that grace, and we most assuredly can as well.

All would do well to reflect on the wise words of Pope St. John Paul II, as he asked the faithful to use these first evangelizers as an example and model when bringing light to our fallen world:

“In their apostolic mission, Sts Peter and Paul were obliged to face difficulties of every kind. But, far from deterring their missionary activity, these difficulties reinforced their zeal for the Church’s welfare and for the salvation of mankind. They were able to overcome every trial because their trust was not based on human resources but on the grace of the Lord, who, as the readings of today’s solemnity recall, delivers his friends from every evil and saves them for his kingdom (cf. Acts 12:11; 1 Tm 4:18).”

“It is this same trust in God which must also sustain us. Yes, the ‘Lord delivers his friends’. This awareness must instill courage in us as we face the difficulties encountered in proclaiming the Gospel in daily life. May our holy patrons, Peter and Paul, sustain us and obtain for us that missionary zeal which made them witnesses of Christ to the ends of the then-known world.

“Pray for us, holy Apostles Peter and Paul, ‘pillars’ of God’s Church!”

The Missions of Sts. Peter and Paul Passed on to Us

On the Solemnity of Peter and Paul

Ask a Catholic Evangelist: How Can I Share the Gospel with My Family, Parish, and Community? [EKSB Podcast]

Featured image by falco from Pixabay